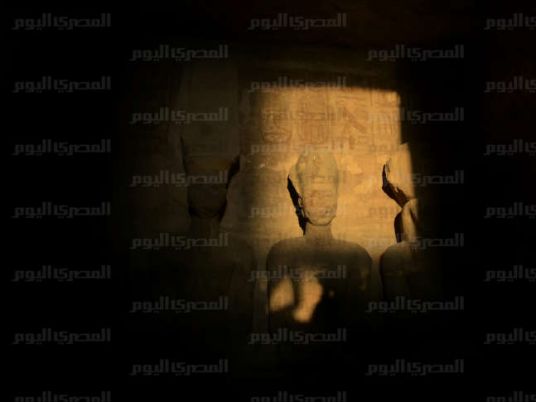 Over 3,000 tourists gathered on October 22 at the Abu Simbel temple to watch the alignment of the sun on King Ramses II's face, a phenomenon that occurs twice a year: on February 22, his assumption to the throne, and October 22, his birthday.
The phenomenon started at 5:58 am and continued for nearly 20 minutes.
The tourism, antiquities and irrigation ministers, the governor of Aswan, as well as the first French tourist group to visit Egypt since June 30, attended the event.
The Tourism and Antiquities ministries organized a sound and light show at Abu Simbel, which was attended by the tourism, antiquities and irrigation ministers and a French delegation that included 55 senior public figures, tour operators and media representatives.
Following the celebration, Antiquities Minister Mamdouh al-Damati inaugurated a visitors' center, where three statues of three figures who contributed to the rescue of the temple were placed, consisting of Professor Salim Hassan, chairman of the committee formed to study the damage arising from establishing the High Dam, former Culture Minister Tharwat Okasha and Frenchman Christian Nobel, who contributed to rescuing Nubia antiquities.
Edited translation from Al-Masry Al-Youm