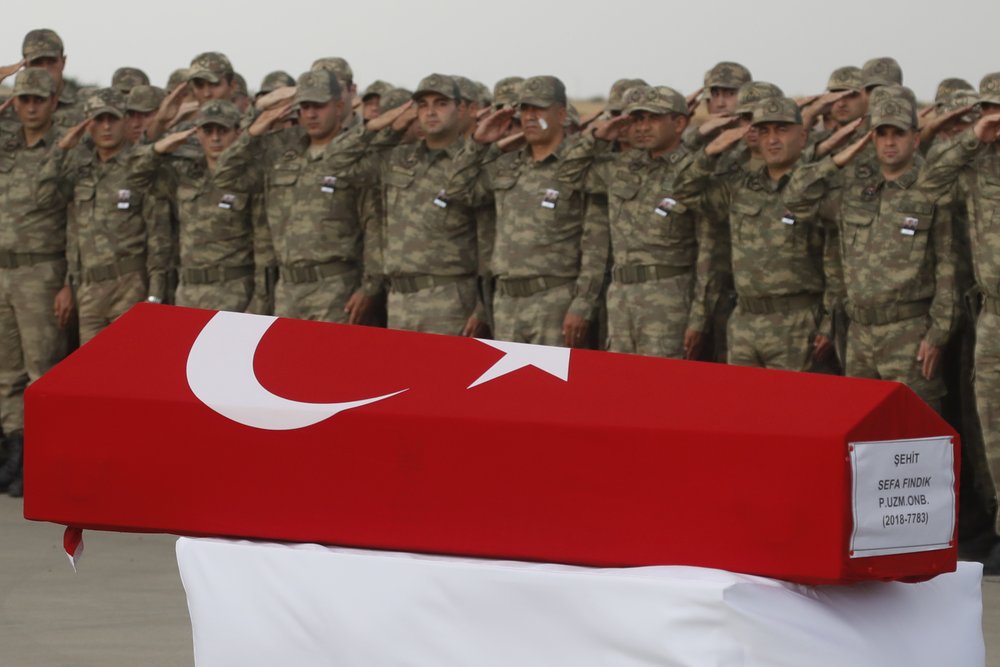 BEIRUT (AP) — The Latest on Turkey’s invasion of northern Syria (all times local):

An international aid group says about 70,000 children have been displaced since the start of the Turkish offensive in northeastern Syria. The United Nations has said more than 176,000 people have been uprooted.

Save the Children says many of the displaced have sought shelters in two dozen schools in Hassakeh city, southeast of the area where Turkey had launched an offensive earlier this month.

The aid group says power lines of a water station have been damaged by fighting, so there is no steady flow of water to the city and its surrounding areas. That’s left both the displaced and city residents dependent on water trucks.

The organization’s Syria response team director, Sonia Khush, called for unrestricted access to children in need. She said in a statement late Sunday that residents of northeastern Syria had already been reliant on humanitarian aid before the violence and were in acute need.

A cease-fire has been negotiated by the United States, securing a reduction in violence. However, it ends Tuesday.

A senior Kurdish official says his forces are complying with a U.S. brokered cease-fire and are completing the withdrawal of forces from a long a section of the shared border with Turkey.

Redur Khalil told The Associated Press Monday that Turkey however continues to violate the cease-fire, accusing its troops of shelling a village at dawn and seeking to carry out military operations.

He said the Kurdish-led Syrian Democratic Forces are preparing to complete the withdrawal from the area between Ras al-Ayn and Tal Abyad towns, which flank the 120 kilometers (75 miles) area under the cease-fire. He said the U.S. guarantor however has not forced Turkey to stick to the agreement.

Khalil called for an international mechanism to protect Kurdish residents who want to stay in their towns after Kurdish-led fighters leave.

Most civilians have pulled out from the Kurdish-dominated town of Ras al-Ayn, fearing revenge or repression from Turkey-backed forces. Turkey said it wants to return Syrian refugees to the evacuated areas, raising concerns over changing the demographic make-up of the area.

Russia’s foreign minister says Kurds in Syria should be incorporated into Syria’s legal structure so they do not pose a threat to Turkey.

Sergey Lavrov’s comments on Monday came a day before Russian President Vladimir Putin and Turkey’s Recep Tayyip Erdogan are to meet in Russia.

Turkey’s foreign minister has renewed warnings that his country will resume its military offensive in northeast Syria if Kurdish fighters don’t vacate the region before the end of a U.S.-brokered cease-fire Tuesday evening.

Lavrov told reporters that Russia’s “goal is to create a situation where all Kurdish organizations in Syria are woven into the country’s legal framework and constitution, so that there are no illegal armed units in Syria.”

Turkish President Recep Tayyip Erdogan has responded angrily to widespread criticism in the West of Turkey’s incursion into northeast Syria.

Speaking at a forum organized by Turkish TRT World broadcaster on Monday, he accused detractors of siding with “terrorists.”

Erdogan said: “The whole of the West, sided with the terrorists and have attacked us — NATO countries, European Union countries included.”

Erdogan continued: “I thought you were against terrorism and terrorists, what happened? Since when have you started to move in line with terror?”

Turkey launched an incursion into northeast Syria on Oct. 9 to drive away Kurdish fighters it considers to be terrorists. However, the Syrian Kurdish groups were a key U.S. ally in the fight against the Islamic State group.

Turkey’s military says it is closely observing the withdrawal of Kurdish fighters in northeast Syria and says it has recorded at least 125 vehicles, carrying the fighters, leaving the area.

In a statement on Monday, the military also said there had been 36 incidents of live fire violations since the United States negotiated a five-day truce under which Syrian Kurdish fighters are to pullout from the region.

Turkey has vowed to resume its offensive if the fighters don’t vacate the area by Tuesday evening, when the cease-fire ends.

U.S. President Donald Trump’s administration negotiated the accord after heavy criticism at home and abroad that it had opened the way for the Turkish invasion by abruptly removing its soldiers from northeast Syria.

Defense Secretary Mark Esper says he is discussing an option that would keep a small residual U.S. military force in northeast Syria to secure oilfields and continue the fight against Islamic State militants.

He said that he has not made a final decision on that option and has not yet presented it to President Donald Trump.

Speaking at a press conference in Kabul, Esper said that some American forces that are in northeast Syria have not yet started to withdraw. He said they are working with Syrian Kurdish fighters to secure the oilfields in that region so the oil revenues don’t fall under control of IS.

He said the troops around the town of Kobani are withdrawing first, and troops in the northeast are still in the towns near the oil.

Esper also said that the U.S. is maintaining combat air patrols over U.S. forces in Syria as the withdrawal goes on. He said the U.S. is also using overhead surveillance to try and monitor the cease-fire it brokered between Turkish and Kurdish forces “as best we can.”

Residents of a Kurdish-dominated Syrian city have pelted U.S. troops with potatoes as they drove through, apparently on their way out from Syria.

A video by the Kurdish news agency posted Monday shows a convoy of armored vehicles driving through Qamishli. Angry residents hurled potatoes at the vehicles, shouting “No America” and “America liar,” in English. One vehicle backed up over the sidewalk, trying to get away from the people.

The bulk of U.S. troops in Syria are pulling out, after President Donald Trump ordered a withdrawal following Turkey’s offensive in northeastern Syria.

The Kurdish forces, who had allied with the U.S. to fight Islamic State militants, agreed to a cease-fire brokered by Washington nine days into the Turkish offensive.

Turkey’s foreign minister has renewed warnings that his country will resume its military offensive in northeast Syria if Kurdish fighters don’t vacate the region before the end of a U.S.-brokered cease-fire Tuesday evening.

Speaking in Istanbul Monday, Mevlut Cavusoglu said: “If they don’t withdraw, our operation will re-start.”

He accused Syrian Kurdish groups of 30 live fire violations of the four-day-old truce, which killed one Turkish soldier.

He said Turkey retaliated against these attacks.

He added however, that Kurdish fighters were complying with the U.S.-backed deal and withdrawing from areas that Turkey controls following its wide-ranging incursion, launched on Oct. 9.

Turkey has demanded that Kurdish forces withdraw from a border strip in northern Syria 30 kilometers (19 miles) deep, where it intends to resettle refugees.

Photo: Turkish soldiers salute the Turkish flag-draped coffin of soldier Sefa Findik, killed in action in Syria earlier in the day, during a ceremony at the airport in Sanliurfa, southeastern Turkey, Sunday, Oct. 20, 2019. This death brings Turkey’s military death toll to seven soldiers in its wide-ranging offensive against Syrian Kurdish forces.(AP Photo/Lefteris Pitarakis)

US troops in Syria going to Iraq, not home as Trump claims