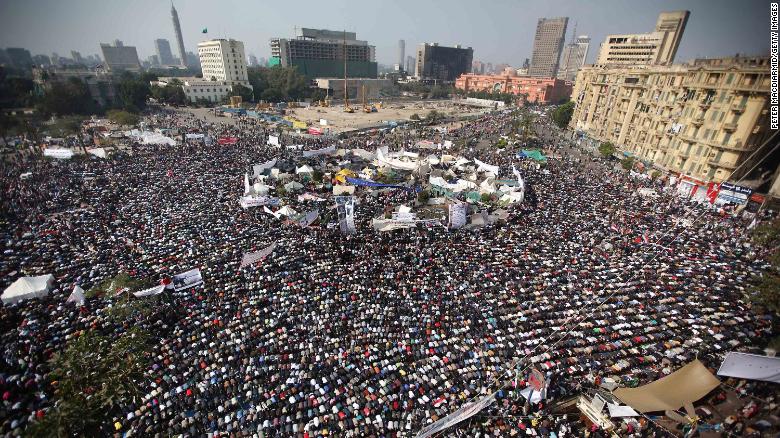 When protesters flooded the streets of Tunisia and Egypt almost a decade ago, millions across the region were glued to their television screens. A barrier of fear had been broken, and the Arab world would never again be the same.

Since then, the region has endured a painful period of transition, polarization and introspection. The protests breathed new life into civil societies, even as increasingly repressive states pushed activists to work under a cloak of secrecy, and the unrest stoked pre-existing sectarian tensions.

Pulled in multiple directions, the Arab world has been mired in various existential crises, stuck somewhere between progress and the status quo. But a shift is underway, and there is now a new power player on the scene: the people.

Few Arab countries have been left untouched by the decade’s tidal wave of popular movements.

The Arab Spring protests that washed over Tunisia, Egypt, Libya, Syria, Yemen, Bahrain and the eastern province of Saudi Arabia in 2011 achieved mixed results. While the toppling of four Arab dictators offered a brief sense of victory for protesters, a proliferation of crackdowns and new wars prompted the retreat of popular movements.

But rapidly deteriorating socioeconomic conditions meant that anti-regime demonstrations would, again, sweep the region in 2019 — this time in Algeria, Sudan, Lebanon and Iraq — ending the decade with a flourish. And protesters in this second wave have learned from the mistakes of their predecessors.

Also swept up in the tide of protests was Iran, which has been intimately involved in the power struggles of Arab countries in the region.

The 2010s were defined by “an explosion of people and their agency,” Ibrahim Halawi, teaching fellow of international relations at Royal Holloway, University of London, told CNN. “It creates a much more insecure elite. They are shocked. They are surprised. They hate us (the people) now more than ever.”

“The status quo is untenable and the elite are acknowledging this,” Halawi added. “It’s just a question of how they can survive.”

For decades, many Arab regimes had cast a long shadow over their people. Entrenched by powerful foreign backers, leaders successfully stamped out dissent and branded activists traitors, before throwing them behind bars.

They enlisted support by crafting ideologies around Arab nationalism, the plight of the Palestinians and Islam. Photographs of dictators, alive and dead, hung on the walls of almost every street, shop and office across the region.

These regimes appeared immortal. National history before their emergence rise to power was virtually erased from the textbooks, and a future without them was depicted as unimaginable.

But this sense of invincibility eventually turned into hubris and decades of corruption and mismanagement finally boiled over.It was sky-high regional youth unemployment rates — the world’s highest, at the time — that tipped the region over the edge in 2011, according to experts.

“It (the 2011 protest movement) was a combination of a rejection of stasis … and unemployment challenges, especially youth unemployment,” said Timothy Kaldas, a Cairo-based political analyst and non-resident fellow at the Tahrir Institute for Middle East Policy (TIMEP).

“That cocktail is toxic and infuriating. And once Tunisians broke that barrier of fear and demonstrated that popular uprisings can actually effect change, you saw that have a domino effect,” he told CNN.

For a while after the 2011 uprisings, it seemed that Arab countries might share a unified fate. But after toppling their leaders, Libya, Yemen, Egypt and Tunisia went down vastly different political paths.

Libya and Yemen have descended into civil war. Failed uprisings in Bahrain and eastern Saudi Arabia were followed by years-long crackdowns. In Syria, President Bashar al-Assad laid waste to huge swathes of the country as he fought an armed opposition and has managed to hold on to power.

Only in Tunisia — the first country to revolt — did an uprising lead to a new democratic transition.

The results of the first wave of Arab protests were largely discouraging, leading many to see the Arab Spring as a cautionary tale. When the demonstrations died down, the region’s traditional geopolitical rivalries took center stage once more, threatening to reinforce the status quo.

Shaking off the shackles of geopolitics

The more strategically important a country is, the harder it is for protesters to achieve meaningful change, experts argue.

“One of the key reasons why Tunisia was able to transition into a more democratic and more inclusive social contract is that it is not as involved in the geopolitical context as other countries that saw uprisings,” said Royal Holloway’s Halawi.

In all of the Arab Spring countries, regimes have tried to discredit popular movements as conspiracies. And external powers have done little to allay the regimes’ fears.

These regional actors have played a pivotal role in each of the uprisings, either by trying to bring down the regime — as seen in Saudi Arabia’s support for Syria’s armed opposition — or by propping them up — as with Iran’s intervention there on behalf of Assad.

The protesters found themselves squeezed between regional powerhouses jockeying for power and repressive regimes trying to maintain the status quo.

These same dynamics threaten to stifle the latest wave of Arab protests, according to experts.

In Lebanon and Iraq, Iran-backed political powers have attempted to cast the movements as a US-backed effort to eliminate Tehran’s regional influence and have played a role in violently repressing the protests.

In Lebanon, the Iran-backed political party and militant group Hezbollah believes the protests are — at least partially — part of an “international plan” aimed at dislodging its political presence. Supporters of the group and its allies, the Amal Movement, a Shiite political party, have repeatedly attacked protesters and destroyed protest sites around the country.

When US Secretary of State Mike Pompeo said he believed the protesters were seeking to free Lebanon from Iran’s sphere of influence, he only served to reinforce conspiracy theories that the West had coopted the movement.

“The US needs to understand that, in a context like this, their statements are fundamentally unhelpful, particularly because of the scale of their hypocrisy in these statements,” said TIMEP’s Kaldas. “They back Saudi Arabia and they talk about democracy in Lebanon or in Iran and nobody can take that seriously,” he said. “I think that’s the problem: They’ve burned their credibility.”

But there is hope. The Middle East region’s archrivals — Saudi Arabia and Iran — may soon take steps towards a rapprochement. Riyadh and Tehran have reportedly already moved towards an understanding in Yemen, where rebels are backed by Iran and the government is backed by Saudi Arabia.

Trita Parsi, executive vice president of the DC-based Quincy Institute for Responsible Statecraft, argues that the two countries may have “no choice” but to seek diplomacy, especially in the wake of this year’s attack on the kingdom’s oil facilities. Saudi Arabia blamed the attack, which knocked out half of its oil producing capacities, on Iran, an allegation Iran denied. But aside from issuing a slew of condemnations, the kingdom’s western partners have avoided coming to Riyadh’s defense.

“As long as Saudi was of the belief that the United States was going to fight Iran for Saudi Arabia … the Saudis had zero interest in diplomacy,” Parsi told CNN. “(But) things have changed profoundly. Now the Saudis realize that they have no choice.”

It’s a potential development that could bode well for protest groups, since lowering geopolitical tensions limits regimes’ ability to muddy the waters and use conspiracies as pretexts to quash such movements.

Without external interference, protesters would have greater opportunities to mobilize and participate in politics, argues Halawi, especially when facing off with regimes backed by regional powerhouses who play an active role in crushing dissent.

Geopolitical tensions typically happen under the guise of religious sectarianism — Riyadh carries the mantle of Sunni Islam and Tehran of Shia Islam. Toning down the regional rivalry could also ease sectarian tensions, allowing protest movements to reach those who would join them but don’t out of fears of sectarian threats.

The waves of protests in 2011 and 2019 have focused on a reimagining of national identities.

The demonstrations have been largely youth-focused and have engaged the masses with creative shows of unity. Urban spaces were transformed into bastions of dissent, and sectarian affiliations were cast out in favor of civic engagement that transcended religion and class.

In Sudan, protesters see Egypt’s uprising “as an emblem of political failure,” said Kaldas. One of Sudan’s more common chants was: “Either we have victory, or we have Egypt.”

While working towards democracy, the new civilian transition government has also taken steps to navigate the country’s financial dire straits. In November, Sudan eased tourist visa restrictions in an attempt to attract foreigners to the country’s pyramids. The number of tourists is expected to exceed 900,000 next year, according to Graham Abdel-Qadir, undersecretary of the ministry of information, culture and tourism.

It is too early to tell if 2019’s protest movements will fare any better than the first wave of Arab Spring demonstrations. But experts say there is a conscious effort to undo the errors of the past, especially when it comes to avoiding a slide into civil conflict.

At the first signs of unrest during the Lebanon protests, scores of mothers rallied against violence, urging restraint for fear of sparking another civil war. It was an arresting image for many in a country still scarred by the 1975-1990 conflict which left more than 100,000 dead and almost 1 million displaced.

“Algeria, Lebanon, Iraq and Sudan have all had civil conflict within living memory,” said Kaldas. “So, you’ve seen a lot of caution in all of these movements in sticking to very peaceful measures in their protests.”

Past the point of no return for people power

Protests in the region over the last decade have changed how the Arab world does politics. The people’s discontent will only grow as old rulers preside over rapidly deteriorating living conditions, and widespread anger may prove more difficult for regimes to ignore in the future.

“Widescale political protest has been introduced in an insuppressible way into the political lexicon and the palette of options that the region has to work with,” said Kaldas. “People have seen so many uprisings. They’ve been inspired by them. They’ve been scared of them and it will be part of what they think about when they consider their political problems going forward.”

The rise in people power has also changed the way the international community treats the Arab world.

“It used to be, for example, that Western media thought of Syria as Damascus. But now the world recognizes that Syria is a whole country,” said Halawi. “This decade has forced media to think about Arab countries not as states, but as people.”

When Arab streets echoed with the chant “the people want the downfall of the regime,” observers were forced to ask: “But who are ‘the people?'”

It is a question that journalists, diplomats and even locals themselves have had to grapple with.

In the seemingly endless quest for an answer, people in the region have been empowered to shake off the restraints of subjecthood and to rediscover citizenship.

Intellectual currents have throbbed back to life and young people now face the grueling task of unpacking the region’s many socioeconomic and cultural layers.

But in this messy affair, a new future for the region is no longer a glimmer on the distant horizon; it’s a light that is getting closer.

Lebanese help each other as economic crisis crushes lives

Algerian protesters keep up pressure on authorities as vote nears