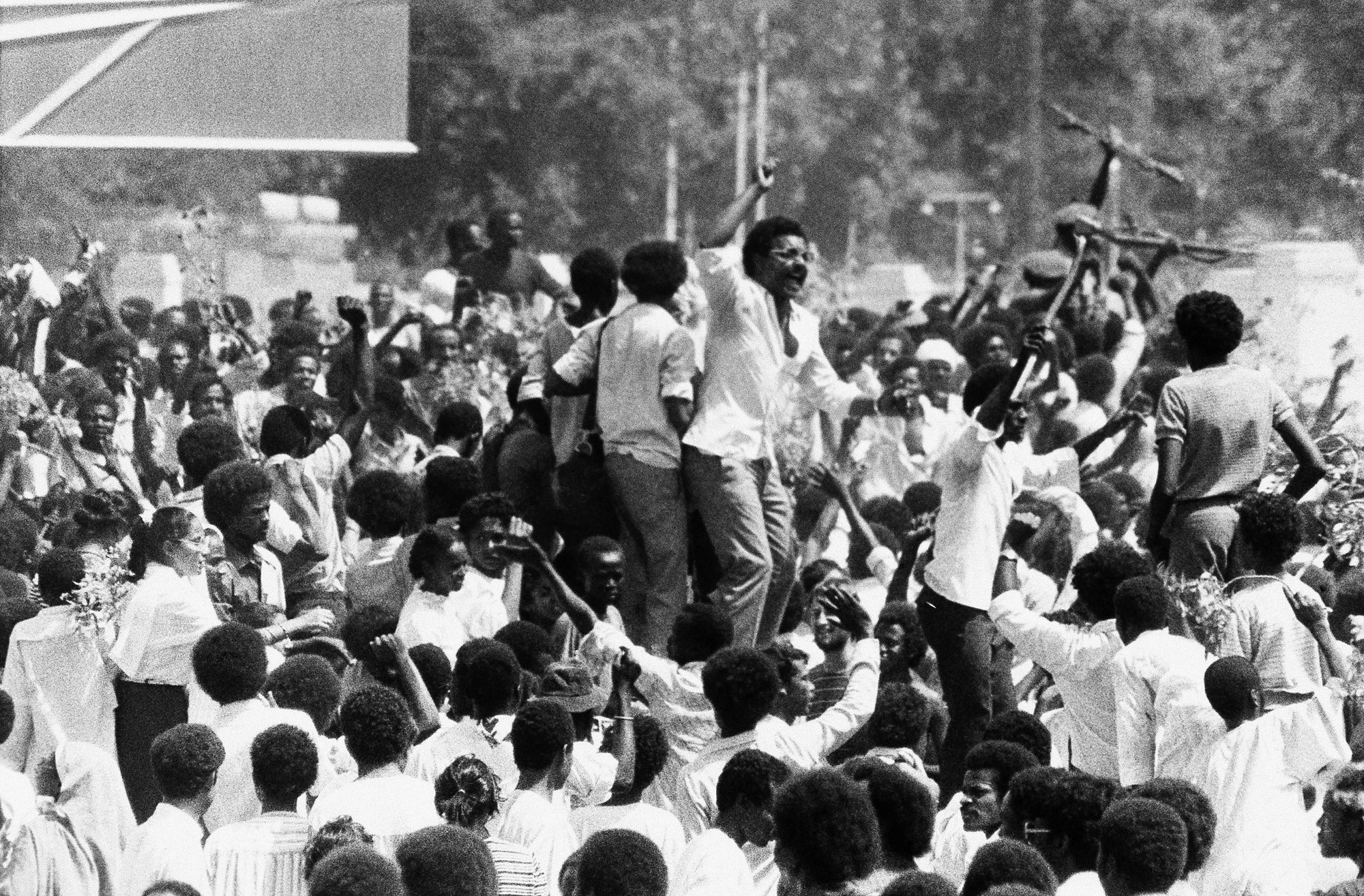 CAIRO (AP) — Sudan’s security forces violently dispersed on Monday the camp at the center of the protest movement that in April forced the army to remove Sudan’s strongman, Omar al-Bashir, after 30 years of rule — and then stayed in the streets to keep up pressure on the generals who took his place.

For months, tens of thousands in the camp and other protest sites have been demanding a speedy transition to civilian rule. The break-up of the sit-in threatens to escalate the struggle between the protesters and the army to a new, more volatile level.

Many protest leaders see the confrontation with the army as part of the struggle to purge the state’s institutions of al-Bashir’s army and Islamist supporters. The autocrat’s time in power will likely be remembered as among the most oppressive in Sudan’s modern history.

Here is a timeline of key events in the rise and fall of al-Bashir, and Sudan’s unfinished revolution:

1980s — A career army officer, al-Bashir assumes a leading role in the war against rebels in the south.

1985 — Sudanese army overthrows former President Jaafar al-Nimeiri in a bloodless coup. The army quickly hands power to an elected government, which proves dysfunctional and only rules for a few years.

1989 — Leading an alliance of the army and Islamist hard-liners, al-Bashir stages a coup against Prime Minister Sadiq al-Mahdi, dissolving the government and all political parties. He appoints himself chair of the Revolutionary Command Council for National Salvation, which rules the country, and is named defense minister.

1991 — Al-Bashir and his Islamist allies impose Islamic or Sharia law, fueling the division between the country’s Muslim, Arabized north and the mainly animist and Christian south.

2000 — Al-Bashir wins another presidential election with over 85% of the vote.

2003 — Rebel groups in Darfur attack the government in an uprising against alleged abuses and mistreatment by authorities. Al-Bashir seeks help from the Janjaweed militias, whose brutal tactics terrorize people in the region and displace more than 2 million people. A small peacekeeping force from the African Union arrives.

2005 — Under international pressure, a peace deal is reached between al-Bashir and the southern Sudanese rebel group, the Sudan People’s Liberation Army. The agreement gives southern Sudanese the right to determine whether the south would remain part of Sudan.

July 2008 — International Criminal Court’s chief prosecutor calls for an arrest warrant against al-Bashir, citing charges of crimes against humanity, war crimes and genocide in Darfur. The Sudanese government, which is not a party to the treaty creating the ICC, denies the accusations and proclaims al-Bashir’s innocence.

March 2009 — The ICC issues an arrest warrant for al-Bashir — the first time that the ICC seeks the arrest of a sitting head of state — charging him with war crimes and crimes against humanity but not genocide. Later, a second arrest warrant is issued against al-Bashir, this time with a genocide charge.

April 2010 — Al-Bashir is re-elected with about 68% of vote in the country’s first multiparty elections in more than 20 years. Two main opposition rivals withdraw over alleged fraudulent practices.

July 2011 — South Sudan gains independence after a referendum in January. South Sudan’s independence causes economic difficulties in Sudan as the new country gains control over the southern oil fields, which had accounted for three-quarters of the country’s oil production.

April 2015 — Al-Bashir wins another five-year term in a vote marred by low turnout.

November-December 2016 — Hundreds of protesters take to streets against a government decision to slash fuel subsidies, as required by the International Monetary Fund.

October 2017 — U.S. announces partial lifting of long-standing sanctions against Sudan, citing progress by Khartoum in fighting terrorism and its commitment not to pursue arms deals with North Korea.

August 2018 — Sudan’s ruling National Congress Party says it would back al-Bashir as its candidate in the 2020 presidential election.

Dec. 16, 2018 — Al-Bashir becomes the first Arab League leader to visit Syria since civil war erupted there nearly eight years ago. He is greeted at the Damascus airport by Syrian President Bashar Assad.

Dec. 19, 2018 — Anti-government demonstrations erupt across Sudan, initially over steep price rises and shortages, but soon shift to calls for al-Bashir to step down. Security forces respond with a fierce crackdown that kills dozens.

April 6 — A large sit-in protest begins outside the military’s headquarters in Khartoum. Over the next five days, security forces kill 22 people in attempts to clear the sit-in. The protests gain momentum after the resignation earlier in the week by Algeria’s President Abdelaziz Bouteflika, in power for 20 years, in response to similar demonstrations.

April 11 — Sudanese army arrests al-Bashir and says it takes over for the next 2 years, suspending the country’s constitution and closing its borders and airspace. A three-month state of emergency is also imposed.

April 12 — Gen. Abdel-Fattah Burhan replaces the coup leader who is linked to the bloodshed in Darfur, Awad Mohammed Ibn Ouf, after street rallies against him.

April 17 — Sudanese officials say al-Bashir has been transferred to a prison in Khartoum.

April 21 — Protest organizers suspend talks with the ruling military council, saying it has failed to meet their demands for an immediate transfer to a civilian government.

May 13 — Sudanese prosecutors say they have charged al-Bashir with involvement in killing and incitement to kill protesters during the uprising.

May 15 — Army and opposition leaders announce significant progress in negotiations; a three-year transition period, a Cabinet and the makeup of a 300-member, all-civilian transitional legislative body.

May 28 — Protest leaders launch a two-day general strike to press the army to hand over power to a civilian-led authority.

FILE – In this April 6, 1985 file photo, Sudanese demonstrate their joy over the coup that ended the 16-year reign of Jaafar al-Nimeiri as their country’s president. The Sudanese army ousted al-Nimeiri in a bloodless coup. The army quickly handed power to an elected government, which proved dysfunctional and only ruled for a few years.(AP Photo/Paola Crociani, File)