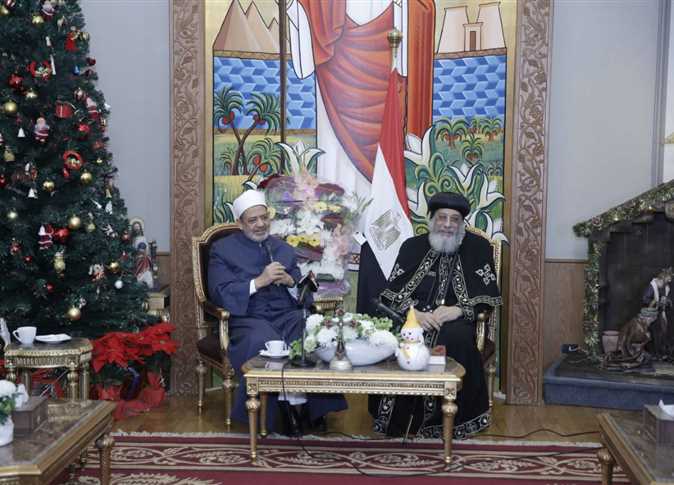 Egypt’s Grand Imam of Al-Azhar Sheikh Ahmed al-Tayyeb headed a high-level religious delegation to the headquarters of the Coptic Cathedral of St. Mark in Abbassiya to visit Pope Tawadros II, Pope of Alexandria and Patriarch of the Coptic Orthodox Church, on the occasion of Christmas.

The Grand Imam also congratulated Pope Tawadros II on the new headquarters of the Coptic Orthodox Church in the New Administrative Capital, stressing that the feelings of compassion and friendly mutual visits between Muslims and Christians are part of the teachings of Islam.

Al-Azhar teaches its scholars that divine religions emanate from one divine source and that all prophets are brothers who preached the same religion, Tayyeb said, adding that Islam is not separate from other religions, but rather a link in the chain of the divine religion.

Meanwhile, Pope Tawadros II expressed his appreciation for the sincere gesture from Tayyeb and the accompanying delegation from Al-Azhar, pointing out that the feelings of mutual love between Egyptians are a blessing from God, while the Islamic and Christian holidays and religious occasions serve as a shared opportunity to express those feelings.

Pope Tawadros II also said that the teachings of Jesus Christ call for love for others, adding that this love spreads joy and happiness throughout society, promoting the prevalence of psychological well-being and social peace.

The Grand Imam’s visits to the cathedral on various occasions contribute to spreading joy, peace and happiness in the Egyptian society, Pope Tawadros II added.