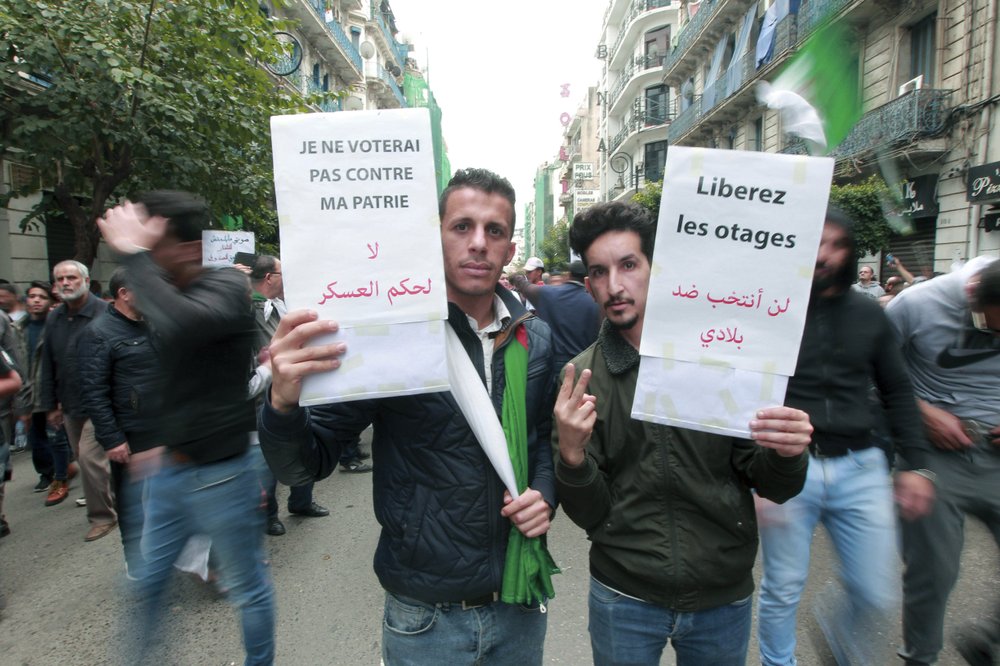 ALGIERS (Reuters) — Algeria holds a presidential election on Thursday which protesters say offers no real choice and will keep in power the ruling hierarchy they have been trying to oust in 10 months of demonstrations.

Student demonstrators again surged through Algiers on Tuesday, chanting “We will not vote” and “we want freedom”, and two former prime ministers and other senior figures were jailed for corruption in an apparent effort to mollify protesters.

Although the election is unlikely to bring political change, it could become a pivotal moment in the struggle between the protesters and the army, testing the patience of both sides in Africa’s biggest country, an important gas supplier to Europe.

The protesters forced out veteran President Abdelaziz Bouteflika in April, but view their uprising that began in February as only half-complete. They want the old guard to quit power entirely and the military to abandon politics.

With no sign of the protesters backing down and the military trying to use the election to restore order, the political system is paralyzed at a time when urgent action is needed to revive the economy, hit by a fall in vital oil revenues.

“We will see if a bad election is better than no election,” said political analyst Farid Ferrahi.

All are familiar faces regarded by the protesters as part of the old guard that has held power since Algeria won independence from France in 1962.

The protesters believe the army will continue to wield power behind the scenes after consolidating its position in the hierarchy by purging once untouchable rivals.

Its chief of staff, Lieutenant General Ahmed Gaed Salah, is now Algeria’s most powerful figure and sees the election of a new president as the best way to draw a line under a year of tumult and refresh the enduring political order.

The army has long been a core component of the “pouvoir” — or power — ruling the North African country of more than 40 million but previously had to reckon with other powerful bodies including an internal security department.

As protests gathered momentum, Gaed Salah went on television to urge Bouteflika to step down and many of the old president’s former allies were detained on corruption charges.

On Tuesday, former prime ministers Ahmed Ouyahia and Abdelmalek Sellal were among several people jailed on corruption charges which they denied.

Gaed Salah’s old rivals in the security department have also been detained in a deep cleansing of the ruling structure by the army, settling an internal power struggle.

“Bouteflika’s corrupt elite is in prison. The bad news is that there is no alternative elite,” a retired government minister said. “The system will not change, but it will adapt to changes as it has always done.”

Scores of demonstrators have been arrested. Opposition figures, journalists and even a satirical cartoonist have also been held for “undermining army morale”, and human rights groups have warned of a growing crackdown on the protesters.

Any shift after the election toward a more violent settlement of the political struggle could be disastrous.

Nobody wants a return to the 1990s civil war that killed 200,000 people, but the authorities’ ability to appease public opinion with gestures such as pay increases and free loans — as during the 2011 Arab Spring — may be limited now.

Algeria gets 95% of its foreign revenue from oil and gas sales, which since a slide in energy prices in 2014 have halved to $30 billion a year.

Image: Algerian demonstrators take to the streets in the capital Algiers to protest against the government and reject the upcoming presidential elections, in Algeria, on Friday, Nov. 22, 2019 (AP Photo/Fateh Guidoum)

Algerian protesters keep up pressure on authorities as vote nears