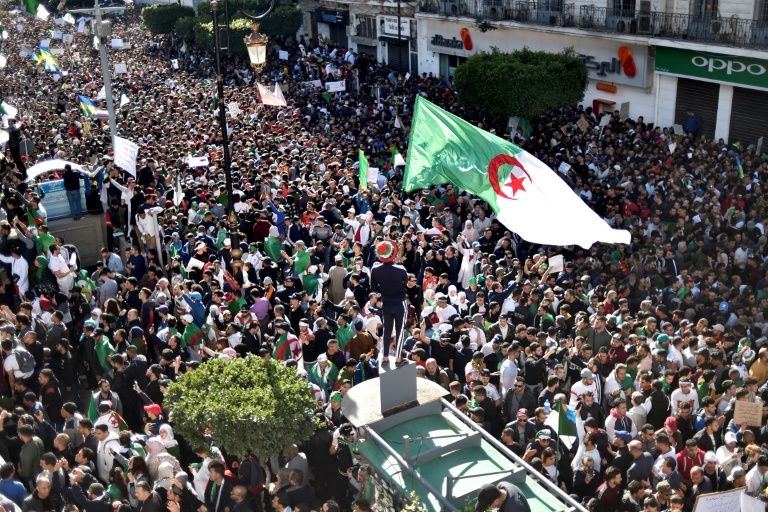 A huge crowd of demonstrators marched through the Algerian capital for a fourth consecutive Friday to step up demands on President Abdelaziz Bouteflika to leave, rejecting his offer not to seek re-election.

Men, women and children converged in a festive atmosphere outside Algiers’ iconic main post office calling on the 82-year-old not to cling to power after scrapping an April presidential poll.

Security sources said crowd numbers exceeded demonstrations a week ago that saw tens of thousands of people across the country take to the streets.

The latest rallies were the first major test of whether Bouteflika has calmed public anger with his surprise announcement on Monday that he would not stand for a fifth term but was cancelling the upcoming election.

“You pretend to understand us, we will pretend to listen to you,” read a banner held aloft by the mostly young demonstrators.

Bouteflika had initially sparked joy among protesters when he said he would not stand again, but his move to cancel the vote prompted accusations of “tricks” and sparked a new round of demonstrations.

He has also named a new prime minister, replacing unpopular premier Ahmed Ouyahia with former interior minister Noureddine Bedoui, who on Thursday defended the postponement of the poll.

Bouteflika, who uses a wheelchair and has rarely appeared in public since suffering a stroke in 2013, has promised a “national conference” to carry out reforms.

The president said that new elections would be held “before the end of 2019”, suggesting he may stay in office for months longer.

Friday’s protest in Algiers was mostly peaceful but on the margins around a hundred youths threw stones at police in clashes that lasted around 30 minutes and left several people wounded.

Afterwards dozens of young people armed with plastic bags cleaned up the streets, while in the city center volunteers picked up rubbish after protesters went home at nightfall.

During the demonstrations, many protesters criticized France’s stance on the political crisis in Algeria, its former colony, accusing Paris of siding with Bouteflika.

“France, 132 years is enough, stop the interference,” read one banner, referring to the era of French rule before independence. “Macron, you are too small for today’s Algeria.”

Algeria has largely avoided the turmoil unleashed by the Arab Spring uprisings that brought down rulers in neighboring Tunisia and Libya.

But discontent, particularly among the young, turned to anger after the veteran leader announced on February 10 that he would seek another term.

Demonstrations have drawn tens of thousands for each of the last three Fridays, with smaller rallies taking place on other days.

The protest movement has been led by students, in a country where half the population is under the age of 30 and youth unemployment has spurred anger against a government seen as out of touch.

Several demonstrators on Friday said they had traveled from the Kabylie area, 100 kilometers (60 miles) east of Algiers, and spent the previous night with friends in the capital to avoid roadblocks or bus stoppages.

As at previous rallies after the weekly prayers, Algeria’s ubiquitous red-white-green flag fluttered from windows and balconies of buildings leading to the city center.

Algeria’s new prime minister on Thursday sought to calm tensions ahead of the new demonstrations that could prove decisive for the protest movement.

Bedoui warned at a news conference that the situation was “sensitive” in the North African country.

People “must show calm and act peacefully”, he said, calling for “dialogue” to resolve the situation.

“The absolute priority is to reunite the Algerians and allow them to go together towards a better future,” he said. “It’s not about staying in power for a few weeks or a few months more.”

But al-Watan newspaper on Friday fired back with a “Get Out” message to the new leadership, charging Bedoui had “ducked the real questions” facing the country.

The assessment was also harsh on social media, with one commentator in a tweet sarcastically thanking Bedoui and Lamamra for their “efforts to keep Algerians mobilized” for Friday’s protests.

Algeria ruling party turns its back on Bouteflika: he is 'history'