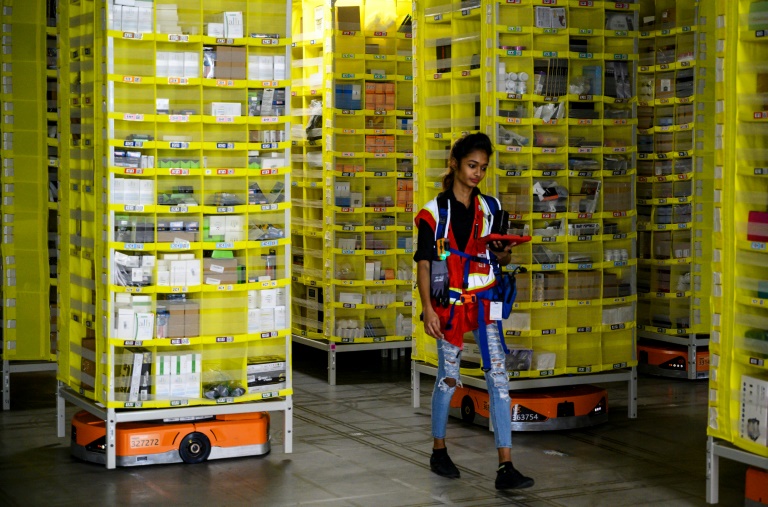 Hundreds of orange robots zoom and whiz back and forth like miniature bumper cars — but instead of colliding, they’re following a carefully plotted path to transport thousands of items ordered from online giant Amazon.

A young woman fitted out in a red safety vest, with pouches full of sensors and radio transmitters on her belt and a tablet in hand, moves through their complicated choreography.

This robot ballet takes place at the new Amazon order fulfillment center that opened on Staten Island in New York in September.

In an 80,000 square-meter (855,000 square-foot) space filled with the whirring sounds of machinery, the Seattle-based e-commerce titan has deployed some of the most advanced instruments in the rapidly growing field of robots capable of collaborating with humans.

The high-tech vest, worn at Amazon warehouses since last year, is key to the whole operation — it allows 21-year-old Deasahni Bernard to safely enter the robot area, to pick up an object that has fallen off its automated host, for example, or check if a battery needs replacing.

Bernard only has to press a button and the robots stop or slow or readjust their dance to accommodate her.

“What used to take more than a day now takes less than an hour,” he said, explaining they are able to fit about 40 percent more goods inside the same footprint.

For some, these fulfillment centers, which have helped cement Amazon’s dominant position in global online sales, are a perfect illustration of the looming risk of humans being pushed out of certain business equations in favor of artificial intelligence.

But Brady argues that robot-human collaboration at the Staten Island facility, which employs more than 2,000 people, has given them a “beautiful edge” over the competition.

Bernard, who was a supermarket cashier before starting at Amazon, agrees.

“I like this a lot better than my previous jobs,” she told AFP, as Brady looked on approvingly.

What role do Amazon employees play in what Brady calls the human-robot “symphony?”

In Staten Island, on top of tech-vest wearers like Bernard, there are “stowers,” “pickers” and “packers” who respectively load up products, match up products meant for the same customers and build shipping boxes — all with the help of screens and scanners.

At every stage, the goal is to “extend people’s capabilities” so the humans can focus on problem-solving and intervene if necessary, according to Brady.

At the age of 51, he has worked with robotics for 33 years, previously as a spacecraft engineer for MIT and on lunar landing systems of the Draper Laboratory in Massachusetts.

He is convinced the use of “collaborative robots” is the key to future human productivity — and job growth.

Since Amazon went all-in on robotics with the 2012 acquisition of logistics robot-maker Kiva, gains have been indisputable, Brady says.

“It’s a myth that robotics and automation kills jobs, it’s just a myth,” according to Brady.

“The data really can’t be denied on this: the more robots we add to our fulfillment centers, the more jobs we are creating,” he said, without mentioning the potential for lost jobs at traditional stores.

For Brady, the ideal example of human-robot collaboration is the relationship between “R2D2” and Luke Skywalker from “Star Wars.”

Their partnership, in which “R2D2” is always ready to use his computing powers to pull people out of desperate situations “is a great example of how humans and robots can work together,” he said.

But despite Brady’s enthusiasm for a robotic future, many are suspicious of the trend — a wariness that extends to the corporate giant, which this month scrapped high-profile plans for a new New York headquarters in the face of local protests.

Attempts by Amazon employees to unionize, at Staten Island and other sites, have so far been successfully fought back by the company, further fuelling criticism.

At a press briefing held last month as part of the unionization push, one employee of the facility, Rashad Long, spoke out about what he said were unsustainable work conditions.

“We are not robots, we are human beings,” Long said.

For Kevin Lynch, an expert in robotics from Northwestern University near Chicago, the development of collaborative robots is “inevitable” and will indeed eventually eliminate certain jobs, such as the final stage of packing at Amazon for instance.

“Robotics and artificial intelligence bring clear benefits to humanity, in terms of our health, welfare, happiness, and quality of life,” said Lynch, who believes public policy has a key role to play in ensuring those benefits are shared, and that robotics and AI do not sharpen economic inequality.

“The growth of robotics and AI is inevitable,” he said. “The real question is, ‘how do we prepare for our future with robots?”

Machines will do more tasks than humans by 2025: WEF