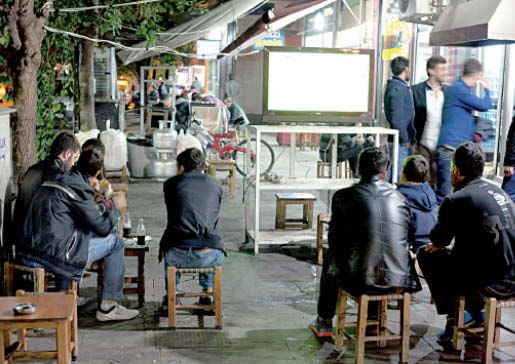 Remzi, a 26-year-old Kurd from southeast Turkey, has a pretty typical life story for someone like him. A child during the brutal 1990s, when paranoia and military violence ravaged Turkey, Remzi and his family were forced to leave their village for urban shantytowns. Their village was later burned to the ground.

Unable to afford to raise their children in the city, Remzi’s parents shipped him and his siblings to the nearest state-run boarding school, a cluster of drab buildings surrounded by barbed wire and military guards, where Remzi would live until his high school graduation. The harsh discipline and daily violence inside the school, coupled with the shadowy decade that catapulted him into its walls, form the core of Remzi’s identity as a young Kurd in Turkey.

“We are born among the stones,” Remzi says. “Our toys are stones, trees, sticks.”

Remzi is one of dozens of youth in Turkey interviewed for “Between Imaginaries and Encounters: Young People from Diyarbakir and Mugla Speak,” a project collecting two years worth of oral histories from both Turkish and Kurdish youth. The results, which were displayed in Istanbul’s Matzo Factory gallery and will soon be published in a book, are a teetering, sky-high stack of Russian dolls, each encounter revealing another and another inside that.

The story of the youth of Turkey is also the story of a young nation. Turkey, after all, is not even 100 years old and while these young people struggle to define their identities and hopes and fears, the country they live in likewise copes with its own small and massive metamorphoses, its own schizophrenia and its responsibilities, and its own adolescence.

On the forefront — more important than Syria, the European Union and the Arab Spring — there is Turkey’s relationship with its Kurdish minority, an oppression that has grown into a seemingly endless civil war, and whose collateral damage Remzi and millions like him so poignantly embody.

In the Matzo Factory, their words — compiled on large posters and small sheets that patrons could tear off the wall and take with them, as well as looping video interviews — gave testimony to the everyday lives of Kurds and Turks living in the changing nation. The display was also an education; a small room served as a library, offering companion books and articles to the interviews. For this particular academic project, a gallery was an apt home. The lives are art.

“The stories are like set pieces,” Leyla Neyzi, a professor at Istanbul’s Sabanci University who oversaw the project, says. “The Kurdish young people have performances, they all have the same story. It starts, ‘My first day at boarding school, I didn’t speak Turkish. They beat me for not speaking Turkish.’ It is a very violent story.”

In Turkey, there are two realities. The first touts a strong Turkish army determined to fight the terrorist Kurdish Workers’ Party, or PKK, who threaten Turks from their remote headquarters in Iraq’s Qandil mountains. The second attributes terrorism not to the PKK but to the Turkish state, whose warplanes fly daily over Kurdish villages on their way to Qandil; in this narrative, the PKK leads a Kurdish revolution.

Neyzi, a trained anthropologist, began the project as a way to explore the recessed memories of the 1990s, a decade following a military coup in which the country was violently reshuffled and its opposition silenced by a strong-armed and paranoid military. It’s an era which Turks — whose attachment to an infallible and pure Turkish identity is fundamental to a functional country — would prefer to forget, and which Kurds feel they cannot afford to let go of.

“How do we remember the history of our republic? What does it mean to be a Turk? What does it mean to be an ‘other’?” are the questions Neyzi hoped to chip away at by moving herself and her crew of social science students to Diyarbakir in the Kurdish southeast and Mugla in the Turkish west, befriending the local youth and the conducting hours-long interviews she likens to psychoanalysis.

Like a good analyst, Neyzi unearthed history. Sometimes memories, like Remzi’s, were bubbling on the surface, evidence of a long-simmering pot. Other times, they were vague and buried sensations pieced together by interviewees the way a blind-folded taster can identify each ingredient in a stew and, only at the end, recognize it as food.

“One young woman I interviewed burst into tears before anything could happen,” Neyzi says. “She told me a story from her childhood which she hadn’t told anyone else and couldn’t share with her family. She was 4 or 5 years old, and she remembers sounds mostly, the sound of fighting at night, very, very loud noises, followed by the wailing of women toward morning. When she asked her parents about this, they said the army went around with taped noises to frighten the population. Or they said she was exaggerating. To this day she wasn’t sure whether it happened or whether she invented it.”

“Sense memory,” Neyzi continues, “are the things we don’t understand but that stay with us. The woman told me her parents don’t know who she is. Whenever the violence is brought up, they are silent. Then she said, ‘I don’t know why I’m telling you this.’”

What separates Neyzi’s interviewees from their parents is crucial to understanding Kurdish youth in Turkey today; it’s the difference between those old enough to have withstood and rejected grand violence, and those who are obsessed with a violence they narrowly avoided.

The Kurdish youth Neyzi’s team interviewed are activists. They are politicized, alienated, and as deeply concerned with their identity as Kurds as they are resentful of their parents for assimilating. They rebel against those submissions, but also, Neyzi says, against the traditions of those only marginally older than them — aunts, uncles, older siblings — whose radical politics often led them to join the ranks of the PKK in the mountains and die. Instead, the Kurdish youth want to bring their fight to the halls of universities and the floor of parliament.

Further west, in the other Turkey, the youth of Mugla struggle with different issues, primarily economic ones.

“In Mugla, being young means something very different,” Neyzi says. “You have a completely different relationship with time. Kurdish young people aren’t young, they are very old. They have the burden of collective memory. Their stories are like they have lived several lives. In Mugla, they fit much more our conception of youth culture. They’re not sure why they are interesting. They’re more focused on their every day lives and their plans for the future.”

Diyarbakir is a city dominated by the political lives of the Kurds who live there. Mugla, on the other hand, is molded by tourism and the jobs and migration inspired by that industry.

The youth in Mugla were also preoccupied by the Kurdish issue, but their discussion of it was condemning, bitter and exactly like their parent’s generation. Their racism, Neyzi says, was overt and unapologetic.

“That’s what’s really terrifying,” she says. “They’re not ashamed of what they’re saying.”

Neyzi was disturbed by the responses, but not shocked. The Kurdish issue — particularly with regard to the 1990s — has mostly been steeped in silence and taboo. Part of the impetus behind the project was to give voice to the ignored or maligned youth of Turkey.

But with the violent Kurdish struggle continuing in spite of new dialogue, and the Turkish judicial system gaining momentum in a massive court case designed to imprison activists and politicians, precisely those change-makers Neyzi’s subjects aspire to be, the voices of these youth and the power individual stories can have in at least slowing down oppression, may have come much too late.

“Once I conducted an interview with a young Kurdish man in a very small room. He had a water bottle with him, which I later learned was vodka, and he was drinking it in the morning. This guy was really self-destructive,” Neyzi says. “He sat down and said immediately, ‘Before you say anything, let me say something to you. Where were you in the 1990s?’ His voice was very accusatory.”

She sits back in her chair, remembering the young man’s agitation, how valid she still feels it was.

“The implication was that Kurds experienced this terrible violence in the 1990s and it took 20 years for Turkish social scientists to wake up,” she says. “I sat in silence for a bit. I use silence a lot in my interviews, and I didn’t want to seem defensive. And then I said, ‘You are right. You are absolutely right.’ And then we started the interview.”