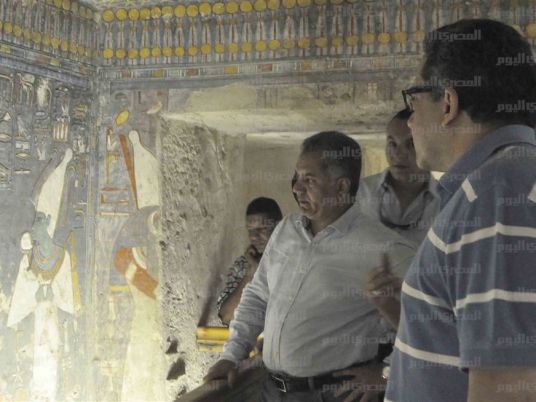 Antiquities Minister Mamdouh el-Damati announced the discovery of a large wooden boat in Abusir area, south of the Mastaba, as part of excavations carried out by the Czech Institute of Egyptology, affiliated to the Faculty of Arts at Charles University in Prague.
Damati stressed the importance of the discovery, being the only discovered boat dating back to the Old Kingdom that has been discovered near a non-royal Mastaba, which also underlines the importance of the owner of the Mastaba and his prestige during the era of the Old Kingdom and his close relationship with the king.
What distinguishes the boat the most are wooden wedges and some ropes that combine panels together, said the minister.
He pointed out that the ropes and wedges are still in their original position, which contributes significantly to knowing how ancient Egyptians built their boats, since most of the discovered boats so far were either in a poor state of preservation or disassembled, except for the boat of King Khufu, according to Damati.
The Czech mission discovered the Mastaba in 2009, said Afify.
The Czech mission conducted its excavation in 2015 in the area to the south of the Mastaba (AS 54), where it discovered an 18-meter-long boat in addition to some pottery, which suggested a close link between the Mastaba, the boat and the pottery as all of them date back to the end of the Third Dynasty or the beginning of the Fourth Dynasty of the Old Kingdom, about 2550 BC, said Mahmoud Afify, head of the Egyptian Antiquities Sector.
The name of King Huni of the late Third Dynasty was found engraved on a stone vase inside a compartment at the northern borehole, which indicates that Abusir region is a cemetery for ancient Egyptian senior state officials, according to Afify.
Miroslav Barta, head of the Czech mission, said the Czech Institute of Egyptology will launch a project this year to study the techniques that were used in the construction of the discovered boat, in collaboration with the Institute of Nautical Archaeology (INA) from the University of Texas.