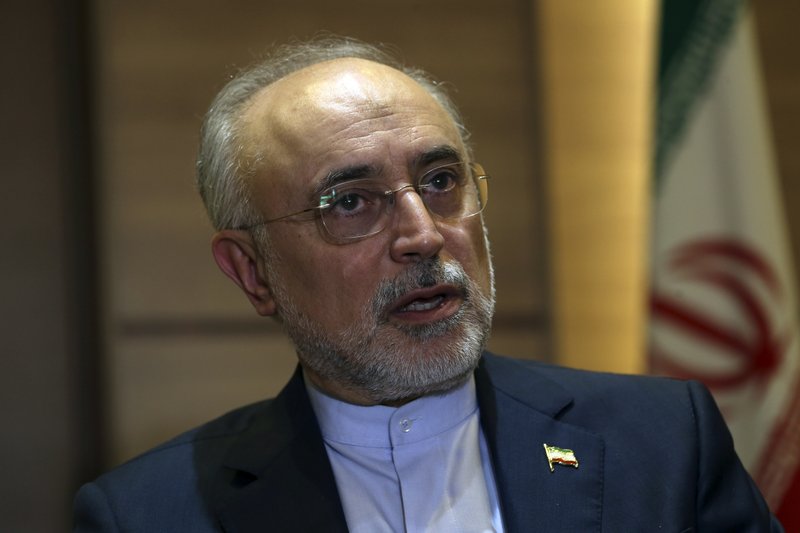 TEHRAN, Iran (AP) — Iran’s nuclear chief told The Associated Press on Tuesday that he hopes the atomic deal between Tehran and world powers survives, but warns the program will be in a stronger position than ever if not.

The remarks by Ali Akbar Salehi, who also serves as a vice president to Iran’s elected leader Hassan Rouhani, come as Iran tries to salvage an accord now challenged by President Donald Trump.

The American withdrawal from the deal and the return of US sanctions already has badly shaken Iran’s anemic economy, crashing its rial currency. Further sanctions coming in November threaten Iran’s oil industry, a major source of government funding, and will further pressure the relatively moderate Rouhani.

For his part, Salehi sought to contrast Iran’s behavior, which includes abiding by the atomic accord, against “emotional moves and sensational moves.”

“I think (Trump) is on the loser’s side because he is pursuing the logic of power,” Salehi told the AP in an exclusive interview in Tehran. “He thinks that he can, you know, continue for some time but certainly I do not think he will benefit from this withdrawal, certainly not.”

Salehi heads the Atomic Energy Organization of Iran, whose Tehran campus encompasses a nuclear research reactor donated to the country by the US in 1967 under the rule of the shah. But in the time since, Iran was convulsed by its 1979 Islamic Revolution and the subsequent takeover and hostage crisis at the US Embassy in Tehran.

For decades since, Western nations have been concerned about Iran’s nuclear program, accusing Tehran of seeking atomic weapons. Iran long has said its program is for peaceful purposes, but it faced years of crippling sanctions.

The 2015 nuclear deal Iran struck with world powers, including the US under President Barack Obama, was aimed at relieving those fears. Under it, Iran agreed to store its excess centrifuges at its underground Natanz enrichment facility under constant surveillance by the United Nations’ nuclear watchdog, the International Atomic Energy Agency. Iran can use 5,060 older-model IR-1 centrifuges at Natanz, but only to enrich uranium up to 3.67 percent.

That low-level enrichment means the uranium can be used to fuel a civilian reactor but is far below the 90 percent needed to produce a weapon. Iran also can possess no more than 300 kilograms (660 pounds) of that uranium. That’s compared to the 100,000 kilograms (220,460 pounds) of higher-enriched uranium it once had.

Salehi spoke about Iran’s efforts to build a new facility at Natanz that will produce more-advanced centrifuges, which enrich uranium by rapidly spinning uranium hexafluoride gas.

For now, the nuclear accord limits Iran to using a limited number of an older model, called IR-1s. The new facility will allow it to build advanced versions called the IR-2M, IR-4 and IR-6. The IR-2M and the IR-4 can enrich uranium five times faster than an IR-1, while the IR-6 can do it 10 times faster, Salehi said.

“This does not mean that we are going to produce these centrifuges now. This is just a preparation,” he said. “In case Iran decides to start producing in mass production such centrifuges, (we) would be ready for that.”

Salehi suggested that if the nuclear deal fell apart, Iran would react in stages. He suggested one step may be uranium enrichment going to “20 percent because this is our need.” He also suggested Iran could increase its stockpile of enriched uranium.

In the wake of Trump’s decision, Western companies from airplane manufacturers to oil firms have pulled out of Iran. Iran’s rial currency, which traded before the decision at 62,000 to $1, now stands at 142,000 to $1.

Despite that, Salehi said Iran could withstand the economic pressure, as well as restart uranium enrichment with far-more sophisticated equipment.

“If we have to go back and withdraw from the nuclear deal, we certainly do not go back to where we were before,” Salehi said. “We will be standing on a much, much higher position.”

Still, danger could loom for the program. A string of bombings, blamed on Israel, targeted a number of scientists beginning in 2010 at the height of Western concerns over Iran’s program. Israel never claimed responsibility for the attacks, though Israeli officials have boasted in the past about the reach of the country’s intelligence services.

“I hope that they will not commit a similar mistake again because the consequences would be, I think, harsh,” Salehi warned.

US to help nations replace Iran oil, may consider waivers

Iran summit seeks to avert a bloodbath in northwestern Syria