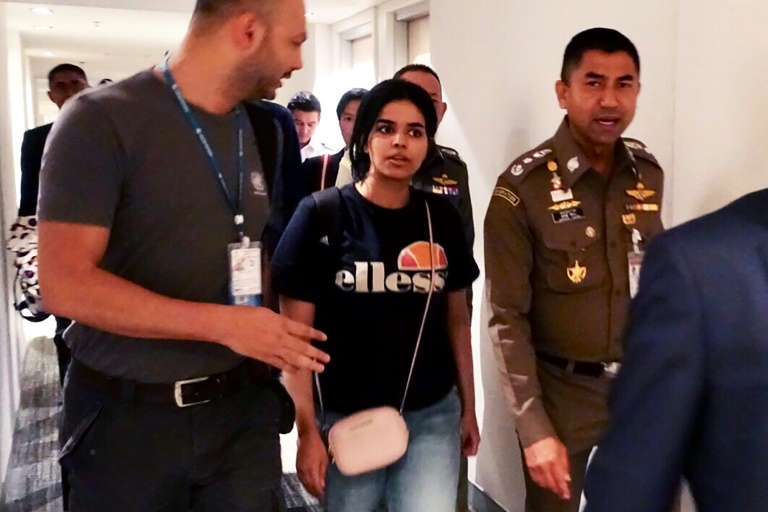 Australia said Tuesday it will “carefully consider” the asylum claim of an 18-year-old Saudi woman who fled alleged abuse from her family and is now in the care of the UN in Bangkok, after she fended off deportation in a gripping, live-tweeted ordeal.

Rahaf Mohammed al-Qunun arrived at the Thai capital’s main airport on a flight from Kuwait over the weekend after running away from her family, who she says subjected her to physical and psychological abuse.

Qunun said she planned to seek asylum in Australia, fearing she would be killed if repatriated by Thai immigration officials who stopped her at the airport.

Saudi Arabia’s human rights record has been under heavy scrutiny since the murder of journalist Jamal Khashoggi last year.

The ultra-conservative kingdom has some of the world’s toughest restrictions on women, including a guardianship system that allows male family members to make decisions on behalf of female relatives.

On Sunday Thai authorities said Qunun would be sent back to Saudi Arabia, but they abruptly changed course as her plight pinballed across social media.

Qunun posted dozens of tweets and live videos in English and Arabic, some describing how she had barricaded herself in a hotel room. Her account quickly racked up tens of thousands of followers, feeding an international media frenzy.

On Monday she was allowed to leave the airport in the care of the UN’s refugee agency.

The Australian government on Tuesday teased the possibility of granting the young woman refugee status, saying it was “pleased” the UN was assessing her claim.

“Any application by Ms Al-Qunun for a humanitarian visa will be carefully considered once the UNHCR process has concluded,” a Department of Home Affairs official told AFP.

As for providing security in light of Khashoggi’s murder in the Saudi consulate in Istanbul, he said “that’s the Thai government’s job and I hope that’s being looked into”.

Thailand is not a signatory to a UN convention on refugees, and asylum seekers are typically deported or wait years to be resettled in third countries.

The UNHCR insists anyone with an asylum claim should not be sent back to the country they fled under the principle of non-refoulement.

In a short press release distributed to media outside its embassy in Bangkok Tuesday, the Saudi government said it had not demanded her deportation, adding the case is a “family affair”, but under the “care and attention” of the embassy.

In an earlier and separate explanation released on Twitter, the embassy also denied sending officials to Suvarnabhumi airport to meet Qunun as she arrived or impounding her passport — as she alleged.

It also said the embassy had made contact with her father, a senior regional government official in the kingdom, “to inform him on her situation”.

He said he would talk to the UN refugee agency about a potential meeting between the family members.

“Rahaf is not a political asylum case,” he insisted. “It is not political at all.”

He added that the Saudi government “agrees that there should be a priority on Rahaf’s safety”.

The immigration police released photos of Surachate and his team sitting down with Saudi embassy charge d’affaires Abdalelah Mohammed Alsheaiby.

Her father and brother are “the two male relatives (Qunun) most fears” and could “physically harm her in an effort to compel her to return”, said Human Rights Watch’s Phil Robertson, who has been in contact with her since she started live-tweeting her ordeal.

“She’s an adult woman who has escaped Saudi Arabia’s repressive and discriminatory ‘guardianship’ laws and these men must recognize the rules have changed,” he said, adding it is “solely her decision” whether or not to meet them.

Qunun has said she believes she will be imprisoned or killed if sent back, and that her family is so strict they once locked her in a room for six months for cutting her hair.

A Change.org petition to grant Qunun asylum in Britain has so far garnered more than 80,000 signatures.

Thailand says Saudi woman in asylum case to be sent back