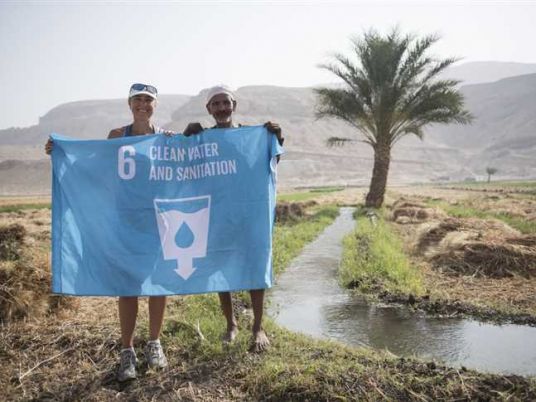 Mina Jolie, an Australian activist and lawyer, ran 300 kilometers along the Nile River through Cairo, Luxor and Aswan as part of her initiative to change global perceptions of water usage and consumption.

In a press conference on Sunday, Jolie said her global initiative entitled "Run for Water" aims to raise awareness and provide solutions that effectively contribute to solving the global crisis of water scarcity.

The 46-year-old Australian activist launched her initiative at the end of March, the goal of which is to shed light on the sixth United Nations Sustainable Development goals that urge the world to ensure water availability and sanitation services for all. The "Run for Water" initiative is 1,048 miles long including 40 marathons over 40 days running across six continents around the world.

Jolie plans to run along rivers in Brazil, Australia, China, Egypt and the United Kingdom over the course of six weeks to draw the attention to the initiative's goal and call on all concerned bodies to cooperate in order to ensure clean water availability and sanitation for everybody.

Egypt is the penultimate station in her long journey which already began on March 22 on the banks of the Nile River in Luxor and Aswan and ended in Cairo.

According to a press statement released by Luxor Governorate, Jolie said she was very happy to be in Luxor; she enjoyed a breathtaking view of the Nile and warm, welcoming reception from the friendly locals.

"Jolie has successfully finished her tour in Egypt and she will fly to England to resume her journey running along the River Thames in London; the capital's river is 346km long and considered the longest river in England and the second longest river in the United Kingdom," said Mahmoud Ezz el-Din, one of Jolie's companions.

Jolie said the problem of global water shortage allows an opportunity for innovation and leadership. If all parties do not work together to solve this problem, the world will face a global crisis that would be difficult to fix it by 2030 when water demand is expected to surpass 40 percent.

"According to recent statistics, there are 650 million people around the world living without water and by 2025 one-third of the world's population will suffer from this problem," Jolie said.

On World Water Day 2012, Jolie launched "Thirst Foundation" to create a base of people and companies to work together to change consumer habits and attract societies to the sustainable water products.