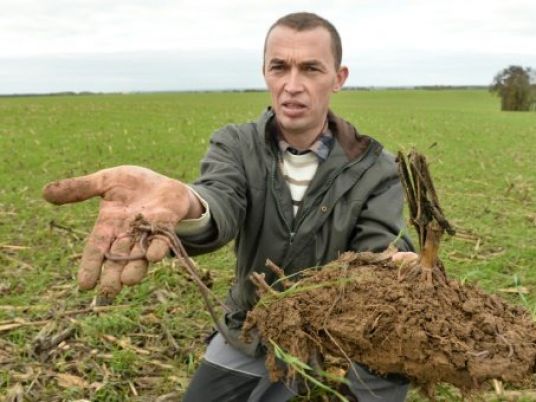 Nicolas Denieul plants his spade in the ground and turns over a clod of soil to reveal a mass of earthworms seething around plant roots — fat ones and thin ones, delicate translucent violet and dark brown.
"That is magnificent. Ten years ago, I never thought I'd see anything like that!" said Denieul, a cheerful French farmer, his hands full of earth in the biting wind.
For 10 years ago, there were no worms roaming about his land, near the western city of Le Mans, where he grows wheat, corn and rapeseed to feed the 350 pigs he and his brothers keep.
Back then his spade met smooth earth, empty of worms, insects and the other small organisms that signify a healthy soil.
Like forests and oceans, soils also capture carbon, through the vegetable matter that decomposes in them. Instead of being released in the form of gases that contribute to global warming, carbon stocked in soil nourishes plants.
An increase of 0.4 percent a year in the level of carbon in soils would make it possible to stop the current growth of carbon dioxide — a major greenhouse gas — in the atmosphere, according to the French National Institute for Agricultural Research (Inra).
France's agriculture ministry launched an international research program on the subject this year, which 40 countries signed up to at the ongoing UN climate talks in Paris.
End of ploughing
On top of urbanization and deforestation, soils around the world have suffered as a result of the intensification of farming since World War II.
"We have massacred the soil" with bigger combine harvesters, deeper ploughing and chemical fertilizers and pesticides, Denieul said.
These factors have had a devastating effect on the topsoil — the most important layer, where worms absorb and digest dead plant matter, transforming it into natural fertilizer that they spread through the earth.
For Denieul, the eureka moment came in the mid-2000s, after he heard a Canadian expert explain that in just a small quantity of soil there were more living organisms than people on the whole planet.
After this, Denieul radically changed the way he worked. With some colleagues he decided to stop ploughing. A huge step, taken with the help of Base, a network that promotes farming based on soil conservation.
"The plough turns the soil to a depth of 25 centimetres. We had to find seed drills that disturbed the earth as little as possible" by bedding seeds under a thin layer of soil, he explained.
He also takes care never to leave the fields bare. After the wheat harvest, for example, he plants beans and alfalfa, which improve the soil's fertility.
After a decade of working like this, the level of organic matter in his fields has risen from 1.5 percent to three percent. Some farmers using these methods — there are around 5,000 in France — have achieved levels approaching five percent, compared with just two percent in some intensive wheat-farming areas.
Substantial savings
The fields have changed in appearance — goodbye regular ploughed furrows, hello earthworm "cabins", tiny piles of earth formed by their excretions. Also gone is the regular washing away of soil in storms, as the rain is now able to filter down into the fields instead of over its surface thanks to the tiny tunnels dug by the worms.
Importantly, Denieul is now seeing the same returns as he did with more intensive methods after several years of lower yields while the land regenerated.
And he has seen substantial savings — sowing without ploughing means his tractor uses half as much fuel as before.
He also now uses far less chemical weedkiller and no synthetic fertilizer at all — manure from the pigs does the job, now that the soil is more fertile naturally thanks to the worms.
"The gamble's paid off — we are more competitive than a normal production system," he said.
Convinced that he needs to help change minds, Denieul will soon open his doors to fellow farmers.
"Nature doesn't hold grudges — if you change the way you work, things return to their natural order," he said.