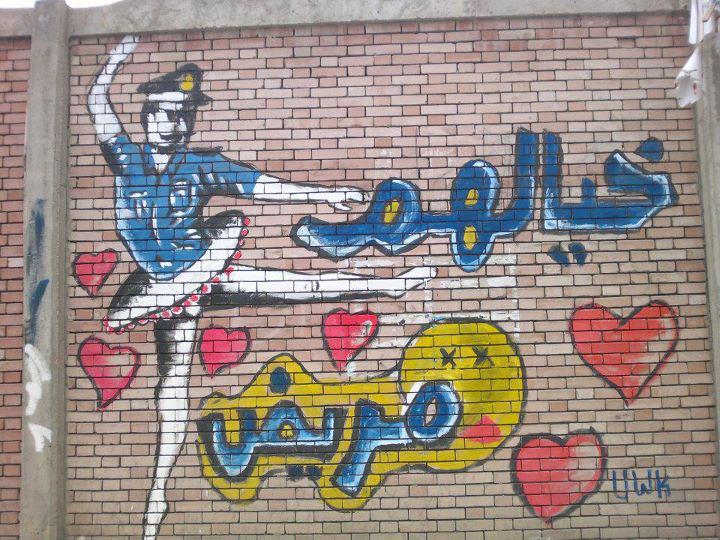 Since their formation in 2005, the Egyptian ultras have been called everything from “thugs” to “soccer hooligans.” They have been marked as “anarchists,” and, most recently, branded as “protectors of the 25 January revolution.” But these stereotypical attempts to label the ultras simply limit this enigmatic group of young men.

The ultras are a multi-faceted group which continues to experience a collective evolution from their pre-revolution days. They travel passionately through the realms of football fanaticism, activism, patriotism and collective consciousness.

And, if you have noticed the markings on the walls, it is apparent that their most recent transformation has come in the form of art, seen through their graffiti and a unique, self-created genre of Egyptian pop-music.

After spending several hours in and around Tahrir Square with Zamalek’s ultras, the White Knights, over the past year, it became apparent that there is far more to this group than meets the eye (or the ear, for that matter).

“Under the Mubarak regime, the media and government would always pin us with these negative labels; calling us ‘hooligans’ and ‘dangerous,’” explains Karim, a Cairo native and White Knights member who only agreed to be interviewed if his real identity was not revealed. “It’s disheartening because there is so much more to us than that — some of us are musicians, we are painters, and if you can believe it, some are even poets.”

I first met Karim last November in Tahrir Square, in the immediate aftermath of the Mohamed Mahmoud clashes, where scores of protesters had been killed and thousands injured during five days of street battles between government security forces and protesters.

The White Knights, among thousands of other demonstrators, had staged a sit-in a few meters south of Tahrir Square — their shoddy white tents marked with the universal ultras’ slogan “ACAB” — “All cops are bastards.”

Karim’s face was wrapped in a keffiyeh to conceal his identity. But, as we started talking, he swiped off the scarf with a sudden movement, exposed his wide smile and said, with his eyes pointing toward the Interior Ministry, “I can’t take myself seriously like this — please don’t take pictures of our faces or they will find us.

“You know, we’re not so bad,” he went on. “Sure there are a few bad eggs, but we are a massive group — we have certain rules of operation in order to maintain our order: we use fair judgment, we defend, not offend, and, like knights, we rescue without judgment.”

As night began to settle, it became increasingly apparent that Karim was a senior member of sorts — our conversation was repeatedly interrupted as younger White Knights approached him for instructions or to give him updates.

When I asked him if that was the case he replied, “There are no leaders among us — but there are organizational individuals who manage meetings and help guide the younger members. There is no hierarchy — organizers within the group are simply people with wisdom; as long as you have expertise in something, or a realistic idea, and, most importantly, a strong sense of humanity.”

At the end of our conversation, he jumped up from the low stonewall he was perched upon and said, “I want to show you all something — have you seen our graffiti?” A few steps away from their camp, the White Knights had covered the walls of the Mugamma building with their signature graffiti tags, and images of police brutality.

“I have big plans for our graffiti — as I told you, there are many artists among us. In fact, you should come with us sometime when we go to make graffiti, then you will get a true taste of the White Knights.”

A year of art

This past month, Karim and I sat down again, nearly one year after the Mohamed Mahmoud clashes. Since that time, Karim claims that “everything has changed, yet nothing has really changed — for us, the biggest challenge has been trying to stay united without our common ground of football.”

In February, 74 Ahly fans were killed during clashes that arose after a game in Port Said, which prompted a halt in the Egyptian Premier League’s football season over this past year. “You have to understand something, most of us are between the ages of 12 to 27 — we have been completely discarded by society and our government for our whole lives. The football stadium has been the only place we could really express ourselves and our frustrations. It’s the only place we’ve felt a sense of belonging,” he stresses.

Karim goes on to mention that without football and the protests, the White Knights had a massive void to fill in terms of identity and expression. Thus they began focusing on creative endeavors.

“While we have always done some mediocre graffiti promoting our team, in the past year we created a series of graffiti campaigns — if we can’t express in the stadium, then we will along the walls,” explains Karim.

Prior to the 25 January revolution, the White Knights’ graffiti, tags, and Arabic writing could mostly be found splattered on the walls outside their sporting club in Mohandiseen — but since then, they have expanded their work through Cairo and other governorates.

In the past year, the White Knights launched a series of socio-political graffiti campaigns addressing a range of topics, including clashes with the Supreme Council of the Armed Forces and a “Free Palestine” and “Free Syria” campaign.

“We have come to realize the strength of our organization, and while football and our beloved Zamalek team always comes first, in times without football we can still spread our identity or our opinions through art,” says Karim. “Expressing our collective identity and our group’s unity is really all we have.”

While much of the White Knights graffiti is still primitive with regard to the artistic techniques and aesthetic, there has been noticeable progress over the past year.

Karim explains that when their graffiti first began popping up around 2009, it was by individual members going out on their own to mark walls. But, since the suspension of football, Karim has taken a more hands-on approach, helping to organize efficient graffiti tactics to produce a more cohesive, White Knights output.

“We have a very democratic approach to everything we do. If someone has an idea for a graffiti campaign, we call a round-table meeting with a few of our artists and members to discuss and vote on it — everyone is free to submit ideas and everything is a collaboration,” he explains.

According to Karim, the White Knights graffiti initiatives are only the beginning of their foray into creative production. Earlier this year, the White Knights successfully released their first self-produced music CD featuring 11 tracks — the CD was distributed guerilla-style to nearly 30,000 Zamalek fans.

“It only made sense to start channeling energies into music — the approach is similar to the graffiti — it seems that we really do have a lot to say,” explains Karim as he blares one of the tracks titled “Shams El Horreya” (The Sun of Freedom).

The track opens with a violin, played in an oriental register reminiscent of most Arabic folk music — but, within moments, a three-count percussion beat kicks in, followed by chant-like vocals singing lyrics like: “Sing for freedom, it is the most beautiful song/The sun of freedom just gave birth, and it is impossible to kill/I’m a knight who lives for steadfastness and resistance.”

In other songs, like “If they ask me, let us choose,” the White Knights fuse together Latin beats and traditional oriental sounds giving the track a full and festive energy.

“We are very interested in Latin culture — they seem similar to us, in regard to their emphasis on family and football, plus their music is great and fits well with our sounds,” Karim says.

“But really, it would be our dream to do something with Mohamed Mounir or some of the shaabi DJs like Ortega or DJ Haha,” he adds.

The combination of poignant and patriotic lyrics, sung in chant-like unison by nearly 30 members, in addition to the stadium-style stomping heard in the percussion, is utterly fascinating. While there are still many musical kinks that need to be worked out, the White Knights may very well be on their way to establishing an entirely new genre of Egyptian-made music.

In the past year alone, the White Knights have created over 90 graffiti pieces throughout Egypt and a CD, and plan for an even greater outpouring of creative energy. And while their works cover a range of topics, one theme consistently reigns throughout: their utmost loyalty toward their country and their football club.