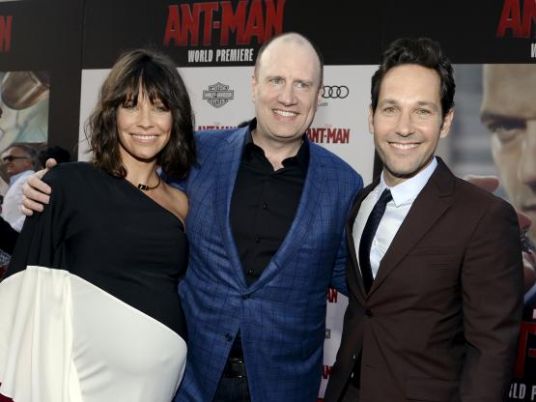 Adam Sandler's star appears to have dimmed significantly, after "Pixels," a slice of arcade game nostalgia that recruited the likes of Pac-Man and Donkey Kong to appear alongside the funnyman, opened to a disappointing US$24 million at the domestic box office.
The critically derided comedy finished up just behind Disney and Marvel's "Ant-Man," which picked up first place and $24.8 million in its second weekend. That marks the weakest chart-topping performance since April 24 when "Furious 7," then in its fourth week of release, bested all challengers with $17.8 million. So far, "Ant-Man" has earned $106.1 million stateside.
The weekend box office race unfolded in the shadow of a shocking act of violence after a gunman opened fire during a Thursday night screening of "Trainwreck" in Louisiana, killing two women and injuring nine people before turning the weapon on himself. Safety concerns across the country may have caused some consumers to steer clear of cinemas.
Among the weekend's other new releases, Fox's "Paper Towns" picked up $12.5 million from 3,031 locations, while The Weinstein Company's "Southpaw" snagged $16.5 million from 2,772 theaters. "Paper Towns" missed analysts' projections. Most estimates had the latest tween romance from "Fault in Our Stars" author John Green debuting to north of $20 million. With a production budget of $12 million, it still stands to be profitable, but the results seemed to puzzle the studio, which thought it had a hit on its hands.
"I'm really somewhat mystified," said Chris Aronson, domestic distribution chief at Fox. "It's something we're going to have to look at and review on a post-mortem basis and find out why we didn't get more people in."
"Southpaw," an uplifting boxing drama with Jake Gyllenhaal, did better than expected, potentially setting the $25 million drama up for a healthy run with those moviegoers who have grown weary of dinosaurs and costumed heroes. The picture attracted a diverse crowd that was 24% Latino, 21% African-American, and 60% under the age of 35. The film's star was front and center, doing interviews on everything from Fresh Air to Sports Center, while recounting the physical transformation he underwent to believably play a fighter.
"Jake was everywhere and people responded to him," said Erik Lomis, the Weinstein Company's distribution chief.
He predicted a long run, noting, "It appeals to the people on a mass level and it's a very satisfying film."
In the case of "Pixels," the Sony release cost $88 million to produce, a figure that is moderate by summer blockbuster standards, and the studio touted its overseas performance. The picture has made more than $25 million to date, Sony said. In the U.S., the opening weekend crowd was 62% under the age of 25 and 55% male.
It ranks as another disappointment for Sandler. Four years ago, he was perhaps the most consistent comedian in terms of box office performance, fielding hits like "I Now Pronounce You Chuck and Larry," "Grown Ups," and "Just Go With It." More recently, he has struggled mightily – headlining flops and duds like "Blended" and "That's My Boy." Only a sequel to "Grown Ups" and "Hotel Transylvania," an animated film that only featured his voice, have worked. He will now look to salvation in the form of a multi-picture deal with Netflix.
Holdovers, "Minions" and "Trainwreck," picked up $22.1 million and $17.3 million, pushing their totals to $261.6 million and $61.5 million, respectively. In milestone news, "Jurassic World" has now blown past "Marvel's The Avengers" on the domestic all-time list, becoming the third biggest film in history, when not adjusted for inflation, with $623.8 million. It earned $6.9 million.