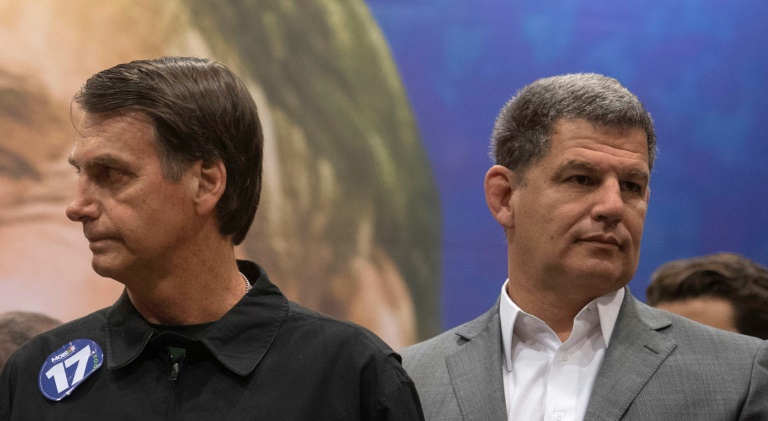 Brazilian President Jair Bolsonaro on Monday sacked a close aide who helped get him elected after a storm within his party over suspected improper campaign financing.

The allegations are the latest scandal to hit the party of the far-right president, who comfortably won elections last October in large part by vowing to stamp out corruption.

Bolsonaro “has decided to dismiss as of today Gustavo Bebianno as minister of the general secretariat of the presidency,” spokesman Otavio do Rego Barros told a news conference in Brazilia.

The spokesman did not explain the firing, saying it was a “personal decision” by Bolsonaro.

Bolsonaro did not clarify much further in a video he released later that was broadcast by Brazilian media.

He said only that “different points of view on relevant issues brought a need for a re-evaluation.”

The president recognized Bebianno had played a vital role in his election campaign. “His work was important to our success,” Barros said.

The sacking could impact legislative passage of an upcoming bill Bolsonaro is to present to Congress this week to reform Brazil’s unsustainable pension system. The reform is considered by investors to be the most crucial promise the president made to overhaul Latin America’s biggest economy.

Bebianno, who held cabinet rank and was former leader of the ultraconservative PSL, was replaced by a retired general, Floriano Peixoto, boosting to eight the number of military men running Bolsonaro’s 22 ministries.

As chief of the ruling PSL party, Bebianno had been a key figure in Bolsonaro’s campaign last year that led to the 63-year-old politician being elected in October polls. When Bolsonaro took office at the beginning of January he rewarded Bebianno with the ministerial post by his side in the presidential palace.

But that close alliance became broken after a newspaper, the Folha de Sao Paulo, reported that the PSL was thought to have nominated fake candidates in the general election to divert public funds to its coffers.

Bebianno had denied involvement and sought to downplay the crisis. He also said he had spoken several times with Bolsonaro while the president spent the first half of this month in hospital recovering from stomach surgery.

But one of Bolsonaro’s sons, Carlos Bolsonaro, who is a state legislator in Rio de Janeiro, said Bebianno was “lying” and no such discussions took place. He also said he had asked for a police investigation against Bebianno.

That triggered ructions in the PSL and among allies of the president, who questioned why Carlos — who has no position in the presidency or federal government — was permitted to act that way against Bebianno.

After several days of back-and-forth among top officials, Bolsonaro — who campaigned on pledges to clean up political corruption — acted Monday by firing Bebianno.

Bolsonaro’s reputation has been further sullied by suspicions of illegal financial transactions surrounding another of Bolsonaro’s sons, Flavio, who is a senator.

Bebianno’s dismissal, anticipated by investors, prompted a 1.04 percent fall in the stock market Monday, and a dip in the value of the Brazilian real.