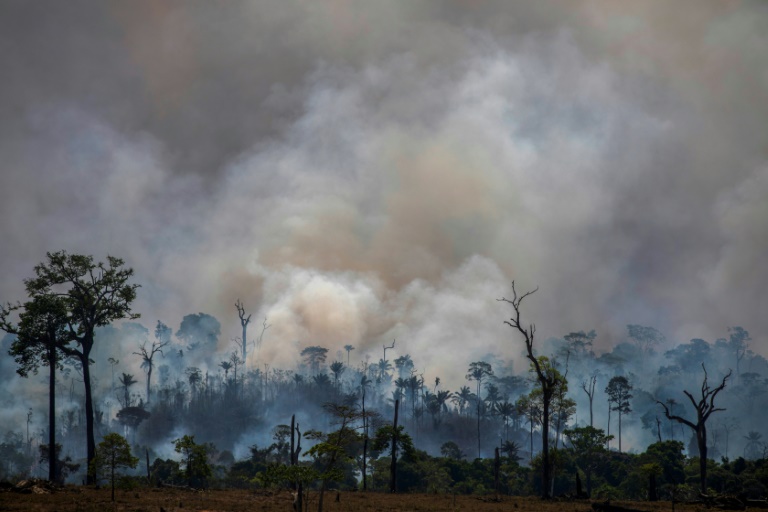 A 60-day ban on burning in Brazil took effect Thursday after a global outcry over fires raging in the Amazon and data showing hundreds of new blazes in the rainforest.

The decree issued by President Jair Bolsonaro comes after escalating international pressure over the worst fires in the Amazon in years, which have ignited a diplomatic spat between Brazil and Europe.

But activists quickly doused hopes that the ban would work.

“The people who burn without a license are not going to obey,” said Rodrigo Junqueira of the Socio-Environmental Institute.

Thousands of troops and firefighters have been deployed since the weekend to combat the fires, along with two C-130 Hercules and other aircraft that are dumping water over affected areas in the country’s north.

Police on Thursday arrested three people for burning more than 5,000 hectares (12,350 acres) in a conservation area in Para state.

More than 1,600 new fires were ignited between Tuesday and Wednesday, taking this year’s total to almost 85,000 — the highest number since 2010, official data shows. Around half of them are in the vast Amazon basin.

Bolsonaro however claimed in a live broadcast on Facebook that “this year’s fires are below the average of recent years.”

UN chief Antonio Guterres on Thursday mooted a meeting of key countries to drum up support to tackle the fires that have also devastated swaths of Bolivia.

“We are strongly appealing for the mobilization of resources and we have been in contact with countries to see whether, during the high-level session of the General Assembly, there could be a meeting devoted to the mobilization of support to the Amazon,” Guterres told reporters.

Brazil’s foreign ministry said it was not aware of the proposal.

It urged “foreign authorities” to learn more about the country’s environmental policies, the situation in the Amazon and measures taken to combat the fires “before proposing new initiatives.”

International offers of help for combating the fires is a hot-button issue in Brazil, with Bolsonaro and others insisting on the country’s sovereign rights over the Amazon.

Bolsonaro on Wednesday accused France and Germany of “buying” Brazil’s sovereignty after the G7 offered $20 million in Amazon fire aid.

Vice President Hamilton Mourao — widely considered a moderate voice in Bolsonaro’s government — also weighed in publicly for the first time on Wednesday, insisting in an opinion piece that “our Amazon will continue to be Brazilian.”

The governors of several states in the Amazon told Bolsonaro in a meeting on Tuesday that international help was needed.

Their plea came after Norway and Germany halted around $70 million in Amazon protection subsidies earlier this month.

The United States is ready to help Brazil fight forest fires in the Amazon, President Donald Trump said Wednesday, criticizing the G7 for failing to consult Bolsonaro over its initiative.

A water-bombing plane financed by G7 money has taken off from Paraguay to help fight fires in the Amazon, in coordination with Chile, the French president said Thursday.

Bolsonaro also renewed a demand Wednesday that French leader Emmanuel Macron withdraw “insults” against him, fueling a war of words between the two men that threatens to torpedo a huge trade deal between the European Union and South American countries, including Brazil.

In the escalating row, Macron has accused Bolsonaro of lying to him about Brazil’s climate change stance, while Bolsonaro has slammed Macron as having a colonialist mentality.

“I think Bolsonaro is causing enormous harm to the Brazilian people, a little out of evil and a little out of ignorance,” former president Luiz Inacio Lula da Silva told the BBC from jail where he is serving almost nine years for corruption.

Even as Bolsonaro’s decree was published, there were already doubts over how Brazil would enforce the two-month ban on burning in the remote region where deforestation has surged this year as agencies tasked with monitoring illegal activities were weakened.

“It will not be useful,” a skeptical fruit shop owner in Porto Velho, the capital of the northwestern state of Rondonia, told AFP.

Environmental group WWF said Brazil already had laws and tools to detect illegal deforestation and burning, but it lacked enforcement.

“The certainty of impunity is the great spark that starts the fires,” WWF said.

Experts say increased land clearing during the months-long dry season to make way for crops or grazing has aggravated the recurring problem of fires.

The defense ministry says the fires are under control and that the number of blazes is falling, helped by recent rain in the affected areas.

EMA: Egypt's climate will be impacted by the Amazon forest fires