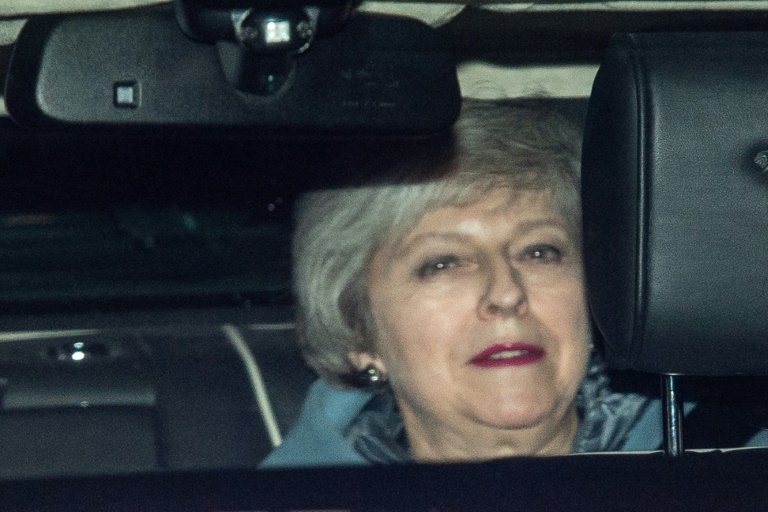 Prime Minister Theresa May heads back to Brussels on Wednesday to renew her quest to reopen the terms of Britain’s Brexit divorce, but appears headed for disappointment.

With less than six weeks until Brexit day, European Commission president Jean-Claude Juncker has agreed to meet May once again, but EU leaders insist they will not restart negotiations.

“I have great respect for Theresa May, for her courage and her assertiveness. We will have a friendly talk tomorrow but I don’t expect a breakthrough,” Juncker said Tuesday.

May and the other 27 EU leaders approved a Brexit withdrawal agreement at a summit on November 25 last year, but the British leader’s own parliament rejected it on January 15.

Since then, May and her ministers have repeatedly met EU leaders and their negotiator Michel Barnier to urge them to reopen the text to find a way to appease eurosceptic MPs.

May will try again on Wednesday, but on this trip she will not even meet Donald Tusk who, as president of the European Council, represents the leaders of EU member states.

She will instead meet Juncker and Barnier, who have no mandate from Tusk’s council or EU capitals to renegotiate the deal, or to modify the infamous “Irish backstop” clause.

This provides for Britain to remain in the EU customs union until a way is found — such as a future free trade deal — to ensure that Ireland’s border with Northern Ireland remains open.

Brexiteers in May’s own Conservative party see this as a “trap” to keep Britain in a form of union indefinitely, and have demanded a time limit or a unilateral exit clause.

This would be seen in Brussels as a betrayal of EU member Ireland, and it has consistently got short shrift from EU officials.

This represents a direct rejection of May’s core demand.

“The prime minister believes that she can secure changes in relation to the backstop MPs want — there is a majority in parliament for a deal”.

Without a deal, Britain is due to leave the Union abruptly after four decades on March 29, with no follow-on agreement or transition period to manage trade and economic relations.

Both sides have said they want to avoid this, and many experts foresee economic chaos, even warning of food and medicine shortages or a renewed threat of unrest in Northern Ireland.

Manufacturing supply chains could be disrupted, and Brexit uncertainty has already been cited as a contributing factor in the closure or departure of several British-based businesses.

Another option would be for Brussels to accord Britain an extension to the March 29 deadline, which is enshrined in British law.

But May’s government insists it will not request a delay, all 27 remaining members would have to agree and it would be legally difficult for Britain to remain in the EU for long.

Member states are obliged to hold polls May 23-26 to elect a new European Parliament, which will start sitting from July 2, presumably without any British members.

“Any decision to ask for more time lies with the UK. If such a request were to be made, no one in Europe would oppose it,” Juncker told the Stuttgarter Nachrichten this week.

“If you are asking for how long the withdrawal can be postponed, I have no timeframe in mind… But I find it hard to imagine that British voters would again vote in the European elections.”

May is due at the EU’s Berlaymont headquarters for her meeting with the Commission president at 6:30 pm (1730 GMT). The next day, British opposition Labour leader Jeremy Corbyn will meet Barnier.