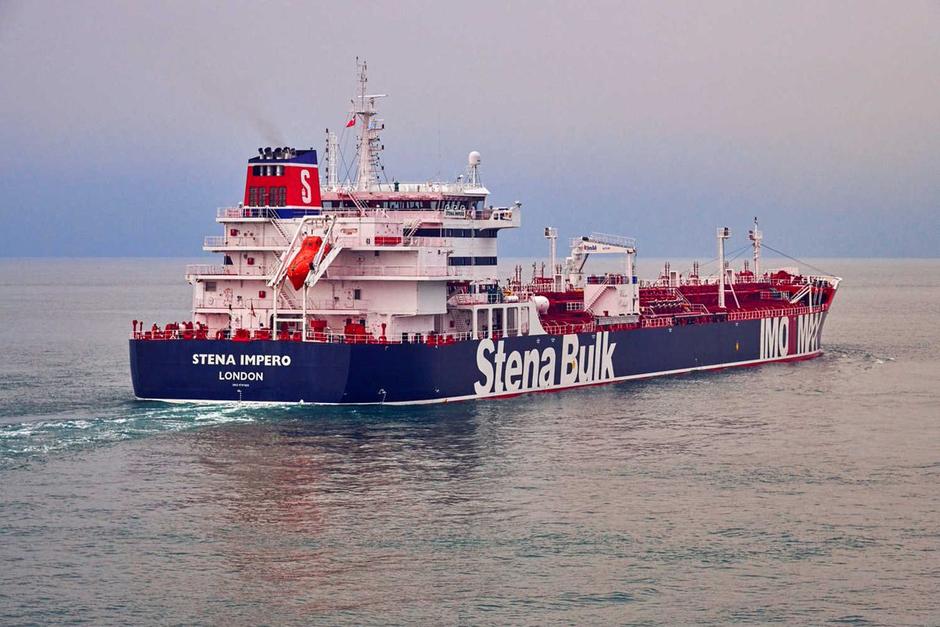 LONDON/DUBAI (Reuters) – Britain said Iran seized two oil tankers in the Gulf on Friday and told Tehran to return the vessels or face consequences in the latest confrontation to ratchet up tension along a vital international oil shipping route.

Iran’s Revolutionary Guards said they had captured the British-flagged Stena Impero, announcing the move two weeks after the British navy seized an Iranian tanker in Gibraltar.

Iran’s semi-official Tasnim news agency said the second vessel, the British-operated Mesdar, had not been seized. It said the ship had been allowed to continue its course after being given a warning over safety and environmental issues.

The Stena Impero and Mesdar changed direction sharply within 40 minutes of each other shortly after entering the Gulf through the Strait of Hormuz, taking up a course toward Iran, Refinitiv tracking data showed.

“These seizures are unacceptable. It is essential that freedom of navigation is maintained and that all ships can move safely and freely in the region,” British foreign minister Jeremy Hunt said.

Hunt later said, in comments reported by Sky News, that there would be consequences if Iran did not return control of the ships but said Britain was not considering military options.

US President Donald Trump said he would talk to Britain about the issue, speaking after a war of words earlier on Friday about whether the United States had shot down an Iranian drone in the Strait of Hormuz.

Already strained relations between Iran and the West have become increasingly fraught since the British navy seized Iran’s Grace 1 tanker in Gibraltar on July 4 on suspicion of smuggling oil to Syria in breach of European Union sanctions.

Oil prices LCOc1 gained on Friday after the latest spike in tensions along the Strait of Hormuz, through which a fifth of the world’s oil supplies pass.

Iran’s Guards, an elite force under the command of Supreme Leader Ayatollah Ali Khamenei, said they seized the Stena Impero at the request of Iranian authorities for “not following international maritime regulations,” state television reported.

Northern Marine Management, which is owned by Stena AB, confirmed the Stena Impero was heading toward Iran.

Norbulk, the manager of the tanker Mesdar, said the vessel had been boarded by armed personnel but was later allowed to continue its voyage. It said the crew were safe and well.

Iran had said it would retaliate against the seizure in Gibraltar. Just days later, three Iranian vessels tried to block a British-owned tanker passing through the Strait of Hormuz but they backed off when confronted by a British navy ship.

Refinitiv data showed the Stena Impero vessel is owned by Stena Bulk and indicated its destination had been the Saudi port of Jubail on the Gulf. The tracking map showed it veering off course about 1517 GMT and heading toward Iran.

The Mesdar made its shift toward Iran at about 1600 GMT.

“We received reports that the British Stena Impero oil tanker was causing incidents and, therefore, we asked the military to direct it to Bandar Abbas port for the necessary probes,” Allahmorad Afifipour, head of Hormozgan’s maritime authority, told Tasnim news agency.

Tasnim, which cited military sources as saying the Mesdar had not been seized, said the Stena Impero had been causing pollution by dumping oil residue.

An Iranian military source said the Stena Impero “had turned off its tracker and ignored several warnings by the Guards before being captured,” the official IRNA news agency reported.

State television said the Stena Impero was taken to a coastal area and turned over to the authorities to take the necessary legal steps, the television added.

Supreme Leader Khamenei said on Tuesday Iran would respond to Britain’s “piracy” over the seizure of the Iran’s Grace 1 tanker in Gibraltar.

Tehran has repeatedly called for the ship’s release, denies the allegation that the tanker was taking oil to Syria in violation of sanctions and says Gibraltar and Britain seized the vessel on the orders of Washington.

Tensions between the United States and Iran have been steadily rising since Washington withdrew last year from a global pact aimed at reining in Tehran’s nuclear program and imposed sanctions that seek to shutdown Iranian oil exports.

Iran has said it would not halt its oil exports, the government’s main source of revenue.

Behnam Ben Taleblu, an analyst at the Foundation for Defense of Democracies, said Tehran’s action suggested U.S. sanctions “are working and that negotiations with America or world powers will need to happen”.

Guy Platten, secretary general of the International Chamber of Shipping, called on all those involved in Friday’s shipping incident to seek a swift resolution to the incident that threatened the safety of seafarers.

“Freedom of navigation is vital for global trade and we encourage all nations to uphold this fundamental principle of maritime law,” he said.

Reporting by Kate Holton and Jonathan Saul in London and Reuters staff in Dubai; Writing by Edmund Blair; Editing by Frances Kerry

UK says Iran tanker will be freed after guarantees on destination