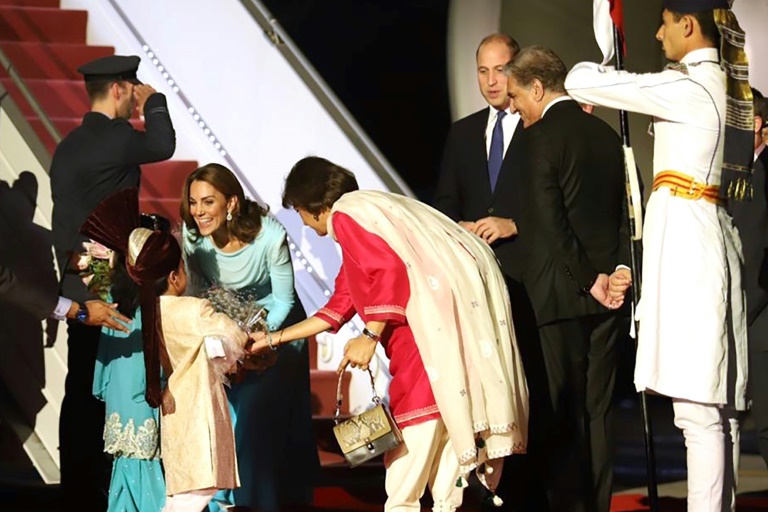 Prince William and his wife Kate arrived in Pakistan to a red carpet welcome late Monday for their “most complex” tour to date, with Islamabad eager to tout improved security after years of violent militancy.

The couple — the Duchess of Cambridge in a sea-green shalwar kameez, and the Duke in a dark suit — were greeted by Foreign Minister Shah Mehmood Qureshi and presented with flowers after they landed in a British government plane at a military base in Rawalpindi, the garrison city adjacent to the capital Islamabad, state television images showed.

Details of the five-day visit are being kept under wraps. Security is expected to be tight for the couple’s first official trip to Pakistan, and the first visit by a British royal since William’s father Charles and his wife Camilla came in 2006.

In addition to Islamabad they are set to visit the ancient Mughal capital of Lahore, as well as the mountainous north and the region near the border with Afghanistan in the west.

Kensington Palace has called the trip “the most complex tour undertaken by The Duke and Duchess to date, given the logistical and security considerations”.

The couple are also expected to meet Prime Minister Imran Khan, who was close friends with William’s mother, the late Princess Diana.

“I’ve always been struck by the warmth in Pakistan towards the Royal Family,” British High Commissioner Thomas Drew said in a video published to Twitter late Sunday.

The couple’s programme will pay respect to Britain’s historic relationship with Pakistan, once part of colonial India, he said.

“But it will focus largely on showcasing Pakistan as it is today, a dynamic, aspirational, and forward-looking nation,” Drew continued.

They are expected to see Pakistan’s efforts to combat climate change and learn about the “complex security” of the region, among other issues, a statement from Kensington Palace said earlier this month.

Pakistan has waged a long battle with militancy which has seen tens of thousands of people killed in the past 15 or so years.

Charles’ and Camilla’s 2006 trip was tainted when they were forced to pull out of a visit to Peshawar over safety concerns after the military launched an airstrike on a religious school that killed 80 people.

But security has improved dramatically since the army intensified a crackdown on militant groups in 2015, with several countries changing their travel warnings for Pakistan as a result, and Islamabad eager to promote both tourism and foreign investment.

There are promising signs, such as the British Airways return earlier this year after more than a decade, and the slow but steady revival of international cricket.

Analysts have long warned that Pakistan is not yet getting to the root causes of extremism, however, and militants retain the ability to carry out attacks, including in urban areas.

Moments before the couple’s arrival Monday, Qureshi used televised comments to invoke the memory of Diana, who charmed Pakistanis when she visited in her official capacity in 1991.

She also made several private visits in later years to help Khan — then a cricketer-turned-opposition politician married to her friend Jemima — raise money for a cancer hospital in Lahore.

“She is held in very high esteem in Pakistan… We are happy that the Duke and Duchess of Cambridge are now coming,” Qureshi said.

The visit showed that Pakistan has come out of “difficult times”, he added.

Pakistan was carved out of colonial India to become independent from Britain in 1947, creating an Islamic Republic for the subcontinent’s Muslims.

Britain is home to more than a million people of Pakistani origin, making it the largest Pakistani diaspora community in Europe.

'We won't give an inch': India faces defiance in 'Kashmir's Gaza'