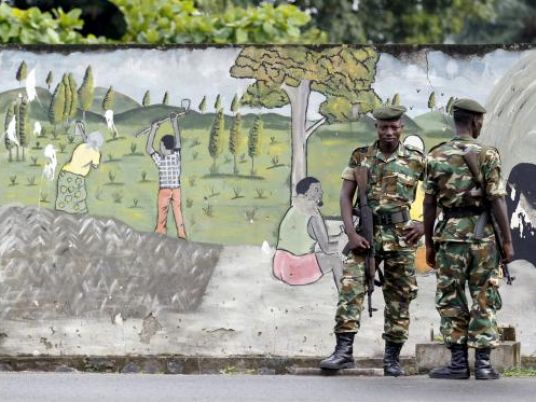 Burundi protest organizers on Saturday called for a two-day halt to demonstrations against President Pierre Nkurunziza's move to seek a third term, which they says violates the constitution and endangers the peace deal that ended a civil war in 2005.
There have been six straight days of protests in the capital Bujumbura, marking the biggest political crisis in the small, landlocked nation in the heart of Africa since the ethnically fuelled civil war came to an end.
But the demonstrations which started on Sunday have lost momentum in the last few days, with the number of people taking to the streets dwindling. The presidency has called the protests an "insurrection".
Clashes between demonstrators and police have also eased. The protests have focussed on a handful of suburbs in the capital, and have not spread to the provincial towns and the countryside, where Nkurunziza has most of his supporters.
Civil rights groups say at least six people have been killed during the protests and dozens injured.
"We decided to stop demonstrations for two days, first to allow those who lost their family members in the protests to observe mourning and, second, we want the protesters to regain energy before resuming the fight Monday," said Pacifique Nininahazwe, head of Focode, one of the 300 civil society groups that have called for the demonstrations.
Police said two officers and a civilian were killed late on Friday in two separate grenade attacks in the capital Bujumbura. More than 10 others were wounded.
Nkurunziza has urged the protesters to stay off the streets.
On Friday he said those found guilty of involvement in the demonstrations would face "severe sanctions".
Opponents say that Nkurunziza, by seeking a third five-year mandate at elections on June 26, is violating the constitution and the Arusha peace accords that eventually ended Burundi's 12-year civil war.
Pre-vote fears have driven more than 26,000 Burundians to neighboring Congo and Rwanda, officials say.
The United Nations, which has voiced concerns that intelligence and security services are using live ammunition at protests, said there are "credible" reports of detained protesters being beaten and held in overcrowded conditions.
Nkurunziza's supporters say he can run again because his first term, when he was picked by lawmakers and not elected, does not count. The United States disagrees and has said his candidacy is a violation of the Arusha accords.
The crisis is being closely watched in a region still scarred by the 1994 genocide that killed more than 800,000 people in neighboring Rwanda which, like Burundi, is divided between ethnic Tutsis and Hutus.
Diplomats say the unrest is a political disagreement but fear violence could lead to bloodshed along ethnic lines.