Upon my experience I advocate strongly C-section 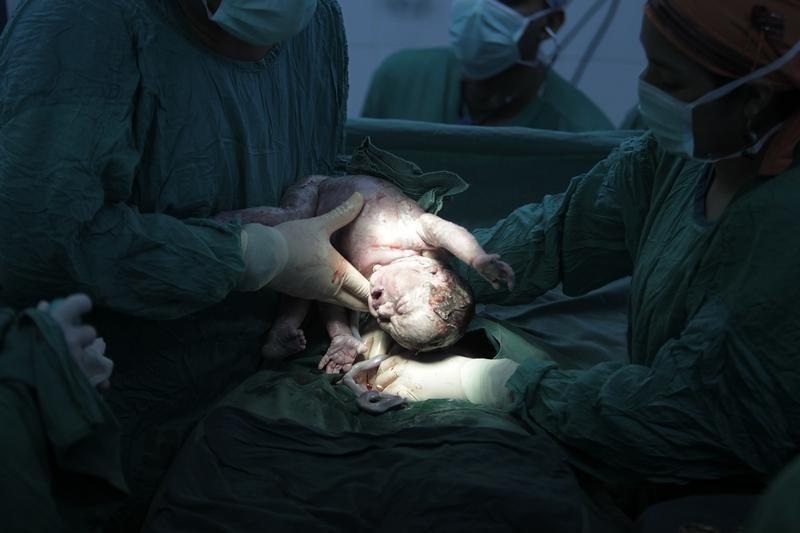 A screaming lady trying to catch her intermittent breathe, a terrified husband holding her hand, a crying mother patting her back, tears falling from people’s eyes all around, and the sound of a baby’s heartbeats could be heard amid doctor’s observations; this is a natural delivery scene that many of us have become accustomed to through television or even experienced in real life. However, it can become a nightmare for Egyptian women, making them resort to a C-section (cesarean) to avoid any such experiences.

Despite C-sections being four-times more dangerous than regular deliveries, the study, which was released by the United Nations Population Fund (UNFPA), revealed an increase in the number of cesarean deliveries since 2005 in Egypt, with the most significant increase taking place between 2008 and 2014, remarkably doubling from 26.7 percent to 51.8 percent.

Debate was sparked in the discussion about the reasons behind those startling indices of C-section rates in Egypt. Some studies attributed the increase to be associated with a shift towards delivery in private health-care facilities.

While other studies denied this point, a 2008 survey by the Demographic and Health Survey (DHS) found that nearly one-third of births in public hospitals were delivered by a C-section.

Other researchers attributed the rise to the obstetrician’s greed, as the average cost of a cesarean delivery in Egypt is worth LE1,076, while a natural delivery costs only LE664.

On a separate note, some obstetricians say that a mother’s preference is the biggest reason, especially when mothers are potentially at a low risk for C-section delivery. Others assumed that the lack of medical protocols and required devices for natural labor at hospitals, especially public ones, are the main cause of the increase.

Surprisingly, a study released by the National Institute of Health found that this sizable rise in the proportion of C-sections in the private sector was driven by increasing C-sections among mothers who are theoretically and empirically known to not be at risk of C-sections, including mothers aged between 25–29 years, mothers of a normal body mass index (BMI), and mothers with babies of a normal birth weight, or singleton babies.

Egypt Independent interviewed a number of new mothers and pregnant ladies who had undergone C-section. Most of the answers revealed that their interest in C-section surgery stems from wanting to avoid the pain of labor contraction and keep themselves and their babies safe from some potential risks of natural birth. Only a few mothers voiced regret about their experience.

Having four C-sections increases chances of death during C-sections more than natural vaginal births – a fact some physicians might not recognize, Sameh Sadek, director of the Alexandria Regional Medical Center, told Middle East Eye. Sadek described the increase of C-section surgeries in Egypt as an “endemic problem.”

Nada Akram, a new mother, narrated her C-section experience. “I remember feeling shaky and cold due to anaesthesia. I can recall the incision’s pain very well, it was unbearable, and the worst moment was when the nurse asked me to get up and walk around, suddenly I felt if time stopped for few seconds. The pain was excruciating, I was not able to move my legs.”

Akram said that giving birth through C-section was her obstetrician’s choice. She kept saying that she would prefer to go though natural delivery but her physician refused, due to medical reasons.

“Actually I did not feel my case needed a cesarean, but he insisted,” she said.

Akram voiced her discontent with the experience, saying that if she could turn back time she would stand by her own choice or even change the doctor.

Meanwhile, Nada Mohammed, a journalist who gave birth through C-section 8 months ago, said that she was not convinced enough by the doctor’s decision. “Actually until this moment I don’t know the actual reason,” she said.

Nada’s experience started when her gynaecologist assured her she would give birth naturally, but in her 36th week he said that there is no amniotic fluid around the fetus, and she must deliver as soon as possible through C-section, because the cervix has not opened yet, and if she waited it will endanger the baby. So, she agreed.

“After my delivery, I’ve read several experiences similar to mine, [about women] who gave birth naturally. I don’t have the medical background so I can’t judge the doctor’s intentions, but I can acknowledge that there were some medical complications. But 90% of the doctor’s decision is based on money,” she said.

On the other hand, there were supporters to the C-section from mothers to be.

“I gave birth to my first baby girl through a C-section, and if I will give birth to six babies I will strongly go for C-section. I decided earlier and I genuinely loved the experience, the operation was done under spinal anaesthesia, which was much better to avoid general anaesthesia complications,” Dina Zakaria, a marketing employee, said.

Doctors believe that women whose first labor was cesarean, will most likely give birth to their next babies through C-section. The UNFPA study found that both hospitals and gynaecologists confirmed that 26 percent of women who had undergone C-section to give birth to their first child will be subjected to the same operation in future labor. Meanwhile, 29 percent of doctors believe that the second delivery after a C-section will depend on the individual women’s situation, and 36 percent of them said they will most likely go through a cesarean, while only 7 percent said they would rather give birth naturally, but under observation.

“I think C-section is much better because natural delivery ends up with some complications: for instance, after going through the painful labor contractions for many hours, most doctors will decide to go with a C-section, so you’ll experience both pains,” said Zakaria.

Zakaria believed that doctors have recently resorted to C-section to avoid complications, especially as many pregnant women experience some medical complications during their pregnancies, like an under-weighted fetus, placenta abnormalities, and premature births.

“Upon my experience, I advocate strongly C-section as I went through a very painful and tiring natural delivery, I stayed more than 12 hours experiencing labor contractions, my cervix did not open so I told my doctor to go through a C-section,” Yasmin Zaki, a pregnant lady and a mother of a toddler said.

Zaki believes that physicians now prefer C-section surgeries to avoid any risks that may happen to the mother or the fetus.

However, Walaa Mahmoud a translator and a mother of two children who were born through a C-section, said that her obstetrician advised her to go through natural childbirth, which she refused to go through to avoid medical risks including, oxygen deprivation and uterine rupture.

“Despite being under the umbrella of surgical operations, it’s now much easier, and the pain after it is bearable and lasts for only one week,” she said.

“Doctors who performed C-sections reported that 10 percent of these cases could have been delivered normally,” the UNFPA study says.

Abu Bakr al-Nashar, an obstetrician, told Youm7 that the United Nations (UN) stated that this increase will have no positive effect on maternal or general fetal health in the future future, adding that C-section rates in reality could exceed 70 to 80 percent.

Khaled Amin, a gynecologist, told Egypt independent that there are several reasons behind this surge, including lack of medical protocols that necessitate imposing law to safeguard the physicians from legal issues. “Most gynecologists are afraid of legal accountability in case the mother or the baby dies during labor, because if this happens, the doctor will be subjected to a penal code, irregardless of whether this was out of the doctor’s hands,” he said.

Amin shed light on another reason, that the lack of medical supplies needed for natural delivery, such as the vacuum and cardiotocography (CTG) devices, are not available in most hospitals, especially governmental ones.

“C-section deliveries are on the peak also due to some gynaecologists’ greed, as it costs more money and saves time and effort,” he said.

However, Amin also pointed that the mother’s decision plays a pivotal role in the increasing number of C-sections, and if their body is properly induced to natural birth. He explained that there is no awareness of the complications of cesareans, which is considered a surgery, and pregnant women are highly subjected to blood clotting during labor.

The UNFPA found that women who give birth through a C-section may have not received complete information to enable them to make the right decision about the method of delivery. 67 percent of women were told of the causes of undergoing a cesarean delivery: 14 percent were informed of positive information, while only 6 percent knew the negatives of the cesarean operation.

“Moreover, based on false old-stereotypes of a woman who screams during labor due to painful contractions that may take many hours, pregnant women prefer to deliver easily with no pain and in a very short time,” said Amin. “They rather prefer to take the anaesthetic, sleep for a while, wake up and find their baby beside them regardless any surgical pain afterwards,” he said.

Amin strongly advocated for natural delivery, saying that it is much healthier, and that despite the pain, the mother feels only during labor – after delivering the baby, she will not feel pain.

“We solely take the decision of C-sections in urgent cases due to health issues like high blood-pressure or diabetic pregnant mothers,” he said.

Amin urged the government to exert an effort to minimize the increasing number of C-section deliveries in Egypt by raising awareness among pregnant women, and to supply some facilities to encourage – especially underprivileged women – to pursue natural births. This will doubtlessly save huge costs that have been borne by the country for years, he believed. In 2014, the excessive use of cesarean deliveries cost the health sector in Egypt over LE900 million.

“For instance,” continued Amin, “they could promise low-income women who deliver naturally that they will provide them with subsidized formula milk,” he said.

“If we compared women today to those in the past, we will find a dramatic change in lifestyle. For instance, women in the past were eating healthy food, walking a lot, so their muscles were elastic and good for natural delivery. Moreover, their body absorbed more vitamin D. But now women exercise less, eat huge amounts of fast-food and don’t move,” he said.

Abassy said that pregnant women should be physically and psychologically prepared for natural delivery, but now mothers-to-be choose not to go through this experience in order to minimize the risk, they prefer the C-section to avoid delivery pain.

“However, now there is no pain during natural delivery, thanks to epidural – which is a regional anaesthesia that blocks pain in the lower part of the body and leads to total lack of feeling,” he said.

He also said that some women avoid natural delivery due to their fear that it could weigh on sexual intercourse.

“Moreover, some ladies and their husbands choose a Cesarean to set the delivery date and to avoid any surprising timings,” Abassy said.

On another point, Abassy claimed that some gynaecologist avoid natural delivery in order to gain more profits and avoid any risks. He shed light on major reasons which doctors decide to go for C-sections, including when the woman has a high blood pressure, in the cases of diabetic pregnant mothers, adherent placenta, some cases of twins, pelvic abnormalities, low-lying placenta, and fetal macrosomia cases in which a newborn is significantly larger than average.

Pregnant doctor scrafices her baby while delivering a patient's

CNN: The world's most dangerous place to be pregnant