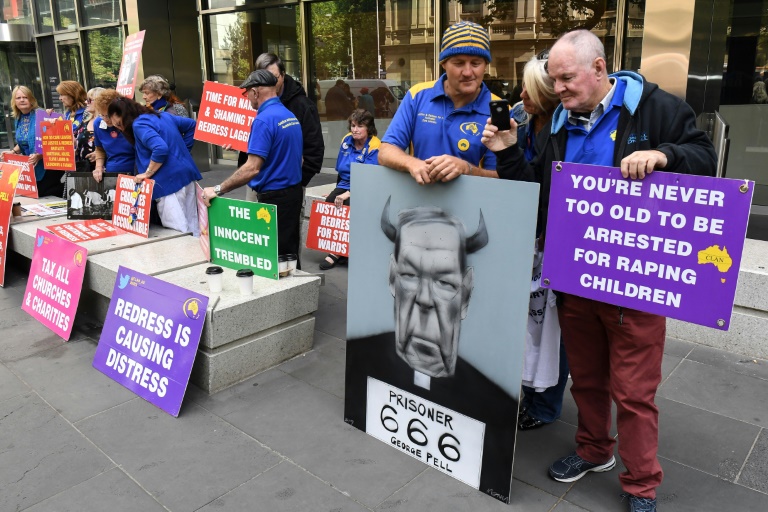 The former choirboy molested by Australian Cardinal George Pell led the response to his sentencing Wednesday, saying it was “hard to take comfort” from his six-year jail term.

Pell was sentenced in the County Court of Victoria after being found guilty of five counts of sexual and indecent assault in the sacristy of a Melbourne cathedral in 1996 and 1997.

Chief Justice Peter Kidd told the court the 77-year-old would be eligible for parole after serving a minimum term of three years and eight months. Pell had faced a possible maximum sentence of 50 years.

“It is hard for me to allow myself to feel the gravity of this moment,” the victim, who has not been identified, said through his lawyer, Vivian Waller.

“I appreciate that the court has acknowledged what was inflicted upon me as a child. However, there is no rest for me. Everything is overshadowed by the forthcoming appeal.”

Pell, the most senior Catholic cleric ever found guilty of child sex crimes, has already lodged his leave to appeal against the guilty verdict, with the hearings scheduled to be heard on June 5-6.

The father of the other victim, who died of a drug overdose in 2014, said through his lawyer that Pell’s sentence was “disappointing”.

“Our client is disappointed with the short sentencing and has expressed sadness over what he believes is inadequate for the crime,” Lisa Flynn said in a statement.

“I admire the courage of my client to keep fighting on behalf of his deceased son. To him, this battle is not over.”

‘He should wear a cape’

Cathy Kezelman, the president of child abuse victims support group Blue Knot Foundation, said while the sentence was “significant”, it is not as much as they hoped for.

“We must remember that victims are sentenced for life. He was not,” she said.

Outside the court, the emotion the case has generated was on full view, with victim advocates treating the sentencing as a watershed moment.

Rosemary O’Grady, who observed the proceedings day-in-day-out, said that while victims often take a long time to come forward, when they do, they want to be heard.

Julie Cameron, an advocate for victims of child sexual abuse, welcomed the verdict and was overcome with emotion. “I was looking for truth, and for justice,” she said.

“Our Judge Peter Kidd gave an amazing exploration of how he came to give the sentence today. He is such a fair human … I thought it was a balanced, fair judgement.”

“He should wear a cape,” she said, while admitting that she had been “terrified” Pell would avoid prison time.

An older man, who called himself only Michael, broke down outside the chambers.

“I cried out of heartbreak for the destruction that’s done to us,” he said, describing the verdict as “distressing” and “painful”.

“It brought up some tears. It was very very bittersweet at the end that he got such a lenient sentence.”