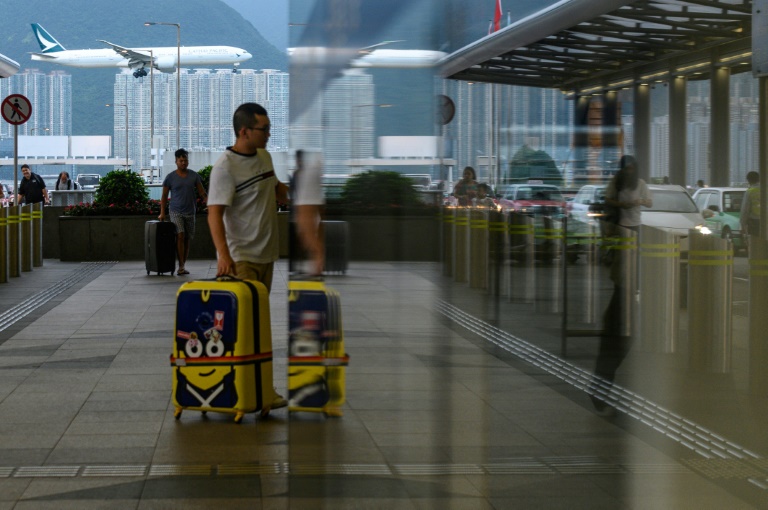 China reacted furiously Wednesday to “terrorist-like” attacks on its citizens by pro-democracy protesters during a second day of mass disruptions at Hong Kong’s airport that turned violent.

The rallies, which had paralyzed one of the world’s busiest travel hubs, ended with ugly clashes on Tuesday night that included protesters beating two men.

The Chinese government immediately seized on the attacks to louden its drumbeat of anger and intimidation against the protesters, who have staged 10 weeks of relentless rallies to demand greater freedoms.

“We express the strongest condemnation of these terrorist-like actions,” said Xu Luying, spokeswoman at the Hong Kong and Macao Affairs of the State Council, who called the two men who were beaten “mainland China compatriots.”

It was the second time this week that China had sought to frame the protests as “terrorism”, part of a pattern of increasingly ominous warnings that have raised fears it may deploy force to quell the unrest.

China on Monday said there were signs of “terrorism emerging”, as state media published a video of armored personnel carriers driving towards the border with Hong Kong.

US President Donald Trump added to fears Beijing may stage a military intervention to end the unrest, saying on Tuesday his intelligence had confirmed Chinese troop movements toward the Hong Kong border.

The people power movement, which has seen millions take to Hong Kong’s streets, was sparked by opposition to a planned law that would have allowed extraditions to mainland China.

It quickly evolved into a much broader campaign for democratic freedoms.

Under a 1997 deal that saw Hong Kong return to China from British colonial rule, the city is meant to have far greater liberties than those allowed on the mainland.

The protesters, who are demanding that China’s rulers stop interfering in the city, have enjoyed widespread support throughout most sectors of Hong Kong’s society.

But the beating of the two men at the airport on Tuesday, as well as the blocking of passengers from boarding flights, could backfire in terms of maintaining support.

The movement has no public leaders, with protests organized anonymously over social media and chat apps.

One group, which has organized anonymous press conferences featuring protesters, sought Tuesday to address the concerns that the rallies at the airport had gone too far.

“After months of prolonged resistance, we are frightened, angry and exhausted. Some of us have become easily agitated and over-reacted last night,” the group said in a statement.

“For this we feel pained and dispirited and would like to express our most sincere apologies.”

Demonstrators turned on the two men, fueled by suspicions within their ranks about undercover police or spies.

The first man was held for about two hours and assaulted before eventually being led away in an ambulance.

Riot police briefly deployed pepper spray and batons to beat back protesters while they escorted the vehicle away from the departures hall.

Another man, wearing a yellow journalist vest, was surrounded, zip-tied and then beaten by a small group who accused him of being a spy.

In a tweet, Hu Xijun, the editor of China’s state-controlled Global Times tabloid — which has vociferously condemned the protests — said the man was a journalist for the paper.

In another ugly scene, a group of protesters ganged up on a policeman and beat him. They stopped their attack when the policeman pulled his gun and pointed it at them, but did not fire.

On Wednesday there were only a handful of protesters at the airport and many flights were operating as scheduled.

As Hong Kong’s flag carrier Cathay Pacific comes under huge pressure from Beijing to clamp down on staff supportive of anti-government rallies, the airline said Wednesday it had sacked two pilots.

“One is currently involved in legal proceedings. The other misused company information on Flight CX216/12 August,” the airline said.

The airline said last week it had suspended a pilot accused of rioting after allegedly participating in protests.

It also said it had fired two ground staff, without specifying why, although local media reported that they were accused of leaking travel details of a Hong Kong police football team.

On Tuesday morning, the city’s leader, Carrie Lam, gave an at-times emotional press conference in which she warned of dangerous consequences if escalating violence was not curbed and said the hub was being “pushed into an abyss.”

But she once again refused to make any concessions to the protesters.

'When will you die?' Hong Kong leader grilled at press conference