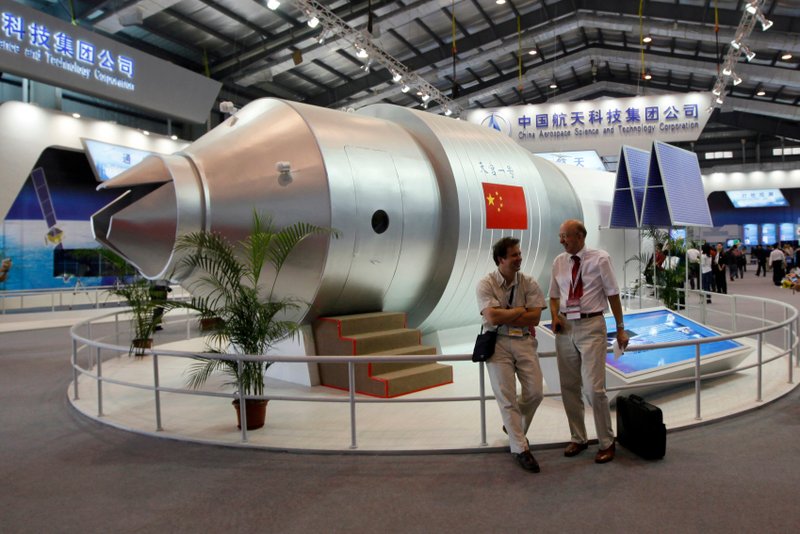 Scientists monitoring the craft’s disintegrating orbit had forecast the craft would mostly burn up and would pose only the slightest of risks to people. Analysis from the Beijing Aerospace Control Center showed it had mostly burned up.

Brad Tucker, an astrophysicist at Australian National University, said that Tiangong 1′s re-entry was “mostly successful” and that it would have been better if the space station had not been spinning toward Earth.

“It could have been better, obviously, if it wasn’t tumbling, but it landed in the Southern Pacific Ocean, and that’s kind of where you hope it would land,” Tucker said.

“It’s been tumbling and spinning for a while, which means that when it really starts to come down it’s less predictable about what happens to it,” Tucker said. He likened it to an airplane landing, saying it’s more difficult to predict where a plane that is “shaking around and moving” will land than one that is smoothly descending.

Launched in 2011, Tiangong 1 was China’s first space station, serving as an experimental platform for bigger projects, such as the Tiangong 2 launched in September 2016 and a future permanent Chinese space station.

Two crews of Chinese astronauts lived on the station while testing docking procedures and other operations. Its last crew departed in 2013 and contact with it was cut in 2016.

Since then, it has orbited gradually closer and closer to Earth on its own while being monitored.

Earlier forecasts had said that only about 10 percent of the bus-sized, 8.5-ton spacecraft would likely survive re-entry, mainly its heavier components such as its engines.

“The biggest takeaway from this is that as we put more things into space, all countries, we have to be aware that we do have to plan for these sorts of issues that are happening,” Tucker said.

Roger Thompson, senior engineering specialist with the Aerospace Corporation in Virginia, said modeling of Tiangong 1′s re-entry by monitors in the US had been highly accurate, leaving him feeling “great” about their predictions.

“We believe it was an uncontrolled entry,” Thompson said, adding that the corporation’s own estimate had been just 15 minutes behind the time announced by China.

The lack of control was not unusual given that about 15 percent of satellites re-enter the atmosphere prior to the end of their useful lives, he said.

The corporation, which provides technical support for the space industry, had not been in touch with the Chinese side about the re-entry, Thompson said.

China’s foreign and defense ministries said the country had relayed information about Tiangong 1′s return to Earth to the United Nations’ space agency and others.

Debris from satellites, space launches and the International Space Station enters the atmosphere every few months, but only one person is known to have been hit by any of it: American woman Lottie Williams, who was struck but not injured by a falling piece of a US Delta II rocket while exercising in an Oklahoma park in 1997.

Most famously, America’s 77-ton Skylab crashed through the atmosphere in 1979, spreading pieces of wreckage near the southwest Australian city of Perth, which fined the US $400 for littering.

Tiangong 1, whose name translates as “Heavenly Palace,” had two modules, one for its solar panels and engines, and one for a pair of astronauts to live in and conduct experiments. A third astronaut slept in the Shenzhou spaceships that docked with the station, which also contained facilities for personal hygiene and food preparation.

China’s space program has made rapid progress since it launched its first crewed mission in 2003 — becoming only the third country after Russia and the US to do so — including placing a rover on Mars and conducting a spacewalk.

A mission to land another rover on Mars and bring back samples is set to launch in 2020, while China also plans to become the first country to soft-land a probe on the far side of the moon.

The program’s military background has at times been a barrier to greater cooperation with those run by other countries, and it was excluded from the 420-ton International Space Station that is now beginning to wind down.