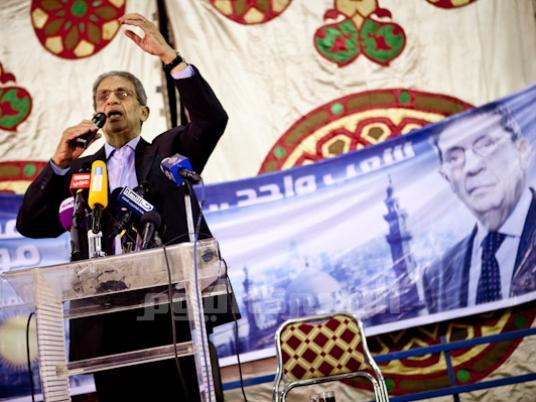 As political parties scurry to establish themselves before the parliamentary elections, expected to take place after the constitution is approved, 10 parties have decided to merge and form a single political party, the Conference Party.

Around 15 other political parties initially agreed on the idea of an alliance, adding that they would further discuss the proposal of a "full merger" under one party with their executive bureaus before making a final decision, according to the head of the Egyptian Arab Socialist Party Adel al-Qulla and other political leaders.

"This conference is the beginning of a coordinating between political powers based on civil principles, not Islamic [ones], in a bid to reach a full merge," Osama Ghazali Harb, head of the Democratic Front Party, told Egypt Independent following a press conference held by the 25 parties on Monday night.

Omar Semeida, head of the Egyptian Arab Union Party, explained that the parties that wanted to maintain an independent identity and rejected the idea of a full merger would join an alliance called "the Egyptian Nation Alliance," which includes a number of public figures, in addition to the Conference Party and other political parties.

Ayman Nour of the Ghad Party will be the party's spokesperson, while former presidential candidate Amr Moussa would be a leader in the party, and "possibly" the head of the party, according to Nour.

Islamist parties such as the Muslim Brotherhood's political arm, the Freedom and Justice Party, and the Salafi Nour Party were absent from the alliance. Confusion and conflicting statements marred political leaders in the alliance, who seemed to lack a clear vision of their newfound unity.

"Islamist parties can join our alliance as long as they abide by our civil principles and guidelines," Qulla said.

Nour called on Mohamed ElBaradei and his Constitution Party to join the alliance, and invited all those who supported the alliance's founding principles as set out by Moussa during the conference to join.

The principles, set out by Amr Moussa during the conference, were extremely broad.

They includes a commitment to democracy based on complete equality between citizens, guaranteeing the independence of state institutions from any political power, writing a constitution that guarantees freedom, dignity and justice for all citizens, and establishing a strong Egyptian economy based on fair competition and protecting consumer rights.

“We are still at the beginning and we haven't agreed on the bylaws and specific ideologies of the party and alliance yet,” Semeida said.

Political leaders in the conference denied that their different ideologies and the lack of a specific program or vision would stand in the way of their unity.

"If we can agree on 75 percent of our ideologies and principles, that's enough to create a strong party and competitor on the political scene," said Mohamed Adel-Azim, secretary general of the Democratic Front Party.

Ever since the 25 January revolution, which was followed by a surge of new political parties, announcements have been made of “coalitions” and “alliances” between political powers in a bid to set their differences aside.

However, as the first parliamentary elections to follow the revolution approached in November of last year, differences between these parties snowballed as each party fought to compete for the largest number of seats and guarantee the biggest slice of the electoral cake.

Nour, however, stressed that this alliance was different from any previous “typical alliance,” He said it was a “full merger” that “goes beyond parliamentary elections.”

Liberal and leftist parties were accused of being scattered and weak, leaving the political scene open for Islamists who dominated the polls in the last parliamentary elections.

“If we leave the political scene for the Islamists, they will dominate the polls again while we stand on the sidelines,” Qulla said.

However, other coalition partners have different priorities.

"It's not about confrontation with the Brotherhood; it's about creating a democratic Egypt based on the diversity of political powers and creating a strong competition which isn't dominated by one political party," Harb said.

Amr Hashem Rabei, a political analyst at the Ahram Centre for Political and Strategic Studies believed that the merger has the potential to create a strong opposition to the Brotherhood under certain conditions.

“These parties need to be organized and have a unified political program and speech … they have to be able to set their personal interests and aspirations aside and speak as one," he said.