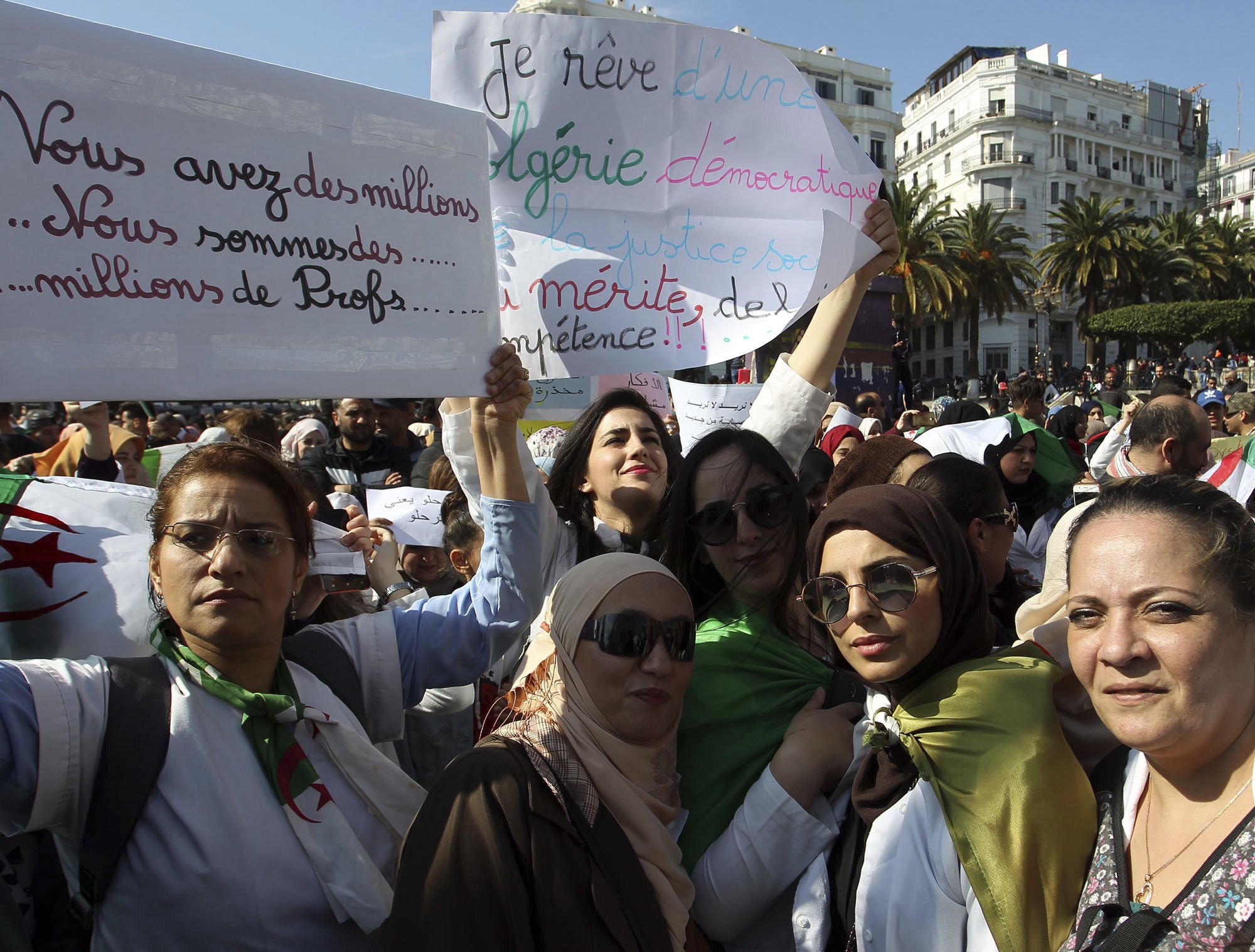 The opposition accuses the 82-year-old president of flouting the constitution to cling to power. This week he abandoned plans to seek a fifth term, but he also canceled next month’s presidential election without setting a new date and replaced key ministerial posts, including that of prime minister, with loyalists.

Teachers took to the streets to keep up pressure on the longtime president, as political uncertainty grips this gas-rich North African country.

A broad swath of opposition figures met Wednesday at the headquarters of the Islamist party El Adala and issued a statement saying: “At this historic, decisive moment, the Algerian opposition is at the side of the people.”

They called the election delay unconstitutional, and appealed for the unprecedented revolt against the ailing Bouteflika to continue. Nationwide, potentially decisive protests are expected Friday, after millions have come to the streets in recent weeks.

“We want the transition (to new elections) to be as short as possible,” he added.

Former foreign minister Lakhdar Brahimi, who is close to Bouteflika, said, “we want to organize successful elections in a climate of serenity to preserve the stability of Algeria.”

Brahimi denied reports that he would chair a conference planning Algeria’s future, adding: “I say to the young Algerians who protest, do not destroy Algeria, like Iraq and Syria.”

Algerians have barely seen their president since he suffered a stroke in 2013, and question his fitness for office. Protesters are also angry about corruption and secrecy in Algeria’s power structure.

Wednesday’s opposition gathering included prominent Islamists and rival secular parties, two former prime ministers and others who have served in Bouteflika’s governments but have since turned against the country’s leadership.

However it didn’t include all opposition forces, and overall the opposition has failed to come together around a single figure seen as a viable alternative to Bouteflika.

Meanwhile, teachers protested Wednesday outside the central post office in Algiers, and Algerian media reported teachers’ protests in other cities too.

The demonstrators demanded that Bouteflika step down now, or at the latest when his current term ends next month.

Bouteflika returned Sunday from two weeks in a Geneva hospital. A fighter in Algeria’s war for independence from France, he is notably appreciated for reconciling his deeply damaged nation after a decade-long Islamic insurgency in the 1990s left some 200,000 dead.

Thomas Adamson and Angela Charlton in Paris contributed to this report.

Photo: Teachers hold placards reading, on the left, “You have millions. We are millions of teachers” and in the center “I dream of a democratic Algeria”, during a protest in Algiers, Algeria, Wednesday, March 13, 2019. Algerian teachers gathered outside the central post office in the capital Algiers to protest President Abdelaziz Bouteflika’s decision to delay next month’s presidential election. (AP Photo/Anis Belghoul)