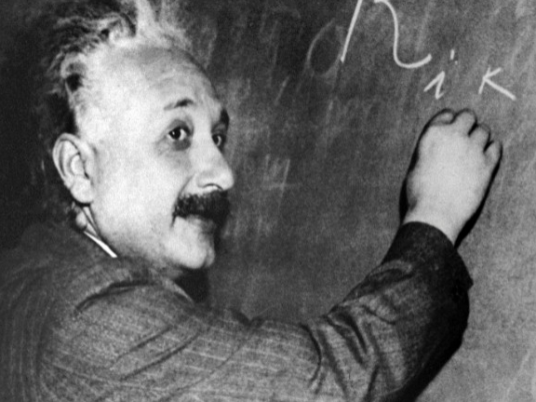 Einstein was right.
Just over 100 years after he published his general theory of relativity, scientists have found what Albert Einstein predicted as part of the theory: gravitational waves.
"We have detected gravitational waves. We did it," said David Reitze, executive director of LIGO, the Laser Interferometer Gravitational-Wave Observatory, which was created to do just what Reitze announced.
Reitze made the announcement Thursday at the National Press Club in Washington surrounded by other LIGO researchers and National Science Foundation head France Cordova.
The gravitational waves — ripples in space-time — were created by the merging of two black holes, Reitze said. One black hole had the mass of 29 suns; the other was the equivalent of 36 suns. Each was perhaps 50 km in diameter.
More than a billion years ago — LIGO estimates about 1.3 billion — the two collided at half the speed of light. Gravitational waves pass through everything, so the result traveled through the universe for that time before reaching Earth.
The 'chirp' of black holes colliding
The gravitational waves stretched and compressed space around Earth "like Jell-O", said Reitze.
However, the waves are so small that it takes a detector like LIGO, capable of measuring distortions one-thousandth the size of a proton, to observe them. They were observed on September 14, 2015.
Scientists heard the sound of the black holes colliding as a "chirp" lasting one-fifth of a second. Though gravitational waves aren't sound waves, the increase in frequency the collision exhibited in its last milliseconds — when the black holes were mere kilometers apart and growing closer — is a frequency we can hear, said Deirdre Shoemaker, a Georgia Tech physicist who works on LIGO.
LIGO is described as "a system of two identical detectors" — one located in Livingston, Louisiana, the other in Hanford, Washington — "carefully constructed to detect incredibly tiny vibrations from passing gravitational waves." The project was created by scientists from Caltech and MIT and funded by the National Science Foundation.
Szabolcs Marka, a physicist at Columbia University who is leader of the LIGO member Columbia Experimental Gravity Group, said you could think of it as "a cosmic microphone."
Einstein's concepts
Gravitational waves were predicted by Einstein in his general theory of relativity in 1915, the theory that proposed space-time as a concept. The waves are a distortion of space-time.However, in order for us to detect them, they needed to be created by a mammoth event — for example, the collision of two black holes.
Black holes are a holy grail of the gravitational wave concept. To date, we'd been able only to see their after-effects. Black holes themselves were a conjecture.
"There's been a lot of indirect evidence for their existence," says Shoemaker, an expert in black holes. "But this is the first time we actually detect two black holes merging and we know the only thing that predicts that [is] gravitational radiation, [which] comes from a binary black hole merging. There's no other way we could have seen that but gravitationally."
'Now we can listen to the universe'
But is LIGO correct? Have we really detected gravitational waves?
Scientists have what they call a "five-sigma" standard of proof, and LIGO's researchers say the gravitational wave discovery exceeds that.
"It took six months of convincing ourselves that it was correct," says Shoemaker. "It goes beyond that five-sigma to proving that nothing was happening with the equipment that couldn't be understood."
She's thrilled with the possibilities.
"Imagine having never been able to hear before and all you can do is see," she says. "Now we can listen to the universe where we were deaf before. It's a different spectrum [from the electromagnetic spectrum]. It's unlike anything we've ever detected before."
"What's really exciting is what comes next," said Reitze at the announcement. "I think we're opening a window on the universe — a window of gravitational wave astronomy."
Einstein would be surprised
Columbia University physicist Marka, who's been working on the project for more than a decade, said the discovery will open up new horizons, including direct tests of Einstein's general theory. Those could further support it — or force physicists to come up with new ideas.
"A physicist is always looking for a flaw in a theory. And the only way to find a flaw is to test it," Marka told CNN.
"Einstein's theory did not present any flaws to us yet, and that is really scary. Physicists are very [skeptical] of flawless theories because then we have nothing to do."
Ironically, Einstein didn't think gravitational waves would be discovered.
"He thought gravitational waves are a beautiful construct, but they are so small nobody would ever be able to actually measure it," said Marka.