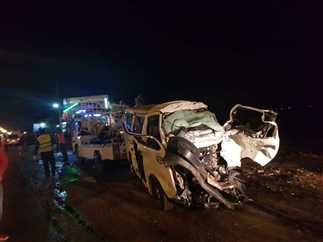 Four people were killed and 13 others were injured on Sunday evening in a collision between a bus and a small truck on the Aswan-al-Alaqy road in southeastern Aswan.

Police forces and nine ambulances were dispatched to the scene of the collision.

The deceased were transferred to the Aswan morgue, and the injured were taken to Aswan University Hospital for treatment. The remnants of the two damaged vehicles were removed from the road and prosecutors were notified to start an investigation into the collision.

According to a report by Egypt’s Central Agency for Public Mobilization and Statistics (CAPMAS) for 2017, road accidents that year resulted in 3,747 deaths, 13,998 injuries, and 17,201 damaged vehicles.

The report claims that the leading cause of road accidents is the human factor at 78.9 percent of total cases, followed by vehicle defects at 14 percent, and environmental causes, such as road conditions, at two percent.

In another report, CAPMAS mentioned that collisions had declined by 24.2 percent in the first half of 2018.

In another incident, police said on Thursday that eight persons were killed and another five injured after a collision between a microbus and a tractor trailer on the Upper Bridge in Damanhur City.

The Damanhur police station reported the accident to the Beheira Security Directorate, clarifying that the microbus collided with the tractor trailer when it was moving along the Damanhur-Alexandria Agricultural highway.

8 dead, 5 injured due to collision in Beheira