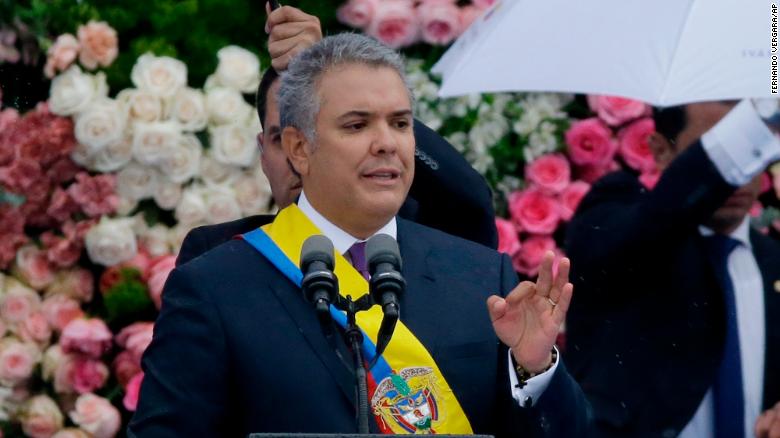 (CNN) – Colombian President Iván Duque is facing a diplomatic row with Israel in his first week in office after the outgoing government recognized Palestine just days before the end of its term.

The announcement was made public Wednesday, with the release of a letter to Palestinian Foreign Minister Riyad Malki. The letter was written on August 3 and signed by then-foreign minister María Ángela Holguín Cuéllar.

“We will analyze the implications and the content of the note with all our attention and the government will take the steps determined by international law,” Foreign Minister Carlos Holmes Trujillo told reporters Wednesday in Bogota.

The Israeli embassy in Colombia called the decision a “slap in the face” in a statement released on its official Facebook page late Wednesday.

“The Embassy of Israel is both surprised and disappointed by the decision of the previous government to recognize Palestine as a state,” the statement said. “This is a slap in the face from a loyal ally that contradicts the closeness and relationship between both countries and their leaders.”

But Colombia’s outgoing administration, in the letter, believes that efforts to bring peace to the region should be doubled.

“We believe that direct negotiation is the best way to reach a lasting and fair solution to this conflict, that will allow both nations and their people to coexist peacefully. Just like the Palestinian people have a right to build an independent state, the people of Israel have a right to live in peace next to their neighbors.”

The Palestinian Diplomatic Mission in Colombia said Wednesday on its official Facebook page that “the Palestinian people and their government were profoundly grateful” for the move.

“We thank the Colombian government for making this decision. We are certain it will contribute significantly towards generating the necessary conditions in the search for peace in the Middle East,” the statement said.

During the election campaign, Duque, who was elected in June, refused to rule out the prospect of moving the Colombian embassy to Jerusalem, insisting he wanted to “maintain the best possible relations with the state of Israel.”

Israeli Prime Minister Benjamin Netanyahu was scheduled to attend Duque’s inauguration, but canceled the trip last week because of ongoing tensions around Gaza.