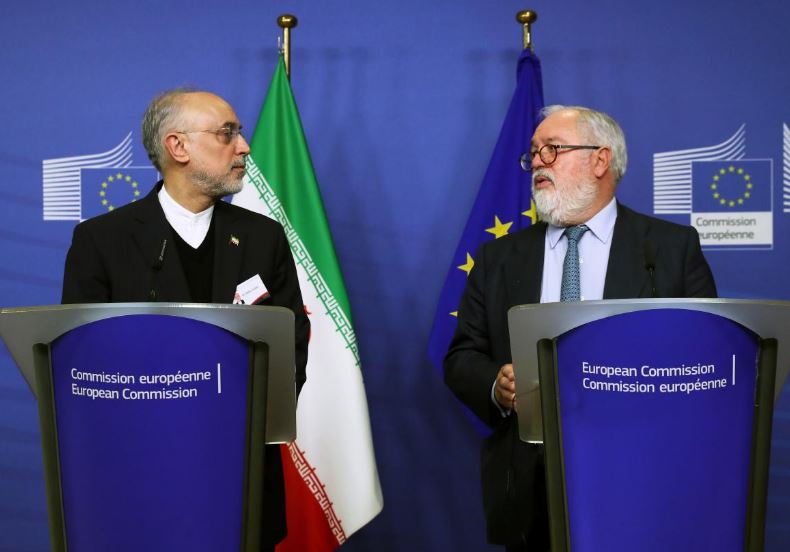 Ali Akbar Salehi, Iran’s nuclear chief and former foreign minister, has warned that Iranians are running out of patience with the European Union’s pledge to maintain trade with Tehran despite ramped-up US sanctions against its oil and banking sectors. “If we cannot sell our oil and we don’t enjoy financial transactions, then I don’t think keeping the deal will benefit us anymore,” Salehi said ahead of a Nov. 27 meeting with EU foreign policy chief Federica Mogherini in Brussels.

European powers – Germany, France and Britain – have been under enormous pressure from Washington to follow its example and withdraw from the Iran accord, also known as the Joint Comprehensive Plan of Action (JCPOA). President Donald Trump has warned that those who help Tehran circumvent sanctions “will NOT be doing business with the United States.” The Islamic Republic has not helped to facilitate effective cooperation with Europe either. Iran has resisted calls to implement the requirementsof the Paris-based Financial Action Task Force (FATF) to combat money laundering and terrorism financing. At the same time, Tehran-affiliated agents have tried to carry out assassination and bombing plots on European soil over the past several months, damaging political and diplomatic efforts to build constructive ties between Iran and Europe.

Why, then, is the EU still so determined to save the Iran nuclear deal? The answer lies in European fears of the security and economic consequences if the JCPOA collapses – and perhaps also in how Tehran might be able to pressure Europe to salvage the deal.

While worries about the unravelling of the JCPOA and Tehran’s possible moves to develop nuclear weapons continue, European powers seem to be less concerned about a nuclear Iran per se than what would happen if the United States or Israel and its Arab allies went to war to prevent that outcome. Despite US, British and French objections against Iran’s Dec. 1 test of a medium-range ballistic missile that was reportedly capable of carrying nuclear warheads, neither of the two European nations pushed for punitive action against Tehran during a subsequent closed-door meeting of the United Nations Security Council (UNSC). “There is no legitimate reason why Iran should flout the resolution,” said Britain’s UN Ambassador Karen Pierce, referring to a 2015 UNSC resolution on the Iran nuclear deal and missile work.

A US or Israeli-led war would be unlikely to involve Europe directly, but any war could still have a significant effect on the continent’s security and economy. Tehran might also resort to tactics that pressure Europe to intervene or help thwart foreign aggressors. During the “tanker war” phase of the Iran-Iraq War, Tehran targeted non-belligerent shipping in the Persian Gulf for similar purposes.

Perhaps the first option at Iran’s disposal is unleashing a massive wave of migration toward Europe. While a war is likely to push many Iranians to flee the country, as they did during the 1979 revolution and subsequent war with Iraq, the Islamic Republic might also use as leverage the threat of making life more difficult for its Afghan refugee population, estimated to number up to three million. This could strain the European Union’s humanitarian and welfare infrastructure. The Syrian civil war demonstrated all too clearly that this is Europe’s Achilles heel, with anti-migrant protests in EU nations leading to governments adopting measures like stricter border control policies or striking a controversial deal with Turkey in March 2016 to halt the influx of those seeking refuge.

Iranian leaders know this well. In an early July speech, Iran’s interior minister Abdolreza Rahmani Fazli warned that if Tehran “closed its eyes for 24 hours,” over a million refugees and asylum seekers would leave for Europe. “We would not do that on religious and humanitarian grounds and are committed to international rules and peace,” he said, adding, in a tacit reference to the United States and the EU, “but the question is, why others are not committed to these rules?”

Iran could pressure Europe over drug trafficking too. Situated on the main narcotics transit route that stretches from Afghanistan to Central Asia and Eastern Europe, Iran acts as a bulwark against international narcotics trafficking, when it chooses to do so. In the same speech, Fazli cited the rise in drug production in Afghanistan to over 9,000 tons a year, warning that if Iran looked the other way, “over 5,000 tons of narcotics would leave Iran’s borders for the West.”

Finally, since its birth as a revolutionary state in 1979 and in place of reliable conventional alliances, Iran has systematically tried to foster a regional network of non-state actors and proxies. These groups have historically served as a pillar of Tehran’s strategy to expand its influence and deter aggression. This tactic can be expanded in times of war to threaten European security. In other words, the Islamic Republic can harness its ties with militant organizations such as Hezbollah or condone plots by the likes of al Qaeda to punish its rivals.

In a rare explicit warning to European powers in November, Abbas Araghchi, Iran’s deputy foreign minister and chief nuclear negotiator, raised the possibility of such a situation. “If Europeans buckle [under US pressure over Iran], they have basically questioned their own sovereignty, credibility and security,” he said. “If Europe thinks West Asia would be safer without JCPOA, well, they are free to try it.” he continued. “Can Europe cope with a new wave of terrorism, migration and nuclear crisis?”

The centrist government of President Hassan Rouhani has repeatedly praised Europe’s “political will” to salvage the nuclear deal, including plans to establish a Special Purpose Vehicle (SPV) for conducting financial transactions with Iran by skirting US sanctions. The big question now is whether the European Union will be able to deliver on its pledges as American pressure mounts.