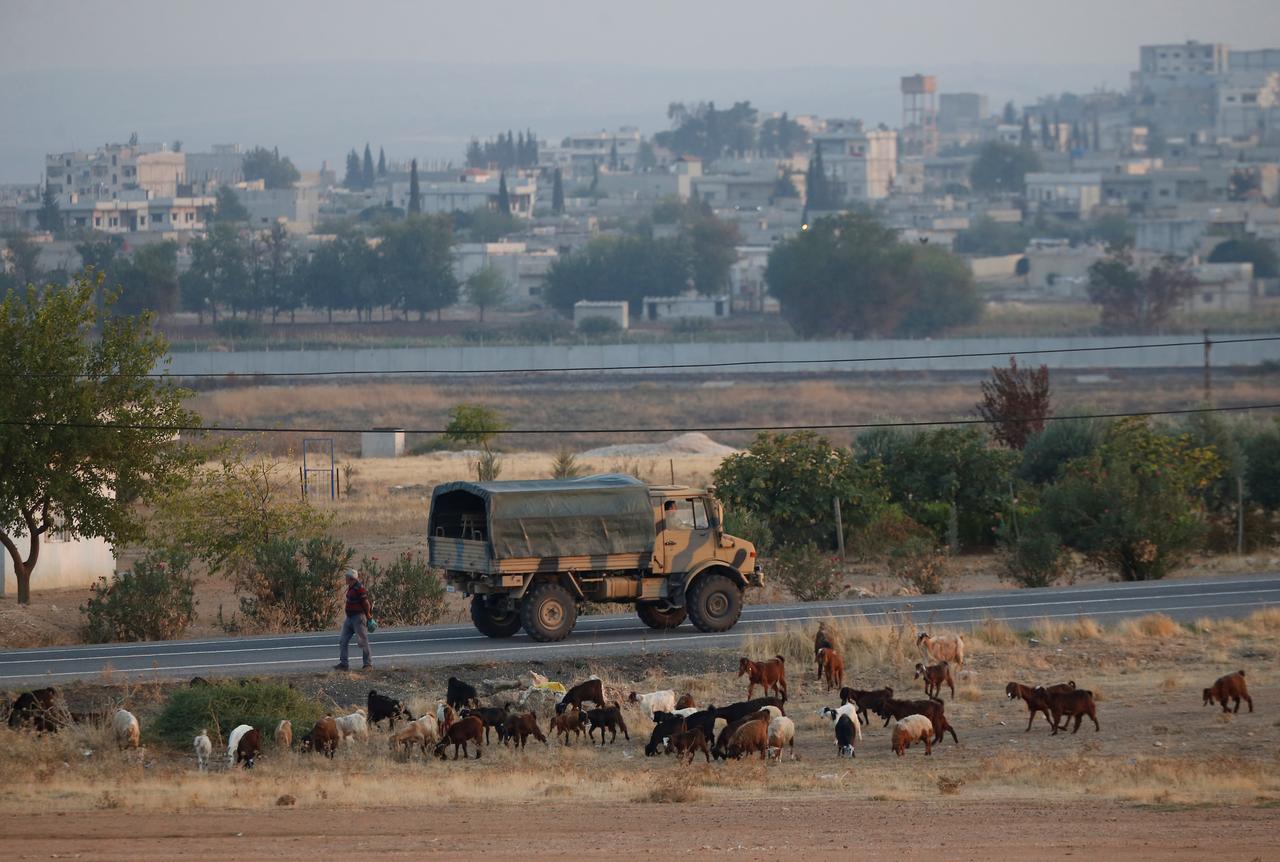 ISTANBUL (Reuters) – Turkish and Russian troops on Tuesday began their second joint patrol in northern Syria near Kobani, under a deal that has forced a Kurdish militia away from Turkey’s border, while local media released footage of angry crowds pelting a convoy with stones.

Nearly a month ago, Turkey and Syrian rebel allies launched a cross-border incursion against Kurdish YPG fighters, seizing control of 120 km (75 miles) of land along the frontier.

Under a subsequent deal, Russia and Turkey agreed to push the YPG militia to a depth of at least 30 km (19 miles) south of the border and to hold joint patrols to monitor the agreement.

President Tayyip Erdogan said on Tuesday that the YPG had not withdrawn from that planned “safe zone”, despite Turkey’s agreements with both Russia and the United States.

Ankara considers the YPG – which helped the United States smash the Islamic State caliphate in Syria – a terrorist group because of its ties to militants who have waged an insurgency in southeast Turkey since 1984.

Tuesday’s patrol was launched 7 km (4.4 miles) east of Kobani, a Syrian border town of special significance to the YPG, which fought off Islamic State militants trying to seize it in 2014-15 in one of the fiercest battles of the Syrian war.

Armored vehicles crossed through a gap in the border wall to the Syrian side and headed east, a witness said. Security sources said the patrol would cover a distance of 72 km (45 miles) at a depth of 5 km (3 miles) from the border.

Near Kobani, crowds pelted passing Turkish and Russian armored vehicles of the patrol with stones from a roadside and chanted slogans, footage from local North Press Agency showed.

Several dozen people managed to stop two Russian armored vehicles and some of them climbed onto one of the cars with Russian military police insignia, a video released by local news outlet Anha showed.

The Russian Defense Ministry said on Tuesday there were no incidents during the patrol mission.

The Turkish Defense Ministry shared photos on Twitter showing Turkish and Russian soldiers meeting at the border and studying maps before the start of the patrol. It said drones were also taking part.

Russia is the Syrian government’s most powerful ally and since 2015 has helped it retake much of the country from rebels, turning the tide in the civil war. The Turkish-Russian deal enabled Syrian government forces to move back into border regions from which they had been absent for years.

Russian military police arrived in Kobani on Oct. 23 under the deal reached by Erdogan and Russian President Vladimir Putin.

The first patrol, on Friday, was held around the Syrian border town of Darbasiya, east of the region from where Turkish and their Syrian rebel allies forced out the YPG fighters.

Erdogan said last week that Turkey planned to establish a “refugee town or towns” in that region between Tel Abyad and Ras al Ain, part of a project that state media have said would cost 151 billion lira ($26 billion).

Reporting by Daren Butler in Istanbul and Maria Tsvetkova in Moscow; Editing by John Stonestreet and Peter Cooney

FILE PHOTO – A Turkish military truck drives on the Turkish-Syrian border, with the Syrian town of Kobani in the background, in Suruc, in Sanliurfa province, Turkey, October 31, 2019. REUTERS/Kemal Aslan