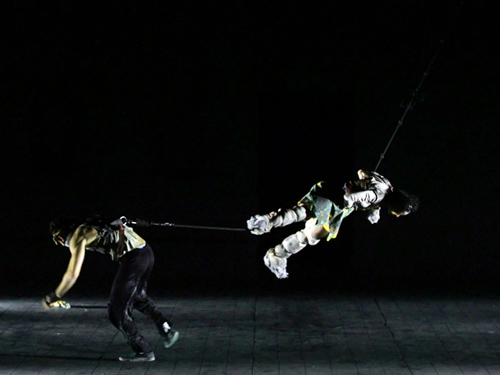 This Thursday, one of the most ambitious cultural events in Cairo’s recent history will set out to transform downtown Cairo into a center for cutting-edge music, art and theater. For two weeks, the Downtown Contemporary Arts Festival (D-CAF) will occupy spaces that have long sat dormant and enliven an otherwise quiet performing arts scene.

There will be nightly concerts in the Radio Theater on Talaat Harb Street, a space that has been out of commission for over a decade. The Townhouse Factory space will host artist talks and performances, and a mysterious exhibition entitled “I am not there,” in which most of the actual artworks of the exhibition will, in fact, not be there. Interactive theater performances will take place in the Viennoise Hotel, an atmospheric old building on Mahmoud Bassiouny Street that, until now, has served mostly as a venue for occasional art exhibitions.

While nothing quite on the scale of D-CAF has taken place before, the festival does have a precedent from which it takes inspiration. In 2001 and 2002, a crop of recently founded art galleries downtown, including Townhouse and Mashrabia, organized the Nitaq Festival, a large-scale visual arts festival that opened up such unorthodox and forgotten spaces as the Groppi Ballroom, and held concerts in the Talaat Harb Greek Club. The festival lasted only two iterations before rifts between the various galleries made future cooperation impossible. But in those two years, the project enlivened the downtown arts scene, boosted the careers of artists like Hassan Khan, Doa Ali, Wael Shawki and Hany Rashed, and began to shift attention away from Zamalek as the city’s hub for culture.

When Karim al-Shafei proposed a renewed downtown arts festival in 2010, Nitaq was likely not far from his mind. Shafei is managing director of Ismailia Company for Real Estate Investments, a real estate development firm that has bought up some 20 historic buildings downtown, including the buildings that house the Contemporary Image Collective and the Townhouse Gallery. Ismailia has ambitious plans for transforming the area: to refurbish buildings, bring in new businesses and attract those who today might prefer to stay in neighborhoods like Zamalek or Heliopolis, steering clear of the chaotic neighborhood that has been a focal point of sometimes violent street action over the past year.

“We would like to see a revival of downtown as a destination for different segments of Egyptian society,” Shafei told Egypt Independent. “The offerings of the retail stores and even the general atmosphere are not inviting for certain segments of society. D-CAF will attract people from all segments of society, so it fits right into our strategy for downtown,” suggesting he hopes the festival will spark more upmarket interest in the area.

As plans for D-CAF became more concrete, Ahmed Attar, a theater director and the director of Studio Emad Eddin and Orient Productions, took over the project as the artistic director and organizer of the project, and D-CAF was set up as a loose coalition of partners. Ismailia is now involved with the festival as a sponsor, and has donated the use of two of its buildings, the Radio Theater and the Viennoise Hotel. The buildings have been prepared for performances, though Ismailia has yet to embark on any major renovations. The ever-shifting political situation in Egypt has made such a major investment difficult.

The festival was originally planned for April 2011, but for obvious reasons had to be postponed to April 2012; the late-spring timing is not accidental. Attar hopes that D-CAF will go some lengths toward raising Cairo’s profile as a center of art and culture in the Middle East, and springtime is festival time in the region, when the Dubai Art Fair, the Sharjah Biennial and the Home Works Festival in Beirut all take place.

Attar told Egypt Independent, “We wanted to place ourselves in the middle of the crossroads, so when the festival gets an opportunity to be known, it circulates information. You can come to Cairo before going to Dubai, etc.”

That is not to say that D-CAF seeks to cater to an international audience, but rather that it seeks to be of international caliber — in its level of organization and in the performances and exhibitions that it highlights.

“Cairo needs an international art event. The audience in Egypt, in Cairo deserves to receive the latest and best in the art world, whether in music, performing arts, or visual arts, and it does not,” Attar says.

The latest and best is very much what the festival will deliver, with a mix of both Egyptian and international artists. The visual arts section of the festival, curated by Mia Jankowicz, director of Contemporary Image Collective, kicks off with a lecture-performance by Seoul-based Korean-American duo, Young Hae Chang Heavy Industries, who produce web art in the form of text-based Flash animations, and the exhibition “I am not there” includes works by such well-known Egyptian artists as Ayman Ramadan and Huda Lutfi.

The music section, organized by Mahmoud Refaat, director of 100 Copies, features experimental artists like Hassan Khan and Moroccan group DUBOSMIUM, who describe their sound as “Abstract Dub.” The theater and performing arts sector was selected by Attar himself, and also maintains an emphasis on the experimental, including, for example, two plays — OkOk and GuruGuru — in which the audience members are the actors.

Putting together such a program has not come without its difficulties, the most looming of which has been finding the money to pay for it all. Attar had hoped to bring in corporate sponsors to cover the festival’s significant expenses, but companies were reluctant to invest.

“When our fundraiser went to Nokia or Pepsi or places like that, their idea of an arts festival was Sakia [El Sawy Culture Wheel] or the Heliopolis festival that Mubarak used to do,” says Attar. “But this is a contemporary arts festival. It has international exposure, it has a message, it connects with the audience to present them with new forms of art from Egypt and internationally. They did not understand.”

D-CAF found funding from a variety of international culture organizations, along with Ismailia and the Fairmont Hotel, but they are nonetheless struggling to cover expenses. “We are actually facing quite a heavy financial situation,” says Attar.

Attar’s hope is that this first festival will be a booming success, drawing crowds to downtown, as well as international attention, and that next year more companies will be ready to invest. And while the festival’s future may be precarious, this first iteration is bringing something to Cairo that the city has not seen before.

Will the audiences come? Will the funders line up for D-CAF 2? It remains to be seen. But some questions are more easily answered. What should you do with your free time for the next two weeks? Check out D-CAF.

For more information about programming and schedules, look at the D-CAF website, or call 25763850. Tickets are available at the Radio Theatre, 24 Talaat Harb St., Downtown; and at Orient Productions, 19 Emad Eddin St., Downtown.