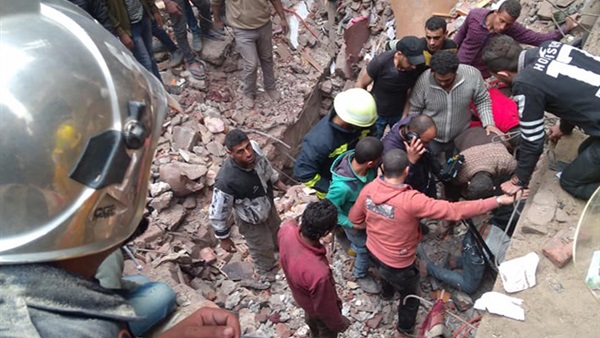 The death toll of Thursday’s building collapse in the working-class Cairo neighborhood of Manshyiet Naser has risen to 9 after five more bodies were found in the rubble.

The Public Prosecution ordered the bodies to be transferred to the families while assigning a committee composed of engineers in the neighborhood to inspect the building.

The prosecution said the building is composed of six floors and housed 12 families.

A source familiar with the investigation pointed out that the collapse occurred due to the demolition of another building located close by.

The injured said that the collapsed building had been in good condition but that drilling work carried out in the adjacent building weakened the foundations of the building that collapsed.

Egypt’s Health Ministry said that three people initially were killed, including a child and an elderly woman, and 18 others injured after the collapse occurred on Thursday.

State news agency Al-Ahram reported on Friday that the municipal council had earlier issued an evacuation order for the collapsed buildings, and others on the same street. However, residents say they did not receive such an order.

Glow, a non-governmental community service organization that operates in the area, announced the incident on its Facebook account, asking for donations to provide rescuees with food, blankets and shelter.

Despite the existence of rigorous laws regulating the construction and maintenance of buildings in Egypt, the lack of sufficient implementation by authorities has resulted in many buildings collapsing over the years.

A survey conducted by the Cairo-based Egyptian Initiative for Personal Rights in June 2014 stated that during the course of just one year (2012-2013), 392 residential buildings collapsed resulting in 192 deaths and 824 families made homeless. The organization attributed the recurring collapses in Egypt to the “lax enforcement” of building laws and the “lack of proper planning and development.”

Beware of the garbage collectors’ war against the state and society