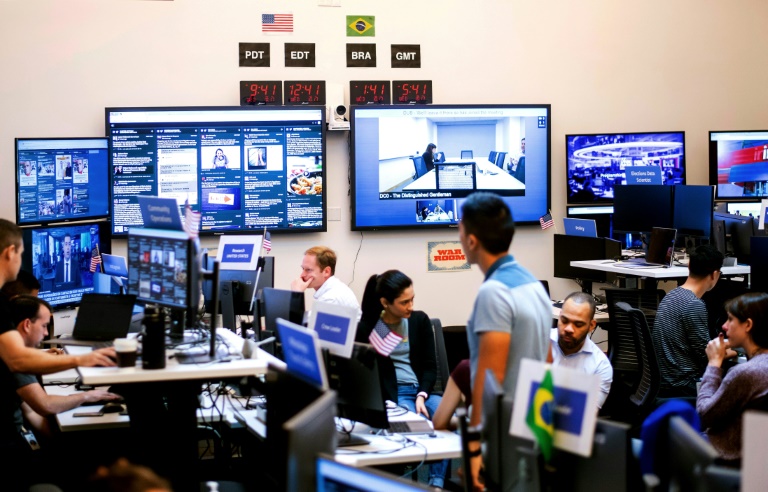 Despite an aggressive crackdown by social media firms, so-called “junk news” is spreading at a greater rate than in 2016 on social media ahead of the US midterm elections, according to researchers.

In analyzing some 2.5 million tweets and 6,986 Facebook pages over a 30-day period, the study found that less than five percent of the sources referenced on social media were from public agencies, experts or political candidates themselves.

“We found that the proportion of junk news circulating over social media has increased in the US since 2016, with users sharing higher proportions of junk news than links to professional content overall,” the report released Thursday said.

It added that “junk news once concentrated among President (Donald) Trump’s support base has now spread to include communities of mainstream political conservatives.”

Philip Howard, director of the institute and a study author, said the latest research did not seek to analyze how much of the content came from automated accounts or “bots,” or whether it was directed from foreign entities.

But he noted that “this style of producing junk news probably has a Russian origin,” adding, “that’s what the Russians used in the 2016 election, and now there are domestic sources copying that style.”

Howard said the efforts by Twitter and Facebook to root out misinformation amounted to “tweaks,” and that “the evidence suggests little tweaks don’t add up to a big impact.”

As part of the research, the authors created an online tool to allow anyone to follow and analyze low-quality news and posts.

“We respect and appreciate strong independent research but we challenge some of the findings here,” a Twitter spokeswoman said in a statement to AFP.

“Many of the links deemed as ‘junk’ by the researchers are media outlets that reflect views within American society. Banning them from our service would be a knee-jerk reaction and would severely hinder public debate, the potential for counter narratives to take hold, and meaningful discussion of news consumption.”

Twitter said many of the sources cited in the study were “not foreign, not bots, and for the most part not coordinated. They are real people sharing news that reflects their views.”

Facebook pointed to other research suggesting a decline in misinformation.

“The conclusions drawn in this research shouldn’t be seen as the authority on this topic,” Facebook said in a statement.

“The central takeaway of this study — that, ‘the proportion of junk news circulating over social media has increased since 2016’ — is actually based on data from Twitter and then applied to ‘social media’ more broadly.”

The Oxford researchers said that its definition of “junk” is based on specific criteria, including a lack of professional journalism practices, use of hyperbole or misleading headlines, and relying on untrustworthy sources of information.

Jennifer Grygiel, a Syracuse University professor specializing in social media who is not affiliated with the Oxford study, said she was not surprised by the findings because of the design of social networks.

“If we are starting to feel like this is a world of reality TV, it’s by design, That’s how the system was built.”

Grygiel said that Twitter’s algorithms give priority to “verified” users, but that those who get the verification badge are more likely to be celebrities than academics or intellectuals, and this can result in proliferation of gossip and “tabloid-style” news.

She noted that while social networks have begun to crack down on “coordinated and inauthentic” efforts by foreign entities, this has not impacted what many consider as “low quality” news.