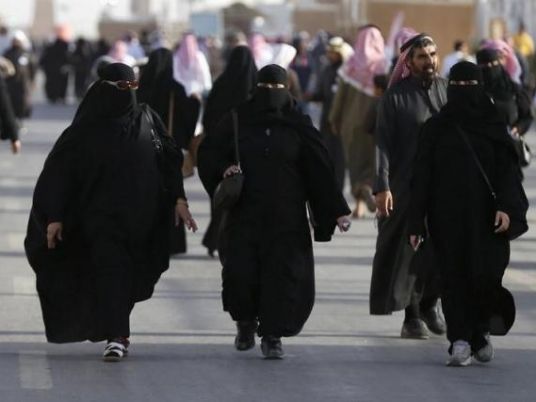 Saudi Arabian laws requiring women to have male guardians have been reformed in recent years but continue to restrict and endanger them, obstructing government plans to reform the economy, US-based Human Rights Watch says in a report.

The report drew criticism on Sunday from a government rights official, who said the system was designed to protect and help women, and was less restrictive than portrayed by HRW.

Women in Saudi Arabia must usually obtain permission from a guardian — father, husband, or son — to travel, study or marry.

These laws, making women legal wards of a male relative and backed by a powerful clerical establishment, have in recent years been reformed, with women no longer needing to obtain male guardian permission to work, Human Rights Watch (HRW) said in the report, "Boxed In: Women and Saudi Arabia’s Male Guardianship System."

But the system remains largely intact and an impediment to realizing women’s rights, it said.

"It conflates the laws on women's guardianship that authorities are being asked to amend or develop with customs prevailing in society that may… take time to change," he said.

Dozens of Saudi women interviewed by HRW said their lives were subject to male supervision when it came to applying for a passport, leaving the country, getting married and accessing courts and medical treatment.

A 25-year-old woman referred to as Zahra, whose father used to beat her and later refused to allow her to travel overseas to study, was quoted as telling HRW: "Whenever someone tells me, ‘You should have a five-year plan,’ I say I can’t. I’ll have a five-year plan and then my dad would disagree. Why have a plan?"

Other women told HRW their friends or relatives had sought to marry to escape strict, conservative, or abusive fathers and brothers. A woman named Tala said: "The guardianship system is always a nightmare. I don’t want to get married because I don’t want a stranger to control me … Basically, it is slavery."

Women are not allowed to drive and face difficulty in many transactions such as renting an apartment, without a male relative.

But the late King Abdullah in 2011 gave women the right to vote and run for office in local elections, and in 2013 appointed 30 women to the Shura Council, the appointed parliament that discusses new laws and advises the government on legislation.

Deputy Crown Prince Mohammed bin Salman unveiled in April an ambitious plan to transform the economy by 2030, which envisages increasing women's participation in the workforce to 30 percent from 22 percent.

HRW's Kristine Beckerle said the kingdom could not achieve this vision if it did not abolish male guardianship.

Officials often say the failure to end discrimination against women is not due to state policy but difficulties in implementation.

On the question of travel, Qahtani said: "There is no problem for any woman to travel in the absence of a dispute in the family. In the event of a dispute it must be resolved first to ensure each party fulfils its obligations toward the family."

He added: "One should bear in mind that Saudi society is conservative and some of the customs and traditions of the society need time to be adjusted."