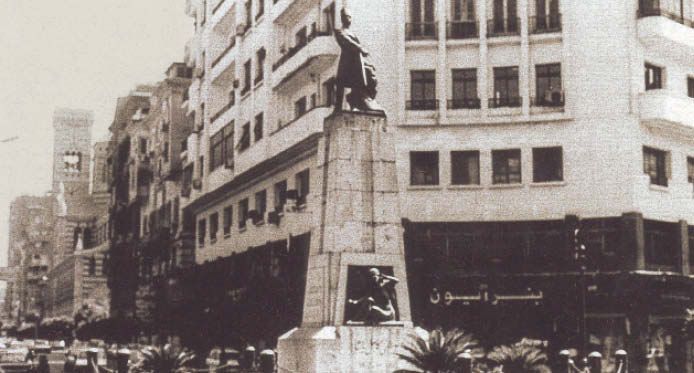 The entryway is warm and welcoming, despite the vast space and the vaulted ceilings. Huge green walls embrace tens of wooden tables arranged symmetrically, carrying hundreds of fabric rolls. Each “rayon” specializes in a certain type of fabrics — a table for cottons, another for linens, a third for silk, and so on.

The cafeteria is to the right, separated from the main hall with a white paravan made of intertwined branches of steel. Opposite the cafeteria is the home appliances section, while the “prêt à porter” (ready to wear clothing) is upstairs.

This was what the colossal department store Salon Vert used to be like. The store dates back to the days when the latest fashion items appeared in Egypt as soon as they were released in France. It’s part of a long lineage of downtown Cairo department stores, like Cicurel, Shemla, Benzion, Sednaoui, Simon Arzt, Chalons, Gattegno and Pontremoli. These European-style megastores were intended to be the equivalent of Les Galleries Lafayette in Paris and catered to the crème de la crème of Egyptian society. All these luxury outlets were located between Sherif and Fouad streets.

Cicurel started the downtown department store trend in 1910, when founder Moreno Cicurel opened a small boutique called Au Petit Bazar on Boulaq Street (later called Fouad Street). You could find anything at Cicurel — the range was endless, from lavish glass, fabrics and cosmetics to the latest in Parisian fashions. Cicurel survived it all — the fire that devastated downtown Cairo in January 1952, and even the nationalization of major businesses after the Free Officers Coup later that same year, thanks to Solomon Cicurel’s good relationship with the generals. It was only in 1957 that Cicurel decided to sell his department store and join the rest of his family in Europe.

Other stores weren’t so lucky. The great Cairo Fire of 1952 burned more than 300 shops down to the ground, and, after rebuilding, many boutiques never regained their former glamour. Most of the other stores were also nationalized by late President Gamel Abdel Nasser in the 1950s and 1960s.

Today, the old department stores hold nothing but the names of their previous owners; many were dismantled and rented out by the meter to wholesalers to display low-priced merchandise and electric appliances.

“It looks like the flea market at Attaba,” Farida Abdallah, an avid downtown shopper, says of Salon Vert today.

Here, your receipt and shopping bag now read: “A branch of the Faisal al-Rasheed Group.”

“We have gotten into a partnership with a Kuwaiti sportswear company,” the cashier explains. The colossal store has gone through a serious face lift; the walls have been painted a lifeless white, and neon lights hang from the ceiling. The shelves are stocked with cheap Chinese merchandise and counterfeits of international brands.

A similar transformation occurred to the storied Sednaoui department store, located at the top of Qasr al-Nil Street. More than a year ago, the golden logo adorning the head of this architectural masterpiece was replaced by a new blue sign that reads “Arafa Group.” The big store now sells sportswear and kitchen appliances and caters mainly to middle class customers.

“These downtown stores cater to the middle and low middle class,” says Said Sadek, a professor of political sociology at the American University in Cairo.

“Shopping habits are directly related to lifestyle,” Sadek explains. After the 1952 revolution, many army officers, appointed as guardians over the nationalized companies, moved to the posh downtown area. Many shops changed their merchandise to cater to their new clientele, and the stores gradually changed in character over the coming decades.

Saeed, manager of the Pontremoli department store, disagrees with Sadek, however.

“We still get the crème de la crème customers we got before,” he insists, although he has difficulty answering questions about the history of the store, founded in the early 20th century by the Italian investor Illie Ralf Pontremoli, whose picture still adorns the store’s walls.

But Saeed seems to have the minority opinion; many believe the entire neighborhood has gone from bad to worse. “Street vendors are downtown’s new plague,” a young woman walking past the store tells Egypt Independent. “Everything is sold on the pavement, from socks and undergarments to cell phones and home appliances.”