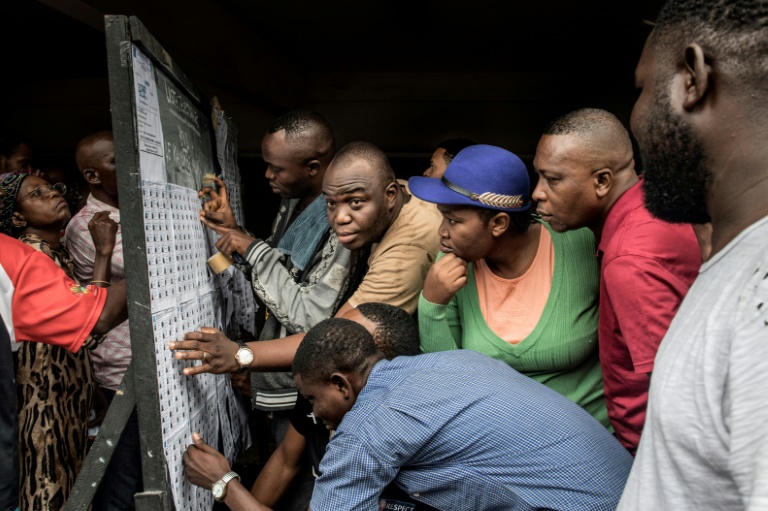 The Democratic Republic of Congo on Monday began a tense wait for the results of a volatile presidential election which could see the first peaceful transfer of power in decades.

Sunday’s elections went ahead in “relative calm”, according to the country’s influential Catholic Bishop Council, after two years of delays in the notoriously unstable country.

But there were reports of clashes at polling stations in the restive eastern South Kivu province that claimed the lives of a police officer, an electoral official and two civilians.

While the vote could result in the first peaceful transition of leader since the country gained independence from Belgium in 1960, analysts warned the threat of upheaval was great — given organizational hitches and suspicion of President Joseph Kabila, who refused to quit in 2016 after his two-term limit expired.

The election’s credibility has been strained by delays and accusations that electronic voting machines would help to rig the result.

Kabila appeared on public television late Sunday to congratulate the Congolese for having voted “in peace and dignity”.

Catholic Church observers, who were present at 78 percent of polling stations, were due to report Monday on the ballot-counting process.

On Sunday evening, violence erupted at a polling station in the Walungu area of South Kivu province after an electoral official was accused of trying to rig the vote in favor of Kabila’s preferred successor, according to an opposition candidate’s campaign chief.

“An agitated crowd started fighting with police. An officer was killed, which we deeply regret,” said Vital Kamerhe, who has been campaigning for Felix Tshisekedi.

The mob “then attacked the electoral official who died. Two civilians were also killed,” he told AFP of the incident which South Kivu authorities said was being investigated.

Kabila’s champion Emmanuel Ramazani Shadary declared Sunday to Actualite.cd news site: “You saw how I campaigned, everything that happened. I’ll be elected, I’ll be president from tonight.”

Meanwhile Tshisekedi, one of his biggest rivals and the head of a veteran opposition party, UDPS, predicted: “Victory is ours.”

He has garnered around 44 percent of voting intentions, followed by Tshisekedi with 24 percent and Shadary with 18 percent, said Jason Stearns of the Congo Research Group, based at the Center on International Cooperation at New York University.

If the elections are “free and fair,” an opposition candidate will almost certainly win. However, “the potential for violence is extremely high,” he warned.

Roughly half of respondents said they would reject the result if Shadary — a hardline former interior minister who is facing EU sanctions for a crackdown on protesters — was declared winner.

Many voters said they were exhilarated at taking part in the first elections after the nearly 18-year Kabila era.

“I feel liberated, freed,” said Victor Balibwa, a 53-year-old civil servant, casting his ballot in Lubumbashi, the country’s mining capital in the southeast.

But there was also much evidence of organizational problems, including with the contested voting machines.

A monitoring commission with 40,000 grass-roots observers, set up by the Catholic Church, said it had received 1,543 reports of incidents by early afternoon.

Of these, 544 involved “malfunctions with voting machines,” it said.

In some places, long queues built up because of a lack of electoral roll or because voters could not find their names on the lists, AFP reporters found.

At Imara in Lubumbashi, 30-year-old voter Diane Mumba, said: “The (voting) machines have been breaking down again and again for the last two hours. I don’t know when I am going to vote.”

The vote for a new president took place alongside legislative and municipal polls.

Almost the size of continental western Europe, the DRC is rich in gold, uranium, copper, cobalt and other minerals, but little wealth trickles down to the poor.

In the last 22 years, it has twice been a battleground for wars drawing in armies from central and southern Africa.

That legacy endures in the jungles of eastern DRC, where militias have carried out hundreds of killings.

Insecurity and an ongoing Ebola epidemic in part of North Kivu province, and communal violence in Yumbi, in the southwest, prompted the authorities to postpone the elections there until March.

Around 1.25 million people in a national electoral roll of around 40 million voters are affected.

Despite this, the elections in the rest of the country have gone ahead.