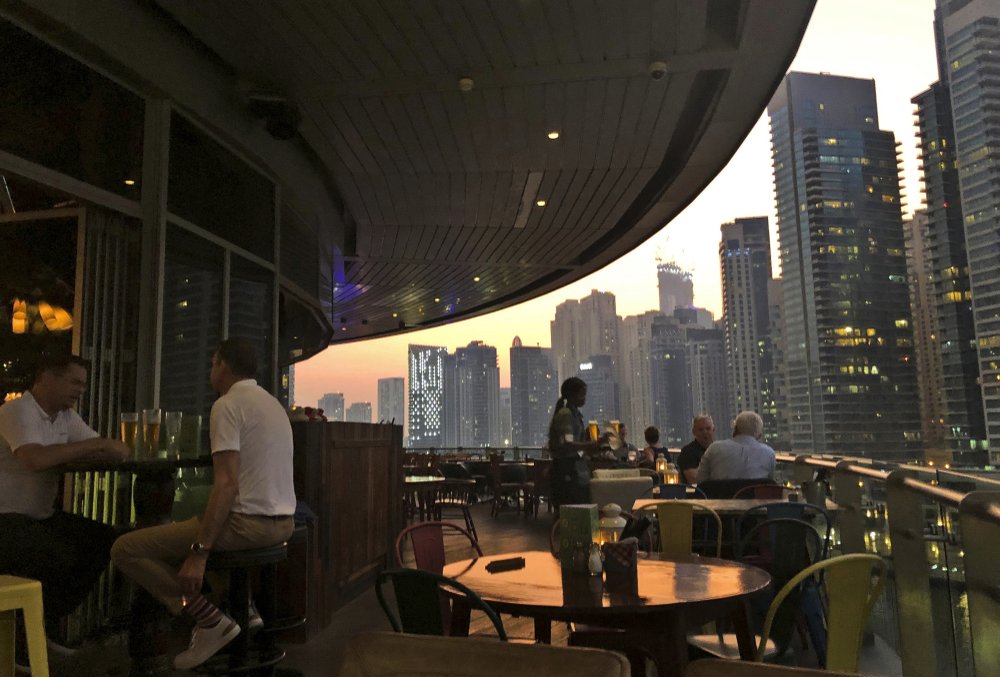 DUBAI, United Arab Emirates (AP) — Dubai has loosened its liquor laws to allow tourists to purchase alcohol in state-controlled stores, previously only accessible to license-holding residents, as the United Arab Emirates saw the first drop in alcohol sales by volume in a decade.

The new laws, which also let visitors to skyscraper-studded Dubai obtain liquor permits themselves for the first time, come amid a widening economic downturn affecting this oil-rich nation on the Arabian Peninsula.

However, the laws also close a long-standing legal conundrum facing imbibing tourists who travel here. Throwing back shots, sipping a beer or indulging in a Champagne-soaked brunch in this city-state technically remains illegal without a drinker holding a permit, though no bartender ever asks to see one before pouring a drink.

“The United Arab Emirates is facing tough challenges, as changes in both consumers’ buying behavior and demographics started to have an effect,” the market research firm Euromonitor International said in a recent report.

Dubai, home to the long-haul carrier Emirates, draws visitors from around the world to the Burj Khalifa, the world’s tallest building, as well as to resorts on beaches along the Persian Gulf. Tourists wander through kilometers (miles) of air-conditioned malls, travel by SUVs into its rolling deserts and enjoy its many restaurants.

Many also have a drink while here. The United Arab Emirates dominates other countries around the Mideast when it comes to drinking, with a per-capita alcohol consumption of 3.8 liters (1 gallon) per person per year, according to the World Health Organization. That’s even with Sharjah, one of the UAE’s seven emirates, banning alcohol.

Alcohol means big business, especially for the state. There’s a 50% import tax on a bottle of alcohol, as well as an additional 30% tax in Dubai on buying from liquor stores. Dubai Duty Free, which is also government owned, sold over $2 billion of goods last year alone to those passing through its airport terminals, including 9 million cans of beer, 3 million whiskey bottles and 1.5 million bottles of wine. Duty-free sales, while limited, never required an alcohol license.

The country’s two major liquor store chains are Maritime and Mercantile International, a subsidiary of the government-owned Emirates airline, and African & Eastern. African & Eastern, which did not respond to a request for comment, is believed to be at least partially held by the state or affiliated firms.

Bars and nightclubs in Dubai are almost entirely limited to operating inside of or connected to hotels — even drink receipts at the Dubai International Airport show up as coming from a hotel attached to the airport. But even with those restrictions, alcohol-serving establishments always seem full on Thursday nights, the start of the Emirati weekend.

Slowly, however, that has begun to change. Lower global energy prices, a 30% drop in Dubai’s real estate market value and trade war fears have seen employers in the city-state shed jobs. Parking lots don’t appear quite as full as they once were as sale signs plaster shop windows.

That downturn appears to have even extended to alcohol. Overall sales of alcohol dropped to 161.5 million liters (42.6 million gallons) in 2018, down from 163.7 million liters (43.2 million gallons) in 2017, according to Euromonitor. However, tourism helped keep retail prices high overall as some consumers also sought higher-priced liquors, it said.

“Travel and tourism will continue to play an important role in the development of alcoholic drinks in the United Arab Emirates, at least until Expo 2020,” Euromonitor said, referring to Dubai’s hosting of the world’s fair next year . “After Expo 2020, sales will be more influenced by in-country demographics and dynamics.”

The hereditarily ruled government’s Dubai Media Office and the Department of Tourism and Commerce Marketing did not respond to requests for comment on the new license program.

However, thinking about tourists, authorities have taken steps in recent years to loosen drinking regulations. In 2016, Dubai eased rules prohibiting day-time alcohol sales during the holy month of Ramadan, when observant Muslims fast from dawn to dusk and abstain from anything perceived as sinful behavior. In the next few years, the Islamic lunar calendar will draw Ramadan closer to early spring and winter months, a tourist-packed time in the city before the heat takes hold.

The new procedure on alcohol permits allows tourists to obtain one for free at either African & Eastern or MMI stores after showing their passports and signing a pledge that they aren’t Muslim and will follow local law.

The process finally ends the Catch-22 that tourists here found themselves in if they drank. Local newspaper stories involving alcohol and mayhem routinely included police charging tourists for drinking without a license when they wouldn’t be able to legally register for one.

Meanwhile, driving after consuming any amount of alcohol remains illegal as does drinking in public. Recently published guidelines say any alcohol purchased in stores can only be drunk “within your hotel room/apartment.”

“What the new law does is create potential revenue through the granting of licenses, and further mislead people into thinking that they can buy and consume alcohol without any risks,” said Radha Stirling of the for-hire advocacy group Detained in Dubai. “But the same risks remain as before.”