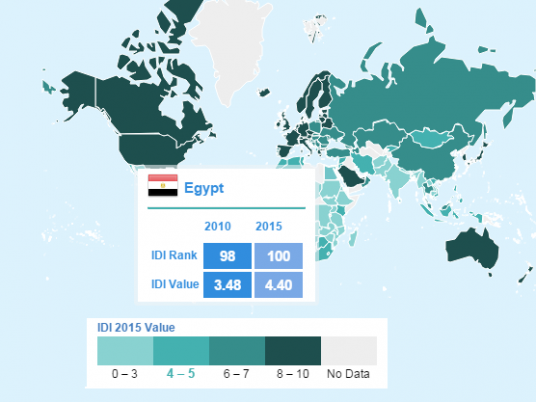 Egypt has fallen two ranks to be positioned in 100th place in a United Nations index measuring 167 countries' development in the communication and information technology sector as well as citizens' access to communication technology.
The ICT Development Index (IDI), prepared by the International Telecommunication Union, shows Egypt down from position 98 in 2010 to 100 in 2015.
The index, part of the Measuring the Information Society Report, said 36.78 percent of Egyptian households have internet access while 45.08 percent possess computers. Individuals using the internet stand at 31.70 percent of the population, says the index.
It puts cellular phone subscriptions in Egypt at 114.31 among every 100 persons.
In a sub-index of ICT in the Arab region, Egypt also maintains a low rank, coming in 11th place in the list, topped by Bahrain.
South Korea tops the IDI world chart of 167 countries.
“3.2 billion people are now online, representing 43.4 percent of the global population, while mobile-cellular subscriptions have reached almost 7.1 billion worldwide, with over 95 percent of the global population now covered by a mobile-cellular signal,” the ITU said in the opening of its report.
“By the end of this year, 46 percent of households globally will have Internet access at home, up from 44 percent last year and just 30 percent five years ago, in 2010,” it added.