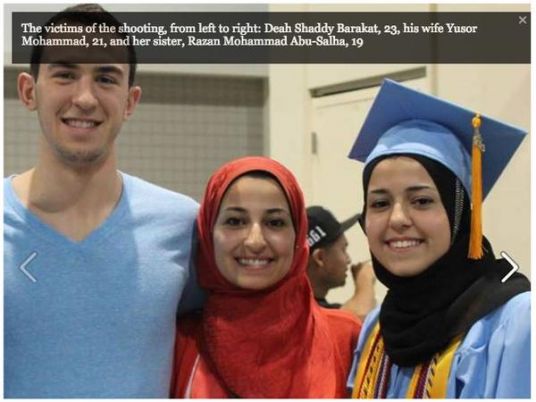 Al-Azhar, the centre of Islamic learning in Egypt, on Thursday condemned the killings of three young Muslims by a gunman in the United States as a "terrorist and racist" act.

A man who had posted anti-religious messages on Facebook and quarrelled with neighbours has been charged with the shootings.

Muslim activists in the United States and around the world have demanded authorities investigate a possible motive of religious hatred. Police said on Wednesday the case involved a dispute over parking and possibly a hate crime.

"Al-Azhar expresses its deep shock and concern at this cowardly terrorist act, which indicates that terrorism has no nationality or religion," said a statement issued by the 1,000-year-old seat of religious learning, respected by Muslims around the world.

A judge on Wednesday ordered Hicks held without bail pending a March 4 probable cause hearing.

Al-Azhar urged U.S. authorities to bring the perpetrators to justice "in order to prevent its recurrence which may lead to widening the gap between the east and the west".

Some Muslims in Arab states have accused the Western media and governments of paying too little attention to the killings, in contrast with the blanket coverage of the attack on the Paris offices of Charlie Hebdo, a satirical magazine known for lampooning radical Islam, in January.