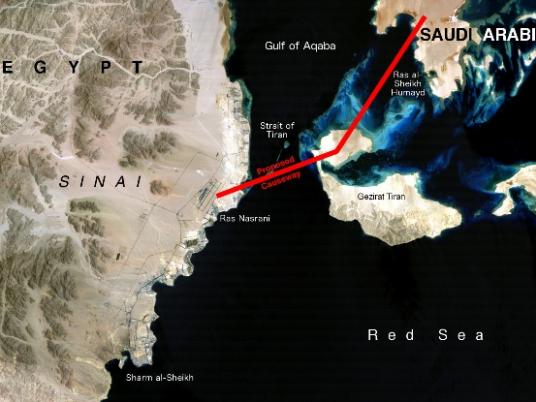 Despite earlier cautions by environmentalists to conduct proper scientific studies before commencing building, plans for the King Abdullah Bridge, which would link Egypt and Saudi Arabia, are moving forward.

Last week, in response to calls by President Mohamed Morsy, the Saudi Binladin Group announced it was willing to fund the US$3 billion project in cooperation with Egypt’s state-owned Arab Contractors.

The project, which has been in discussion since 1988, is being hailed by Morsy as an opportunity to bolster the region’s economies through increased trade. But the environmental, social and economic impacts, if not accounted for beforehand, will be much more costly in the long term.

The 32-kilometer causeway would link Sharm el-Sheikh with Ras Hamid, near Tabuk, in Saudi Arabia, passing through the ecologically significant Straits of Tiran.

Abby Stevens, a graduate student affiliated with the Red Sea Environmental Center in Dahab, says it is unknown whether an Environmental Impact Assessment was ever carried out, because such details are kept very private in Egypt.

“The lack of transparency in Egypt makes it very difficult to track down proper evidence,” Stevens adds.

Amr Ali, managing director of the Hurghada Environmental Protection and Conservation Association (HEPCA), says a proper impact assessment must be carried out before building commences.

“If the bridge comes at the risk of Tiran without a proper assessment conducted first, HEPCA will take the issue to court,” Ali says.

Ali is adamant that HEPCA supports the bridge, so long as it does not come into contact with the coral reefs. He says HEPCA is pro-economic development, despite frequent attempts by the government to portray the organization otherwise, but will not accept the sacrifice of Egypt’s natural resources for any short-term gain.

Stevens says building a bridge through a protected area should not be allowed, but the islands in the Straits of Tiran belong to both Egypt and Saudi Arabia, which are both using this as justification to break the protected area’s rules.

“They are also planning on building artificial islands, as the type of bridge they are planning on building cannot be supported without them. But this raises the technical problems of how they will construct the bridge, as nothing of this size has ever been built, especially not with the depths they will encounter over the Straits of Tiran,” Stevens adds.

Tiran, one of three protected islands in the area, is an important breeding ground for sea turtles and seabirds, and is surrounded by coral reefs that provide critical habitats for populations of dugong and a plethora of other marine life.

Construction and drilling associated with the bridge and the resultant sediment would impact water quality, which would have negative cascading effects on coral reefs, sea grass and fisheries.

For Stevens, the project seems very one-sided. Saudi Arabia would benefit from the economic and social links the bridge would bring, but Egypt would suffer long-term damage.

“The coral reefs around the Straits of Tiran and near the beginning sections of the bridge on both the Egypt and Saudi sides will take hundreds of years to recover to their current state, and this will in turn affect the local economy because of the reliance of the Sinai Peninsula on dive tourism,” Stevens notes.

She says the problem is not as serious for Saudis.

“The area the bridge will start from on the Saudi side is not a protected area, but does have a lot of coral. This is not such a big problem for Saudi, as they do not rely on the dive tourism industry the way Egypt does,” Stevens says.

With the potential to have such a big impact on the surrounding local communities and the dive tourism industry, consultations with all the potentially affected parties should have been held, he says.

“There were some consultations with the local people, but only in that it was brought up in a meeting that a member of the European diving community was invited to and he raised the issue,” Stevens says.

Since then, no consultations have been held for local communities, nor were they held for the Bedouins of the surrounding areas in either Egypt or Saudi Arabia.

The majority of the dive industry and tourism community were not consulted either, despite the obvious impacts the bridge would have on both sectors.

Another concern among locals is that the bridge would turn Sharm el-Sheikh into a party town for Saudis. In search of easily accessible alcohol, Saudi tourists on short trips to Egypt could become a nuisance for residents and other visitors. This has become the case in Bahrain since the building of the bridge linking Saudi to the island state, they say.

The bridge would provide an alternative Hajj route, and is expected to serve a million passengers and pilgrims annually. Thus, the influx of traffic, with its accompanying pollution, noise and littering, would pose further threats to the surrounding environment — factors that may initially seem minor but which could have a significant impact over time if not properly managed.

With implications so far-reaching they are often beyond the scope of what we can imagine, Baha el Din says it is imperative to anticipate the outcomes of the project and consult with local communities in an honest dialogue.

For Baha el Din, it is crucial to also conduct a social impact study.

“This is not a decision that can be made without consultation behind closed doors,” he comments.

He says the project and its implications should be exposed to people, and then a decision should be made. He calls this democracy in action.

Christian Voolstra, an expert on coral reef genomics at the Red Sea Research Center and assistant professor of marine science at King Abdullah University of Science and Technology, says, “From a short-term perspective, the economic benefits outweigh the ecological ones. But it literally pays to construct environmentally responsibly, with as little interference to ocean and marine life as possible. In the long term, it’s much cheaper to conserve than restore.

“Projects like this present an opportunity to do things right and raise public awareness,” he adds. “Somebody has to step up and be a role model.”

With the project slated to begin moving forward, the need for that role model could be more urgent than ever.