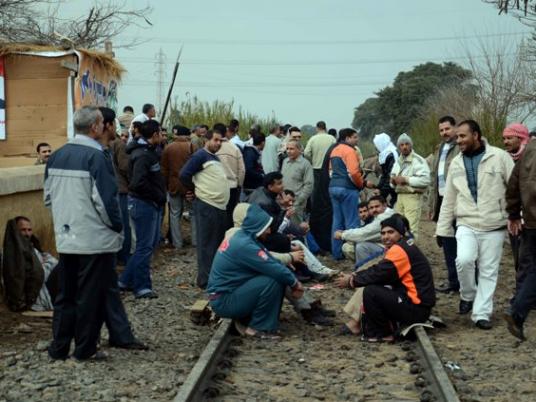 Since toppling the Muslim Brotherhood from power last year, the Egyptian army has turned its substantial economic firepower on another perceived threat to the country's stability: unemployment.

Putting to use a manufacturing portfolio that stretches from pasta and refrigerators to tablet computers, the military announced to great fanfare in April that it was offering vocational training to jobseekers in a new joint venture with the civilian government.

It was part of a push to tackle joblessness, and evidence of a more prominent role for the army's economic muscle, with its former chief, Abdel Fattah al-Sisi, the runaway favourite to become president in May 26-7 elections.

Egypt's unemployment crisis could make or break his presidency. The 2011 uprising against Hosni Mubarak was largely fuelled by anger at the grim prospects facing young Egyptians unable to find work, afford their own home and get married.

Since then, as foreign investors and tourists shied away from the country of 85 million, the job crisis has only got worse.

"The problem is a time bomb," said Mahmoud El-Sherbiny. He heads a government industrial training scheme tapping for the first time the Ministry of Military Production.

"If it does not work it will blow up in front of everyone's faces," he said. "They don't want to be faced by another revolution within the next year."

Though it may appear to be a drop in the ocean – the scheme aims to train 100,000 youths in skills needed by industry – it shows the army's readiness to back government and its evolving role in shaping domestic policy.

The beneficiaries include those at a heavily guarded complex run by the Ministry of Military Production on the outskirts of Cairo – young men and women in blue coats receiving training to be mechanics, industrial machine operators or to build circuit boards.

Accompanying journalists during a visit there in April, the State Minister for Military Production, Major General Ibrahim Younis Ismail Ragab, described the project as part of his ministry's "responsibilities towards society".

The ministry sits at the heart of an army-controlled sector of the economy likened by critics to a state within a state.

Some analysts estimate its financial empire could amount to as much as 40 percent of the economy. Sisi told Reuters in a May 15 interview it was no more than 2 percent.

The military has positioned itself as the channel for some of the billions of dollars flowing into Egypt from the Gulf, for example.

Sherbiny said the Ministry of Military Production had never before agreed to open its facilities to a civilian-run training programme.

But it is not doing it for free. The United Arab Emirates is bankrolling the scheme, part of billions of dollars in aid sent to Egypt by Gulf states hostile to the Brotherhood, and the civilian authorities pay Military Production for their services.

"The (project) adds to the image of the military as Egypt's guardians – not just in terms of politics and security, but social-economically as well – the only institution capable of addressing Egypt's multiple problems," said Oliver Coleman, senior analyst at Maplecroft risk research company.

"The military may have the economic clout to improve youth employment in some sectors – manufacturing primarily. But in terms of the overall economy, the impact will be extremely modest."

According to official rates, more than 13 percent of the Egyptian workforce are unemployed. This figure, higher than the 8.9 percent on the eve of the 2011 revolt, masks the wider problem of underemployment in a low-wage economy. Official figures rarely tell the full story in a country where much business activity goes under the radar.

A SPARK FOR REVOLT?

Sisi has listed unemployment as a priority, but has given little detail on how he will tackle it. He is eyed with suspicion by some young Egyptians who see him as a return to the army-backed order against which they rebelled in 2011.

"Now another military man will rule," said Abdelrahman, a scowling 20-year-old at a street cafe in Cairo. "If he makes one mistake as president, the entire people will revolt against him."

Like many young Egyptians idling in the coffee shops, Abdelrahman is unemployed and lives at home. He had a job at a clothing store that paid him 800 Egyptian pounds ($110) a month but was sacked for folding a shirt the wrong way. "Of course I'm angry," he said.

The government's new training scheme aims to address a skills mismatch partly rooted in a state policy that has for decades offered free tertiary education to those with adequate grades, producing a surplus of accountants and engineers who often end up driving taxis.

The Industrial Training Council (ITC), which belongs to the Industry Ministry, held a job fair earlier this year offering 20,000 jobs in the industrial sector, but only 7,000 people came, an ITC official said.

Some believe the Ministry of Military Production may be harnessed even more widely to help address the mismatch.

"The best welders in Egypt are known to have come from those (military production) centres," said Sameh Seif Elyazal, a former army general who now heads a political research centre and says he is often in contact with Sisi. "Military production is part of the entire solution."

With perhaps a fifth of graduates unemployed, changing mindsets could be a harder nut to crack.

Many youths, such as 22-year old engineering student Mohamed Abdel Kader, refuse to take up blue-collar jobs like those in the military scheme, because they are holding out for something to match their education.

"There's no way – I study for five years and then do something else? I must have an appropriate job," he said.