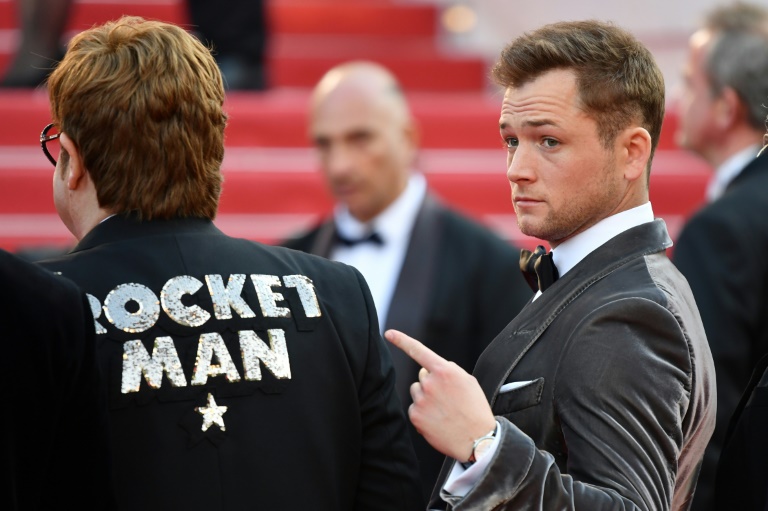 The extended standing ovation for the film brought its director Dexter Fletcher and star Taron Egerton — who plays the singer — to tears.

With some critics saying it was among the most searingly honest biopic in years, Variety’s Stuart Oldham tweeted minutes after the end that “‘Rocketman is fantastic, a musical drama that hits all the right notes, especially the sad ones.”

The Hollywood Reporter’s Rebecca Keegan was equally euphoric, lavishing praise on “hot damn Taron Egerton (who) is the real deal. ‘Rocketman’ is a musical about picking yourself up off your ass and Taron delivers the sweat, grit and vulnerability it needs.”

John could not hide his joy at the reception, hugging the cast and his longtime lyricist and friend Bernie Taupin, who is a major character the film.

The 72-year-old British musical megastar seemed to have difficulty walking as he posed for the paparazzi on the red carpet before the premiere.

Cannes director Thierry Fremaux had hinted that Sir Elton, who has admitted he nearly died from a rare viral infection two years ago, might play before the film.

“A piano will be hidden behind the curtain,” he told reporters, with the star also rumored to perform at a private party afterwards in the French Riviera resort.

He did not perform at the premiere but took part in a sing-along at the beach.

Wearing a dark suit with “Rocket Man” written in silver sequins on the back, he wiped away a tear under his heart-shaped sequined sunglasses as the lights went down in the cinema for the film to begin.

Taupin put a hand on his knee and smiled to reassure him.

AFP / LOIC VENANCE Wearing an eggshell-blue suit and matching diamond-encrusted glasses, Elton John laughed off his limp, sticking his tongue out at Taron Egerton who plays him in the film

Earlier Sir Elton laughed off what looked like a problem with his hip when he appeared for a photocall in an eggshell-blue suit and matching diamond-encrusted glasses.

Instead, the showman joked with husband David Furnish — who produced the film — and stuck out his tongue at actor Taron Egerton who plays him.

The singer said last year he would be retiring from touring after a three-year farewell tour.

AFP/File / TIMOTHY A. CLARY The flamboyant singer has been performing for five decades

Furnish said the movie, which was a decade in the making, is brutally frank about the singer’s struggles with drugs, alcohol and most of all, his sexuality.

“We didn’t want to compromise the fact we felt it had to be hard-hitting and truthful,” he said.

“I think we would have got a lot more interest (from studios)… if we’d been willing to produce a more sanitized version of Elton’s life.

“That never appealed to Elton,” he said.

“His life has had incredible moments of lightness but also moments of real darkness. We wanted to be very honest about those and not gloss them over.”

Although the film is also directed by Dexter Fletcher — who was drafted in to save the Freddie Mercury biopic “Bohemian Rhapsody” — and has a thumping jukebox soundtrack, the parallels end there, the filmmaker insisted.

That near-billion-dollar blockbuster was criticized for drawing a veil over much of the Queen frontman’s private life, something that cannot be said of “Rocketman”, Fletcher told AFP.

‘The beauty to be honest’

AFP / CHRISTOPHE SIMON Standing alongside Elton John on the red carpet was longtime lyricist and friend Bernie Taupin, and his husband David Furnish, who produced the film

“Elton is a gay man and we know that, we also know Freddie was gay,” Fletcher added.

The singer, who helped campaign for gay marriage, “gave us his blessing and the strength and the beauty to be honest. It’s real.”

While parts of Elton John’s five-decade career was lived in a hazy whirl of sex, drugs and rock ‘n’ roll, he set up his AIDS foundation in 1992, months after his friend Mercury died of the disease.

Fletcher said that despite the huge success of “Bohemian Rhapsody”, his real passion was always for “Rocketman”.

“I did what I had to do (on the Freddie Mercury film) but really my focus was always ‘Rocketman’.”

Fletcher said the film is not “an official biography,” but instead an expression of John’s own memories which, given his years of hard partying, were sometimes a blur.

“We are inside Elton’s memories of his life… things get mixed up and confused,” said the director.

“Rocketman” centres on the flamboyant performer’s relationship with his lyricist Taupin, who is played by Jamie Bell of “Billy Elliot” fame.

Cannes makes a killing on the film festival