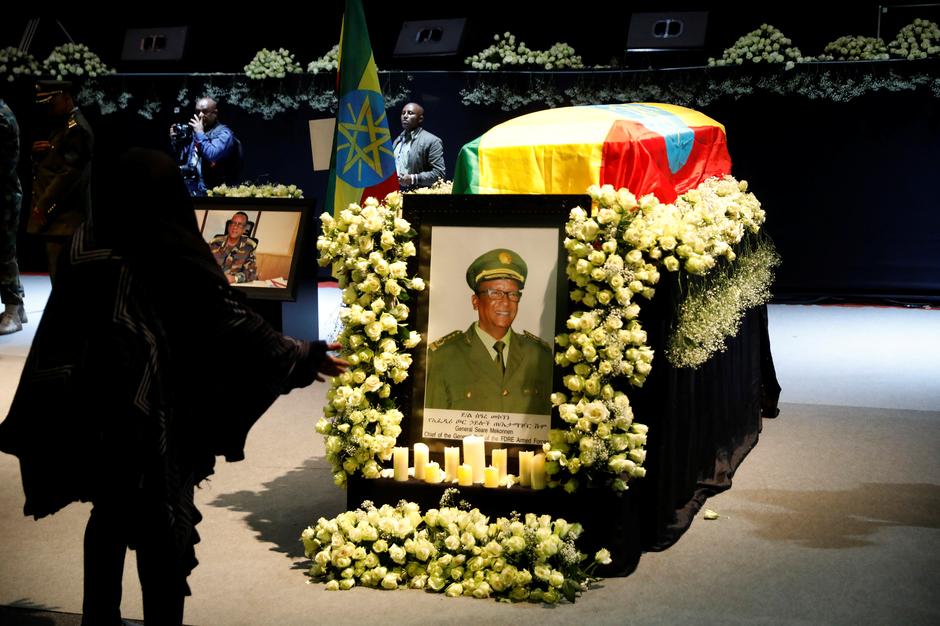 ADDIS ABABA (Reuters) – Ethiopia held a memorial on Tuesday for the army chief of staff slain with four other senior officials in weekend attacks that posed the biggest threat yet to the prime minister’s reforms.

Abiy Ahmed, who survived a grenade attack at a rally in his honor last year, sat in the front row at the memorial and wiped tears from his eyes with a white handkerchief.

Abiy took power 15 months ago and has won widespread international praise for kickstarting political and economic reforms, but his shake-up of the military and intelligence services has earned him powerful enemies at home.

His government is also struggling to contain discontent from Ethiopia’s myriad ethnic groups fighting the federal government and each other for greater influence and resources.

The foiled plot to seize control of the northern Amhara region and the assassinations in the national capital Adis Abeba underscored the threat of spiraling violence in Africa’s second-most populous nation.

In addition to the killing of the chief of staff in the capital, Amhara state president Ambachew Mekonnen and an adviser were killed in the region’s main city Bahir Dar.

The attacks were led by Amhara’s head of state security General Asamnew Tsige, who had been openly recruiting fighters for ethnic militias in a state that has become a flashpoint for violence.

In addition to the killing of the chief of staff in the capital, Amhara state president Ambachew Mekonnen and an adviser were killed in the region’s main city Bahir Dar.

The attacks were led by Amhara’s head of state security General Asamnew Tsige, who had been openly recruiting fighters for ethnic militias in a state that has become a flashpoint for violence.

Asamnew, the alleged coup plotter, was shot on Monday near Bahir Dar, according to the prime minister’s office.

Hundreds of soldiers and officers in uniform gathered for the ceremony in a huge hall in central Addis Ababa.

Roads in the capital were blocked for the ceremony and security was tight. Access to the internet appeared to be blocked across Ethiopia for the third straight day, users reported.

The coffins of army chief of staff Seare Mekonnen and a retired general, both shot dead on Saturday by Seare’s bodyguard in the national capital Addis Ababa, were wheeled into the hall, draped in Ethiopian flags.

Photographs of the men in formal military dress were adorned with yellow roses. Seare will be buried in his home region of Tigray on Wednesday.

At the memorial, the army’s deputy chief of staff General Birhanu Jula spoke of the chief of staff’s bravery in the guerrilla war against the Communist Derg regime that was toppled in 1991 and his leadership role in Ethiopia’s war against neighboring Eritrea in the late 1990s.

The weekend killings came as Ethiopia prepares to hold parliamentary elections next year, although the electoral board warned this month that they were behind schedule and that instability could delay polling.

Ethiopia analysts say the prime minister must also tread carefully as he tries to restore security. Too strong a response risks derailing his reforms and angering a polarized population. But failure to punish those responsible could see violence could spiral out of control.

Mehari Taddele Maru, an independent Ethiopian analyst, said the government should channel public anger through dialogue, but if ethnic rivalries spread to the federal armed forces, that could destroy the state, he said.

Image: A mourner stands in front of the coffin of Army Chief of Staff Seare Mekonnen, who was shot by his bodyguard, during a memorial ceremony in Addis Ababa, Ethiopia June 25, 2019. REUTERS/Baz Ratner