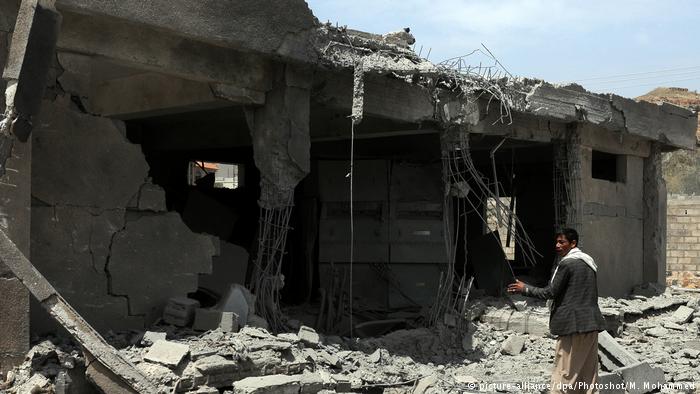 On Sunday, an air raid struck a wedding party in Yemen, where local sources estimate that more than 2o people were killed and up to 50 were wounded. The airstrikes were blamed on Saudi Arabia, whose government  is aiming to defeat the Iran-backed Houthi rebels in southern Yemen

Although Saudi airstrikes in Houthi-controlled areas have often killed civilians over the course of Yemen’s seven-year civil war, EU nations — France and Britain chief among them — have done little to condemn the attacks and have not come close to directly intervening in the conflict. “Both Britain and France sell arms to Saudi Arabia, which means they have no interest in dealing with the humanitarian catastrophe there,” Günter Meyer, the director of the Centre for Research on the Arab World at the University of Mainz, told DW. “EU countries have moral obligations to assist in the Yemeni conflict, but economic and political considerations with Saudi Arabia have first priority.”

Ali al-Absi, a Yemeni researcher who specializes in EU affairs and a consultant at the Arab-German Chamber of Commerce and Industry (Ghorfa), told DW that EU countries were also dissatisfied with Yemen’s Saudi-backed government and were therefore wary of providing financial assistance to a regime that has proved to be “inefficient.” There are also accusations that members of Yemen’s government are corrupt. Moreover, he said, EU nations might see Saudi Arabia and the United Arab Emirates as very rich countries that can provide humanitarian assistance and deal with the Yemeni conflict without the need of another party.

What many observers find troubling is not just a lack of willingness for humanitarian intervention on the part of EU countries, but a lack of willingness to even condemn the aggression. Because EU nations such as Britain and France have close ties to Saudi Arabia through the arms trade and other economic arrangements, many are often silent when civilians are killed by the kingdom’s airstrikes, which have killed thousands of the up to 10,000 people who have died in Yemen’s conflict. In April 2016, according to Reuters, more than 60 percent of the deaths in Yemen were caused by Saudi airstrikes. France and the UK also have close political alliances with Crown Prince Mohammed bin Salman, who leads the kingdom. According to Reuters, French defense contractors delivered €2 billion in equipment to Saudi Arabia in 2015. Statistics published by Britain’s Department for International Trade in October showed that in the first half of 2017, arms sales from the UK to Saudi Arabia topped €1.25 billion. Human rights organizations such as Amnesty International have often criticized these arms deals.

In January Germany stopped exporting weapons to countries involved in Yemen’s war. Ghorfa’s al-Absi said one possible reason why Chancellor Angela Merkel’s government could just halt weapons sales to Saudi Arabia is that the arms industry is less essential to Germany’s gross domestic product than it is to the GDPs of France and the UK.

Refugees are another reason why EU nations have been so interested in bringing Syria’s civil war to an end while largely ignoring Yemen’s. Up to 1 million of the more than 11 million displaced Syrians have sought refuge from the war in EU countries. The situation is different with Yemen, al-Absi said. Instead of attempting to reach Europe as refugees via a nearly impossible land route that would force them to transit Saudi Arabia and possibly Syria, Iraq or both, displaced people there are fleeing to the remaining safe areas within the country. About 3 million people are internally displaced within Yemen, and unless they attempt to make the dangerous journey to Europe, the EU simply has less of a stake in the conflict than it does in Syria’s civil war, al-Absi said. As President Bashar Assad continues to capture more and more territory from the rebels in Syria, however, EU leaders may belatedly turn their eyes to the Middle East’s other pressing humanitarian crisis: Yemen.