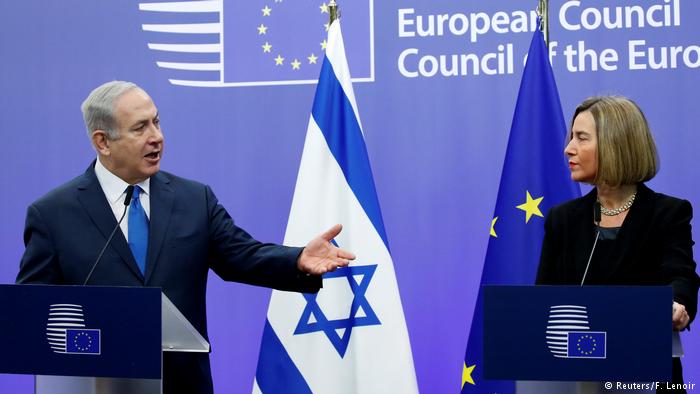 Prime Minister Benjamin Netanyahu took his case to Europe to ask allies to join the United States in recognizing Jerusalem as Israel’s capital, but met a firm rebuff from EU foreign ministers who saw the move as a blow against the peace process.

Palestinian President Mahmoud Abbas, meanwhile, took his own case to Egypt on Monday and was expected to fly to Turkey for a meeting of Muslim countries this week, cementing support from leaders who say the US move was a dire error.

President Donald Trump announced last Wednesday the United States would recognize Jerusalem as Israel’s capital, breaking with decades of US policy and international consensus that the city’s status must be left to Israeli-Palestinian talks.

Palestinian militants in Gaza fired a rocket into Israel and the Israeli military said it responded with air strikes and tank fire targeting a position of Hamas, the Islamist group that controls the enclave.

On the ground in the Palestinian territories, violent clashes with Israeli security forces in which scores of Palestinians have been injured and several killed since the US announcement last week appeared to have mostly subsided.

Netanyahu, on his first visit to EU headquarters in Brussels, said Trump’s move helped peace, “because recognizing reality is the substance of peace, the foundation of peace”.

Israel, which annexed East Jerusalem after capturing it in a 1967 war, considers the entire city to be its capital. Palestinians want East Jerusalem as the capital of a future independent state.

The Trump administration says it remains committed to the peace process and its decision does not affect Jerusalem’s future borders or status. It says any credible future peace deal will place the Israeli capital in Jerusalem, and ditching old policies is needed to revive a peace process frozen since 2014.

But even Israel’s closest European allies have rejected that logic and say recognizing Israel’s capital unilaterally risks inflaming violence and further wrecking the chance for peace.

After a breakfast meeting between Netanyahu and EU foreign ministers, Sweden’s top diplomat said no European at the closed-door meeting had voiced support for Trump’s decision, and no country was likely to follow the United States in announcing plans to move its embassy.

“I have a hard time seeing that any other country would do that and I don’t think any other EU country will do it,” Margot Wallstrom told reporters.

Israel’s position does appear to have more support from some EU states than others. Last week, the Czech foreign ministry said it would begin considering moving the Czech Embassy from Tel Aviv to Jerusalem, while Hungary blocked a planned EU statement condemning the US move.

But Prague later said it accepted Israel’s sovereignty only over West Jerusalem, and Budapest said its long-term position seeking a two-state solution in the Middle East had not changed.

“I‘m convinced that it is impossible to ease tension with a unilateral solution,” Zaoralek said. “We are talking about an Israeli state but at the same time we have to speak about a Palestinian state.”

The Palestinian president, Abbas, met Egypt’s President Abdel Fatah al-Sisi in Cairo, as well as the head of the Arab League. Egypt, a US ally with a peace treaty with Israel, has brokered Israeli-Palestinian deals in the past.

Moving the US embassy in Israel to Jerusalem would have “dangerous effects on peace and security in the region”, Sisi said on Monday at an earlier meeting with visiting Russian President Vladimir Putin.

Abbas was also due to fly to Turkey. Trump’s announcement has triggered a war of words between Turkish President Tayyip Erdogan and Netanyahu, straining ties between the two US allies which were restored only last year after a six-year breach that followed the Israeli storming of a Turkish aid ship.

On Sunday, Erdogan called Israel a “terror state”. Netanyahu responded by saying he would accept no moral lectures from Erdogan who he accused of bombing Kurdish villages, jailing opponents and supporting terrorists.

On Monday Erdogan took aim directly at Washington over Trump’s move: “The ones who made Jerusalem a dungeon for Muslims and members of other religions will never be able to clean the blood from their hands,” he said in a speech in Ankara. “With their decision to recognize Jerusalem as Israel’s capital, the United States has become a partner in this bloodshed.”

Trump’s announcement triggered days of protests across the Muslim world and clashes between Palestinians and Israeli security forces in the West Bank, Gaza and East Jerusalem.

In Beirut, tens of thousands of demonstrators took to the streets to protest at a march backed by Hezbollah, the heavily-armed Iran-backed Shi‘ite group whose leader called last week for a new Palestinian uprising against Israel. An announcer led the crowd in chants of “Death to America! Death to Israel!”

Hezbollah leader Sayyed Hassan Nasrallah told the crowd by video link the group was turning its focus back toward the fight against Israel: “Today the axis of resistance, including Hezbollah, will return as its most important priority … Jerusalem and Palestine and the Palestinian people and the Palestinian resistance in all its factions.”

Netanyahu, who has been angered by the EU’s search for closer business ties with Iran, said Europeans should emulate Trump’s move and press the Palestinians to do so, too.