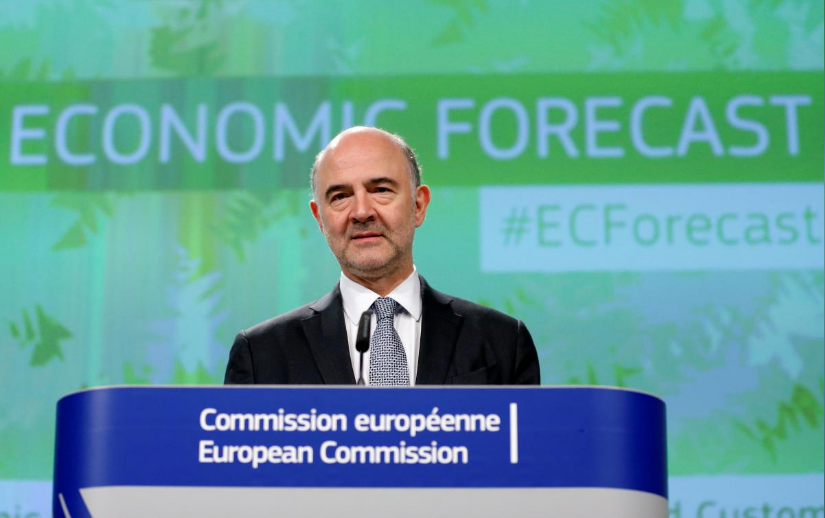 Euro zone economic growth will slow this year and next from a peak expansion in 2017, the European Commission forecast on Thursday, underlining the need to quickly implement euro zone reforms while the expansion is still strong.

The Commission forecast that economic growth in the 19 countries sharing the euro would slow down to 2.0 percent next year from 2.3 percent expected this year after it peaked at 2.4 percent in 2017.

“Overall, the risks to the forecast have risen and are now tilted to the downside,” the Commission said.

Among the risks, the Commission listed financial market volatility, the pro-cyclical fiscal stimulus in the United States that could lead to overheating and a faster rise in U.S. interest rates and an escalation of trade protectionism.

“To be more resilient, we also have to make sure we have the capacity to use macroeconomic policy in the future, which means we need to continue reducing debt; and we need an ambitious push to complete the Economic and Monetary Union,” the head of the Commission’s economics department Marco Buti said.

He said the risks made it all the more important for EU leaders push ahead with euro zone reform in June.

“The June European Council must not postpone crucial decisions. It is wise to repair the roof while the sun is shining; but when dark clouds already gather on the horizon the task becomes urgent,” Buti said.

The leaders are to decide in June on the path to introduce a European deposit insurance scheme (EDIS) and provide a backstop for a euro zone bank resolution fund in case it were to run out of money during a major banking crisis.

They are also expected to decide on turning the euro zone bailout fund into a European Monetary Fund with wider powers, including sovereign debt restructuring and regular monitoring of economies.

The Commission forecast that euro zone inflation, which the European Central Bank wants to keep below, but close to 2 percent, would accelerate to 1.6 percent in 2019 from 1.5 percent expected this year.

Euro zone aggregated government deficit is to shrink further to 0.6 percent of GDP in 2019 from 0.7 percent seen this year and debt is to fall to 84.1 percent of GDP next year from 86.5 percent expected this year.

China, Russia and Saudi Arabia give EU trade reforms thumbs down at WTO