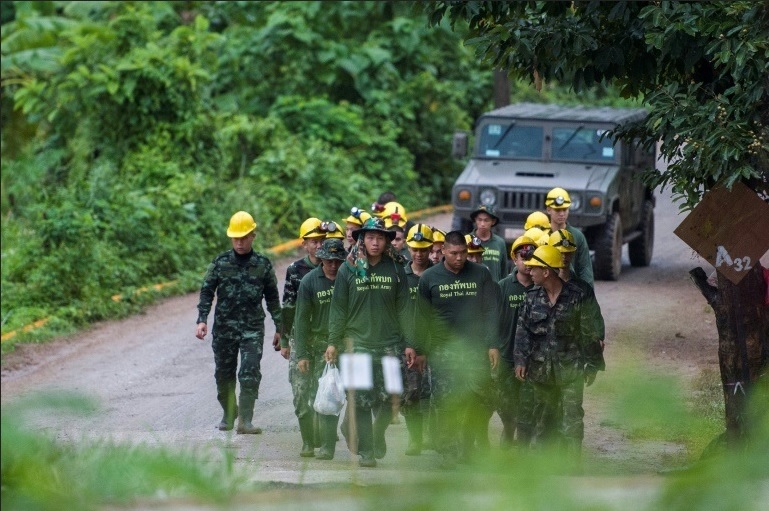 Rescuers will on Tuesday extract the remaining five young footballers who have been trapped deep inside a flooded Thai cave for 18 days, the mission chief said, as heavy rains threatened their perilous escape route.

The hoped-for final chapter in an ordeal that has gripped the world comes after elite foreign divers and Thai Navy SEALs escorted eight members of the “Wild Boars” football team out of the claustrophobic network of tunnels on Sunday and Monday.

The boys, aged from 11 to 16, and their 25-year-old coach, ventured into the Tham Luang cave on June 23 after football practice and got caught deep inside when heavy rains caused flooding that trapped them on a muddy ledge.

With rain again pounding the cave site in a mountainous region in northern Thailand on Tuesday morning, rescuers said they were aiming to bring out the remaining four boys and their coach by the evening.

“(They) will be extracted today,” rescue chief Narongsak Osottanakorn told reporters, adding the journey out should be faster than on previous days.

The emergence of the second batch of four boys on Monday evening was greeted with a simple “Hooyah” by the SEAL team on their Facebook page, an exclamation that lit up Thai social media, while positive medical reports on the rescued group further fuelled the sense of joy.

“All eight are in good health, no fever… everyone is in a good mental state,” Jedsada Chokdamrongsuk, permanent secretary of the public health ministry, told reporters Tuesday at Chiang Rai hospital where the boys were recuperating.

However the boys — aged between 12 and 16 — would remain in quarantine until doctors were sure they had not contracted any infections from inside the cave.

Experts warned that drinking contaminated water or otherwise being exposed to bird or bat droppings in the cave could lead to dangerous infections.

But the early signs were promising, with X-rays and blood tests showing just two had signs of pneumonia and that they were in a “normal state” after taking antibiotics, Jedsada said.

The ups and downs of the rescue bid have entranced Thailand and also fixated a global audience, drawing support from celebrities as varied as US President Donald Trump, football star Lionel Messi and tech guru Elon Musk.

The boys and their coach spent nine harrowing days trapped in darkness until two British divers found them.

Authorities then struggled to devise a safe plan to get them out, mulling ideas such as drilling holes into the mountain or waiting months until monsoon rains ended and they could walk out.

Following a similar pattern as the previous two days, the divers ventured back into the cave at 10:00 am (0700 GMT) on Tuesday, Narongsak told reporters.

However, unlike Sunday and Monday when only four were brought out each day due to logistical constraints, rescuers would try to extract all of the remaining five in one operation, Narongsak said.

A doctor and three SEALS who had stayed with the footballers would also come out on Tuesday, he added.

Sunday and Monday’s rescue missions took between nine and 11 hours.

“Today we hope to be faster,” Narongsak said.

The escape route is challenge for even experienced divers. The boys have no previous diving experience so the rescuers have been training them how to use a mask and breathe underwater via an oxygen tank.

One fear has been that they may panic while trying to swim underwater, even with a diver escorting them.

Although there have been no major reported complications during the initial rescues, the death of a former Thai Navy SEAL diver who ran out of oxygen in a flooded area of the cave on Friday underscored the dangers of the journey.

Meanwhile, family and friends of the stricken group continued to dream of being reunited.

“I want him to be healthy and come back to study quickly,” Phansa Namyee, classmate of 16-year-old footballer Night said.

“I want to go play with them… take him to some restaurants and spend time together.”